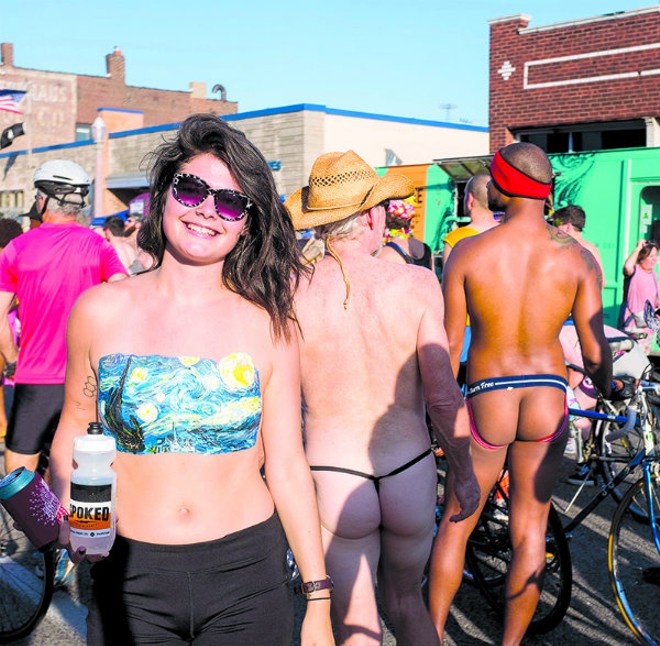 Photo by Jarred Gastreich.
“The best masterpieces out here are the people who are comfortable enough with themselves to just be," Jessica Leitch told us at last year's World Naked Bike Ride. "Bare or not.”
Get ready to get naked.

The 9th Annual World Naked Bike Ride will roll into the Grove on Saturday, July 16. The international event famously encourages participants to bike ride in the buff — or "as bare as you dare" — to promote positive body image and raise awareness for cyclist's rights and vulnerability on the road.

Of the 70 cities hosting World Naked Bike Rides around the world last year, St. Louis had the third largest event. Only Portland and Philadelphia had larger rides — and the Gateway City even beat out Chicago in attendance for the first time.

Tatyana Telnikova, who is owner of the bicycle-themed HandleBar (as well as the new Cherokee Street bar Propaganda), says the organizers look forward to another great event for St. Louis this year.

“This event has really grown over the years, but the message is still the same — we all look different on the outside, but on the inside we’re all the same, and we just love to pedal," Telnikova said in a press release. "The overwhelming support by our riders, spectators, partner organizations, businesses, business districts and the City of St. Louis has grown the ride tremendously."

The festival will begin at 5 p.m. and feature street vendors and live music. Put some thought into your attire (or lack thereof) as well — there will be contests awarding various categories for the best body paint, the best themed costumes and more.

The bike ride will take off at 7 p.m. and conclude back in the Grove around 8:30 p.m., but don't plan to leave then — the party will continue until around 11 p.m. Ride organizer and Spoked Bikes & Stuff owner/founder Matt Hartman describes it as "a celebration of the human spirit."

"We’re celebrating our bodies, our bikes and our city while sharing a common goal - having immeasurable amounts of fun," Hartman said in a press release.

For the route and other details, visit www.wnbrstl.org and the St. Louis World Naked Bike Ride Facebook page.