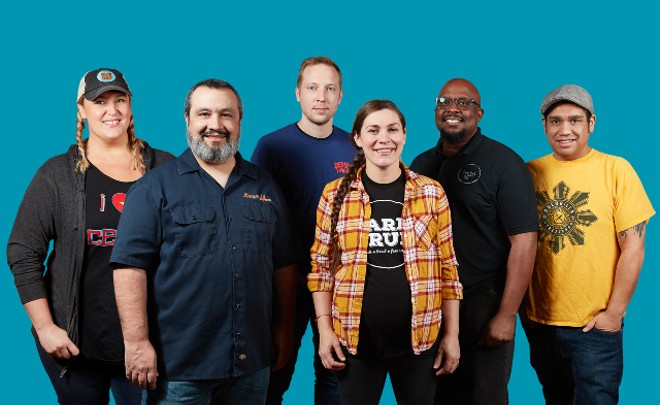 COURTESY 9 MILE GARDEN
The food-truck garden will offer a rotating selection of food trucks for lunch and dinner six days a week.


This spring, when the 9 Mile Garden (9375 Gravois Road, Affton) food-truck garden debuts in Affton, it will feature some of the very best chefs working in the St. Louis area.


In November we learned of initial plans for 9 Mile Garden, including its plan to feature some of the area's best food trucks for lunch and dinner six days a week. Last month came news that the food-truck garden would feature the Canteen, a "modern drafthouse" that will "serve as an anchor" for the outdoor entertainment district.

Today, the names of the 30 partnering food trucks have been announced. Currently the plan is for vendors to each be on-site two days a week as well as at special events in the evenings, according to a recent release. The press statement also notes that guest trucks will vend at the garden from time to time.

The food-truck garden's opening roster is set to include the following vendors:
“We’re both excited and honored to have such a stellar lineup of trucks at 9 Mile Garden,” 9 Mile Garden managing partner Brian Hardesty said in the release. “We’re bringing the best of the local food truck scene to our visitors, as well as providing a dedicated place for trucks to serve their food and grow their businesses.”

Located in Affton Plaza, a shopping center owned and operated by Seneca Commercial Real Estate, 9 Mile Garden will be the first permanent location in the area to assemble such a broad and impressive lineup of food trucks. Upcoming vendors such as Samantha Mitchell of Farmtruk and Bryan Scott of Doggie Mac’s shared their excitement and enthusiasm for the project in the release.

“Farmtruk is proud to be part of this core group of trucks at 9 Mile Garden,” Mitchell said. “This is so exciting for our city because it will provide a stable place where people can go to find their favorite trucks. Major cities all have food truck parks like this; it’s a progressive move for St. Louis.”

“This is the future of food trucks in St. Louis,” Scott said. “It’s the kind of thing I envisioned when I opened my truck, and it’s what will drive the popularity of food trucks over the top in St. Louis. We all enjoy having a variety of foods in one place, and when you add in the opportunity to socialize and gather as a community, it’s a game-changer for our city. There’s nothing like it here.”

In addition to queuing up "a daily rotation of St. Louis’ best and most beloved food trucks," 9 Mile Garden aims to be a hub for entertainment of all types, from livestreams of sporting events to live performances. In addition to public events, the park will be available to rent for private events including weddings, corporate gatherings and fundraisers. The garden's name is inspired by "the days before streets had names or road markers, where landmarks were named for their distance from the courthouse or city center."

Located nine miles from the Old Courthouse in downtown St. Louis, 9 Mile Garden's name is an homage to "a time in St. Louis history when farmers would drive their harvests to an open space and line up their trucks into a formation that allowed people to walk along and choose what items interested them most. These were called 'truck gardens,' and Affton was known for having a high concentration of them."

To learn more about 9 Mile Garden, visit its website or follow the business on social media via @9milegarden.