After Years of Darkness, Stag Finally Brings Back Its Classic Logo 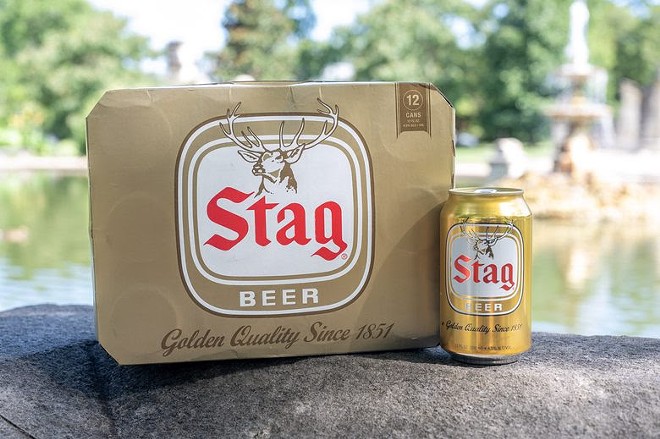 By all accounts, it's been a rough few years.

We've been cast into a fog of uncertainty for too long, wondering if we'll ever get our old lives back, and whether we can ever expect to return to the way things were in 2019. We've been asked to accept the unacceptable, a "new normal" that pales in comparison to the glory days of old. Put plainly, we've been pushed to the brink.

We're talking, of course, about the tribal-tattoo redesign of Stag's logo that was inflicted upon us in May 2019, rendering our beloved deer beer's appearance into one evoking an Affliction T-shirt. Tears were shed and teeth were gnashed when that godawful design was unleashed upon an unprepared world, and some among us thought we'd never see a light at the end of the tunnel.

But now, mercifully, the makers of the Belleville-born brew have announced that they'll be leaving that redesign in the trash where it belongs, and the classic logo that's such a work of art one south city man converted his whole home into a shrine celebrating it will make its triumphant return.

The announcement came Wednesday afternoon via a press release.

“We know how special this beer is to the Belleville and St. Louis area," says Stag Beer Brand Manager Adam Powers. "Returning to the classic logo and motto is our way of saying thank you for supporting this brand for over 170 years.”

To celebrate its return to sanity, Stag is partnering with local clothing brand Golden Gems for the release of a limited edition T-shirt — interested parties should keep an eye on the brand's Instagram page for more news on that. Meanwhile, Stag has a plethora of merch currently available on its website that sports its classic logo.

In all, it's a welcome return to form for a beloved brew adored by cheap young drunks and lifelong alcoholics alike, and a reassuring sign that things can get better if we all just want it bad enough (and, in this specific case, if so many hipsters abandon their former beverage of choice for High Life that it starts affecting parent company Pabst's bottom line).

We'll drink to that!