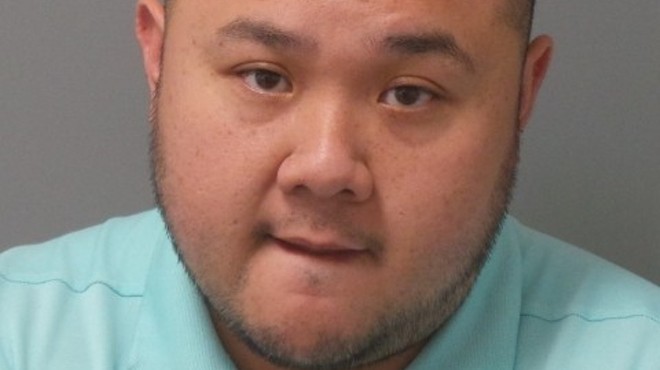 Warning: The following story contains a graphic description of a domestic assault.

According to a probable cause statement filed by St. Louis Metropolitan Police officer Kim Hayes, Nguyen's wife (named "J.N." in the report) told police on September 19th that "she and her husband ... got into an argument that turned physical when Nguyen put a pillow over J.N.'s face and told J.N. 'I should kill you.' J.N. could not breathe when the pillow was over her face and she briefly lost consciousness."

"Nguyen took the pillow off of J.N.'s face and struck her around the chest, shoulders and face with his fists. Nguyen then took a kitchen knife and held it to J.N.'s throat, again saying he was going to kill J.N. When J.N. would not stop screaming, Nguyen took a towel, shoved it into J.N.'s mouth and told her to stop screaming."

Officer Hayes' statement concludes with an observation of the victim's injuries, including extensive bruising on her body, including the shoulders, chest, arms and face, as well as a "bone protruding in an unnatural manner on J.N.'s left shoulder."

Nguyen appeared by video from the St. Louis City Justice Center today at noon in the St. Louis Circuit Court for a bond hearing, where he was represented for the purposes of that hearing only by attorney Eric Bernhardt. During the hearing, Assistant Circuit Attorney Jonathan Phipps read a victim impact statement, with Nguyen's victim alleging a 10-year pattern of escalating abuse that consisted of daily mental and physical torment that sometimes led to physical altercations.

Judge Joseph P. Whyte ordered Nguyen be released on house arrest on a $50,000 cash bond to his mother, Nhutuyet (Tuyet) Nguyen. As a condition of his release, Nguyen is subject to 24/7 electronic surveillance, is to have no direct contact with the victim and is to not come within 500 feet of the victim's address. Judge Whyte also ordered Nguyen's mother and sister to serve as intermediaries between the victim and Nguyen on matters strictly related to running the business.

Nguyen opened Snō on Aug. 19 with his wife, Jessica. The couple relocated from Los Angeles to St. Louis to open the restaurant near Nguyen's parents.

At the hearing, Nguyen stated that the restaurant remains open and is being run by his mother. Court records show Nguyen posted bond not long after this afternoon's hearing.