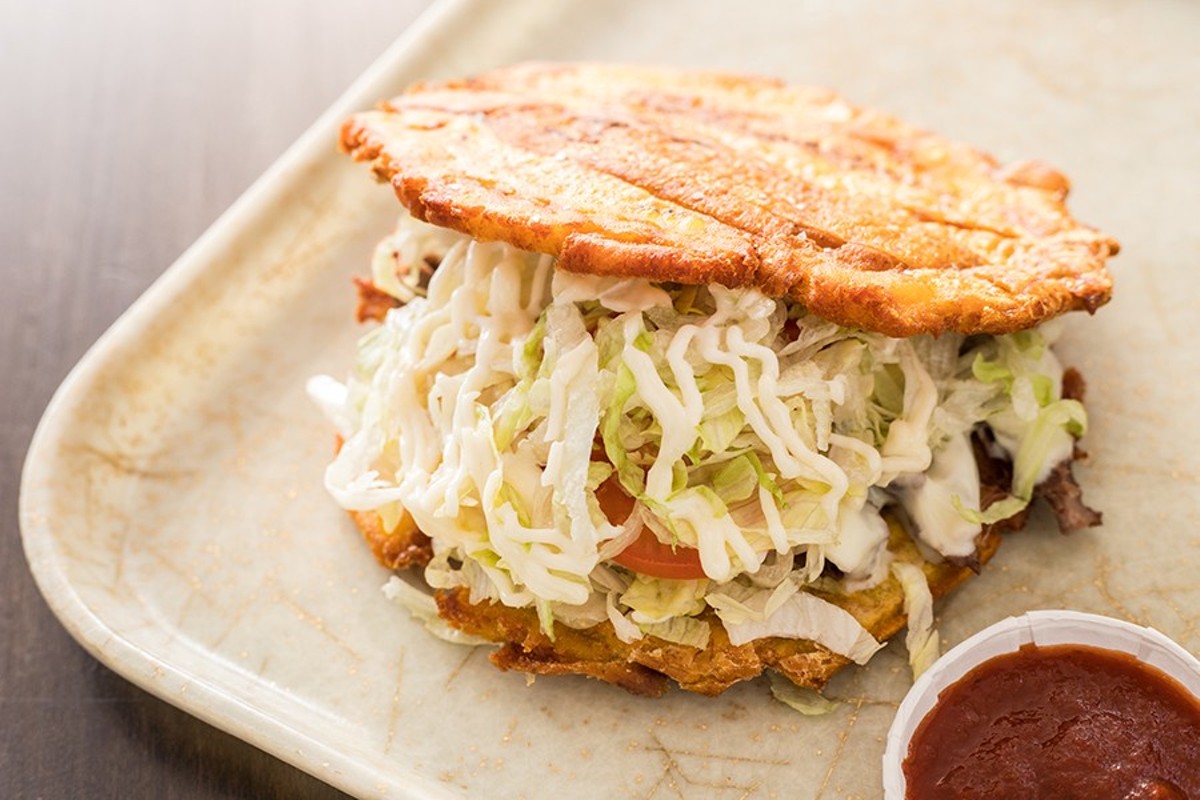 As a whitebread Midwesterner cooking Caribbean food, Mandy Estrella understands that she will raise some eyebrows. The depth of that skepticism was revealed to her one day when a Colombian woman came in to Estrella's food counter, the Alphateria, and gave her a grilling. Unconvinced that the St. Louis native could do justice to Caribbean cuisine, she insisted that Estrella come clean and tell her who was really doing the cooking, even while quizzing her on techniques, ingredients and the nuances of each island's cuisine.

After devouring Estrella's take on the Caribbean braised flank steak ropa vieja, the woman was so impressed that she asked to speak with Estrella again. As she gushed about how authentically the dish was prepared, she gave Estrella a sly smile and asked one final question: "OK, who really cooks the food?"

Estrella, the self-styled "Plantain Girl," is indeed the culinary force behind her Dominican-inflected food counter, the Alphateria. And from the taste of that ropa vieja, you would think that she had been cooking Caribbean food her entire life.

In fact, Estrella's foray into the cuisine began about fifteen years ago in Orlando. Though she had attended culinary school at St. Louis Community College at Forest Park with a plan to be a banquet manager, her time in Orlando made her realize she would not be successful at that job in a resort community. Instead, she switched gears to the front of the house, where she found that serving and bartending provided a more lucrative living. 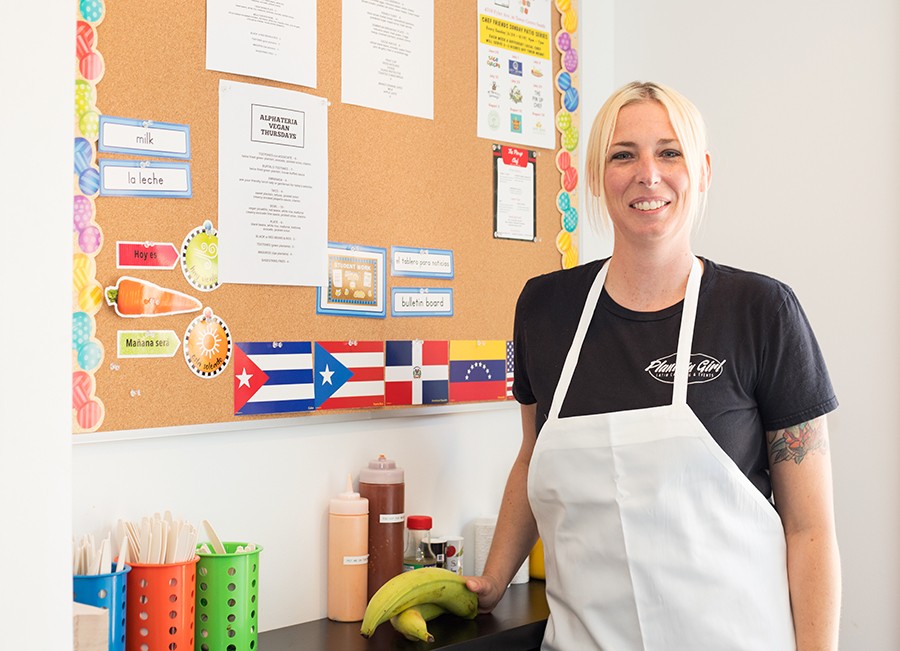 While working in Orlando, Estrella met a Dominican man, now her ex-husband, who introduced her to his native country's cuisine. Though she had tried Caribbean food before, she was blown away once she got a taste of truly authentic cooking. She wanted to explore every aspect of it.

Estrella returned to St. Louis with eyes wide open to the city's lack of proper Caribbean food, even with a tight-knit Latin community to support such a scene. At first, she cooked out of necessity to sate her and her family's cravings for the flavors they'd enjoyed in Florida. As she became increasingly confident in her abilities, however, she sensed a business opportunity. She began catering to the local Latin community and exploring the idea of opening an eatery.

Estrella didn't have the funding for a full-scale restaurant, but the rise of food trucks, counters and pop-ups made it possible to get her food in front of diners. After forging a connection with the owner of the Crafty Chameleon in west county, Estrella began doing regular pop-ups at his restaurant and then at Six Mile Bridge Beer and ANEW test kitchen. 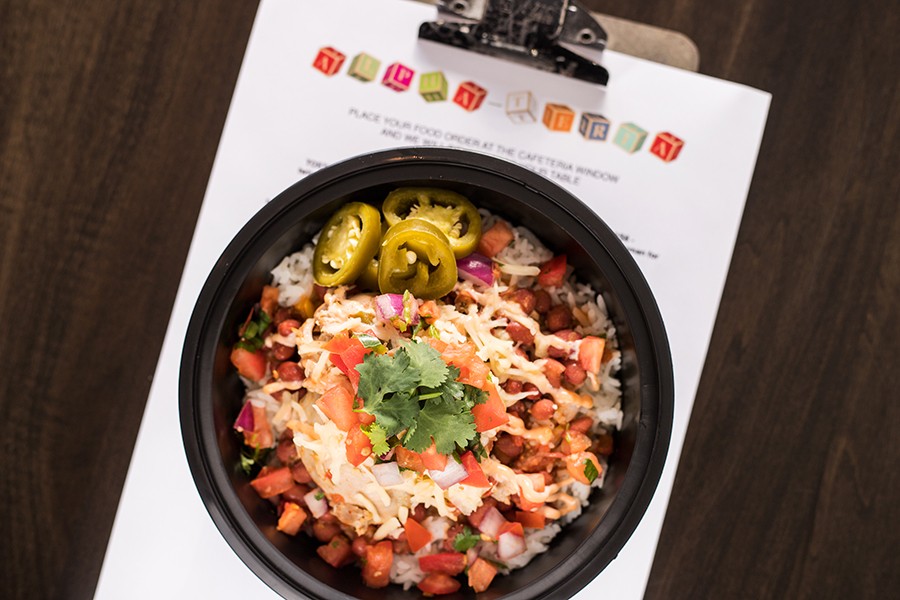 Pleased with the response she was getting, Estrella built the Plantain Girl brand as she worked on figuring out the next steps. Her path would become clear when she was approached by Alpha Brewing's owner, Derrick Langeneckert, about running the food service at his brewery's new Tower Grove South digs. Feeling as if she was being gifted the perfect opportunity, Estrella took him up on his offer, and this past March, opened the Caribbean-inflected Alphateria inside the spacious new brewery.

Much like a food truck, Alphateria is a walk-up operation where guests order at the window, grab a table flag, then wait for their food to be delivered as they sit either inside the brewery or on its large outdoor patio. The kitchen is tiny, no larger than a concession stand, but what Estrella and her team do within the small space is nothing short of magical. 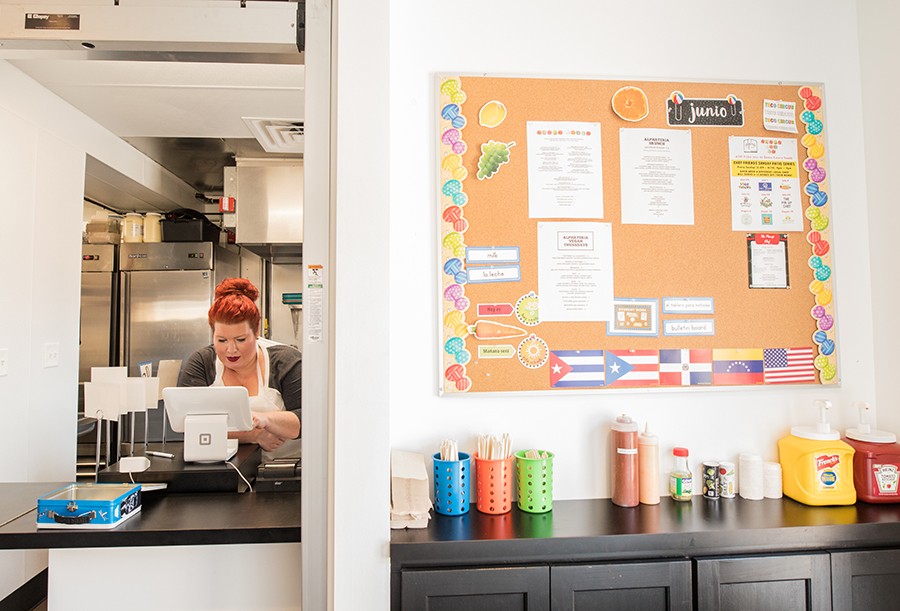 MABEL SUEN
Alphateria has its own dedicated order counter.

Consider the empanadas: two golden, flaky pillows that on my visit were filled with succulent ground beef. Somehow, the deep-fried pocket manages to contain both a heaping quantity of meat as well as its seasoned cooking liquid; when pierced, the latter drips out like savory gravy, waiting to be soaked up by the empanada's crispy, pie-like edges.

Just as the empanadas change regularly, so do the tacos; on one occasion, juicy shreds of roasted chicken thigh filled soft flour tortillas. Ripe tomatoes and crisp lettuce served as a garnish, and a smoky spiced cream mingled with the chicken jus to form a mouthwatering sauce that could not be contained by the tortilla. I was so enraptured by the taste that I didn't mind the mess.

Hush puppies, flecked with herbs and fried, are dense but not tough; dunking them in the accompanying Cajun remoulade sauce evokes the quintessential side dish you'd get at a dockside restaurant in south Florida. 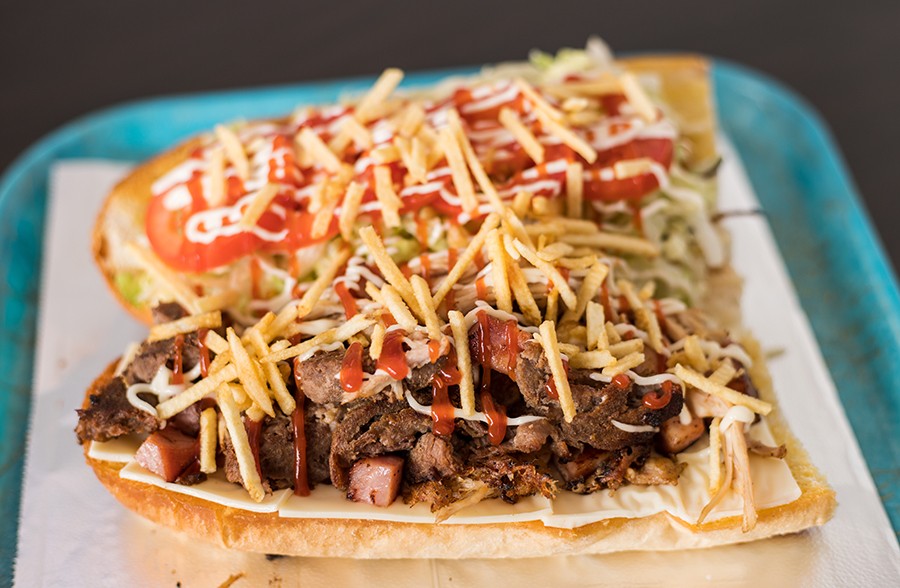 Estrella's tostones and maduros orient those thoughts even further south. Both deploy Plantain Girl's namesake fruit. In the former, they're smashed and fried, tart like an unripe banana but not at all sweet. The sprinkle of sea salt and accompanying spicy aioli underscores the savory flavor profile. The latter, a ripe style of plantain, might as well be an entirely different food; creamy and sweet, the rich fruit caramelizes around the edges when fried, giving it a brown sugary character. It's dessert.

As authentically Latin as her cooking may be, though, Estrella cannot help but add a bit of south city to the menu. There, in all of its Super Bowl party glory, is the positively addictive "Fire Drill Chicken Dip," more commonly known as Buffalo chicken dip. Perhaps, as Estrella's partner Bradley Payne says with a half-embarrassed tone, it's a bit "hoosier," but I have no shame. This luscious bowl of searing hot chicken and cheese burns with its Frank's Red Hot base, then tempers the heat with rich cream cheese. Salty tortilla chips make the perfect dipper for this unexpected treat. Dress me in a pair of jorts and hand me a Schlitz; it might be my favorite thing on the menu. 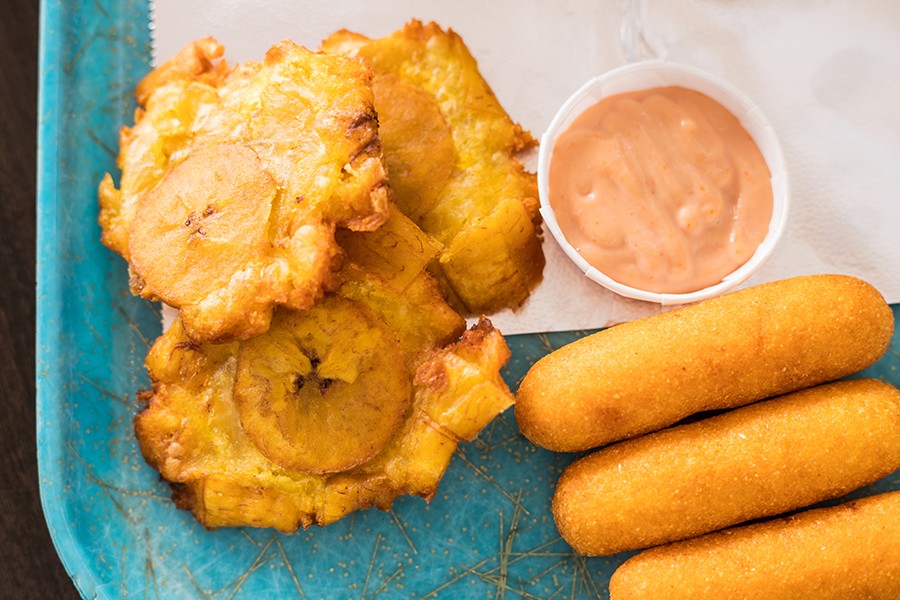 Then again, it's difficult to top the pork grilled cheese, in which butter-griddled, thick-sliced bread layered with cheddar and Swiss serves as a canvas for hunks of tender roasted pork. A slick of tangy mango-barbecue sauce cuts through the richness, adding just enough sweetness to offset the rich, salty taste of pork and cheese.

Estrella further proves her Caribbean sandwich-making prowess on the jibarito. In place of bread, two patties of smashed plantains, sprinkled with coarse salt, serve as the sandwich's base. Chopped marinated steak covered with melted Swiss cheese evokes a Dominican-style Philly cheesesteak; a chiffonade of crisp iceberg lettuce, sliced ripe tomatoes and rich garlic mayonnaise only add to East Coast vibe. It's as if Tony Luke's opened an outpost in Santo Domingo.

Estrella stands behind both the quality and authenticity of all of her food, but if she is especially proud of one dish, it's the ropa vieja, a quintessentially Caribbean dish of flank steak that is braised like pot roast and served over white rice and black beans. A garnish of pickled red onions brightens the deeply savory meat, which is so tender you could spread it on bread. 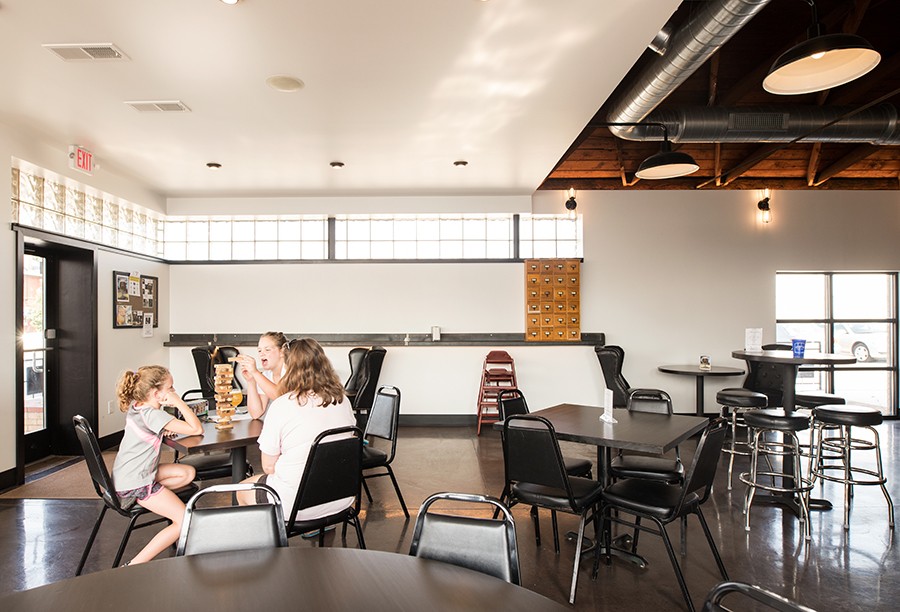 MABEL SUEN
Alpha Brewing Company offers plenty of seating, including an outside patio.

The excellence of that dish made me think again about the skeptical patron who was so dazzled by Estrella's ropa vieja that she simply refused to believe a St. Louis native got it right. Nor could she believe that any place outside her native Colombia could provide such authenticity.

But with Estrella dedicating so much of herself to the cuisine she both loves and respects, it seems impossible she could get it wrong. In fact, when she visits Caribbean restaurants on her various travels, she's now the one asking questions. She's not often impressed, but when she is, she can't help but be the skeptical one, asking the owners one very important question: OK, who really is cooking this food? 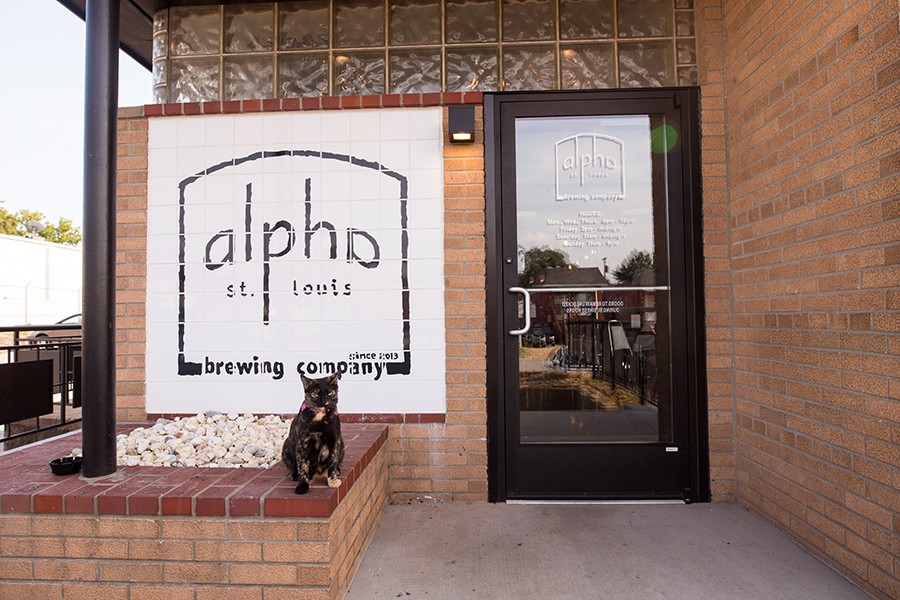