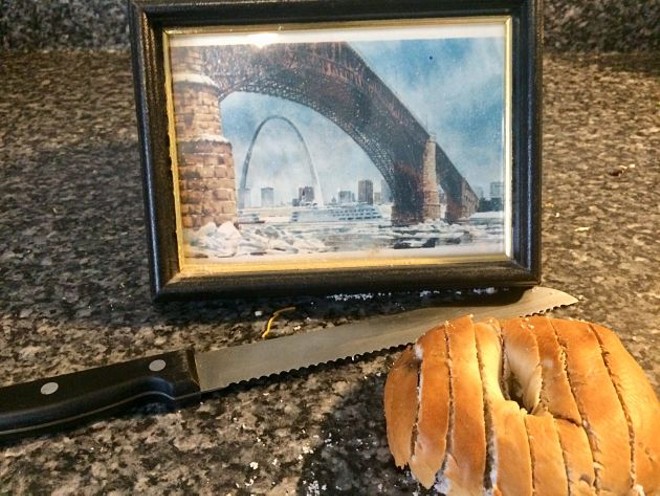 Yesterday, the whole of the internet took turns taking shots at St. Louis for our alleged habit of slicing our bagels like loaves of bread. The pile-on was great, and though I've never even seen this so-called local phenomenon in all of my 35 years as a St. Louisan, I will still fight to the death any snobby gatekeeping bagel weirdo who dares look down their nose at my city. (We are the only ones who are allowed to make fun of us, thank you very much.)

It's simple: If I want to chop my bagel into lines and snort that shit, I will do it. Similarly, if I want to flatten my pizza dough into cardboard and melt plastic bags all over it, I'll damn well do it. They say you are what you eat; incidentally, I just so happen to be garbage.

But none of you hypocritical sonsabitches are any better. I've been to your towns; I've eaten the gross nonsense you call food. And let's face it: Pretty much all regional specialties in the U.S. are stupid. If they weren't, they wouldn't just be regional. For fuck's sake, New York, you even call your gross thing a "garbage plate." Don't hurt yourselves piling all that chopped-up hot dog and hamburger meat into your macaroni salad while seated atop your high horse!

California, you allowed Gwyneth Paltrow to unleash a pseudo-food called "goop" on your populace. The only thing dumber than that shit is Gwyneth Paltrow herself. Have several seats.

And it's not just the elitists on the coasts. Cincinnati, that slop Skyline serves up is called "chili mac." It's not special, and if you love it so much you should check out the work of the renowned culinary genius Chef Boyardee. Oklahoma, Montana, you guys can call 'em "lamb fries" and "rocky mountain oysters" all you want, but you're still eating balls. You can eat my balls.

I didn't come here to defend our local food quirks per se, though frankly I'd gladly die on a hill of t-ravs and gooey butter cake (literally and figuratively). But I'll certainly defend our food scene, which is the toast of the entire U.S. James Beard awards? We've got 'em, for both our chef-driven standouts and our hot salami shops. You can get great steak and bearnaise here, top-notch vegetable-forward cuisine, and even crickets and bull penis, if that's your jam.

And as for the St. Paul sandwiches, the Provel "cheese," the slingers: They may be garbage, but they're our garbage, and we love them. Put plainly, people in "garbage plate" houses shouldn't cast stones.

And now, in honor of our closely guarded bagel secret that no one in St. Louis outside of a Panera Bread Bread Co. has even heard of finally getting out, I'd like to share my even secret-er "St. Louis style" bagel recipe, which you can see below. Eat your hearts out, you dorks.

Daniel Hill is editor at large for the Riverfront Times and he demands to be taken seriously, despite all evidence to the contrary. Follow him on Twitter at @rftmusic.
Read More about Daniel Hill
Scroll to read more Food & Drink News articles (1)