We can only hope they'll continue slicing their bagels like bread 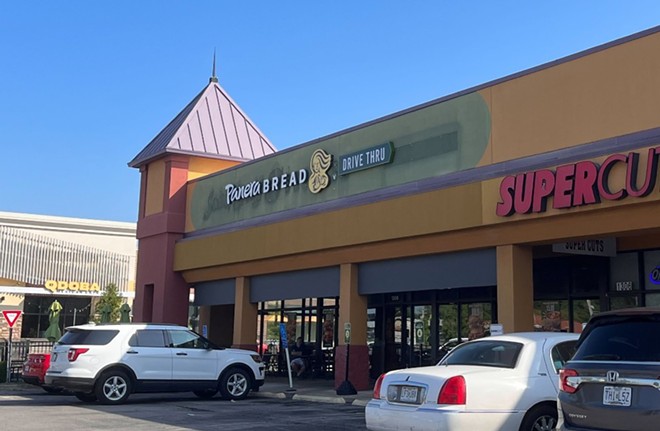 Update: So, we jumped the gun on that goodbye.

A spokesperson for St. Louis Bre — I mean, Panera — responded to our request for comment Wednesday afternoon and clarified that all bakery-cafes in St. Louis city and county will keep their St. Louis Bread Co. name — but, some locations in the metro area are now switching to Panera.

“We are so proud of our hometown, where we started more than 30 years ago, and we remain committed to serving the STL community — all bakery-cafes currently in St. Louis city and St. Louis County are proudly remaining as St. Louis Bread Co. locations,” Jess Hesselschwerdt wrote in an email to the RFT. “ As other bakery-cafes in the surrounding area undergo standard remodeling, some will take on the Panera Bread name.”

Hesselschwerdt adds, "And don't worry — we will still be bread-slicing those bagels."

An employee of the fast-casual dining chain tells the RFT that Panera Bread, a St. Louis-founded institution, plans to switch the names of some remaining St. Louis Bread Company cafes to Panera, in a stunning act of betrayal. Have they forgotten that St. Louisans' middling taste is what propelled them to the national status Panera maintains today?

A spokesman says only locations outside St. Louis city and county will be affected, with the rollout taking place as they undergo "standard remodeling." That includes, apparently, a storefront in O'Fallon, Missouri, which is now sporting the Bread Co. logo.

The name switch is apparently a cost-saving measure, according to our source. Producing paper products with two different brand names is just too expensive.

We get it. Times are tough. However, we can't ignore how the name switch will gouge a hole in St. Louis culture much like that of a hollowed bread bowl.

What's next? Will Nelly suddenly announce he's not actually from St. Louis? Will Imo's cut its pizza in concentric circles? Will the Arch sink into the Mississippi River?

For most long-time St. Louisans, Panera will always be St. Louis Bread Company or "Bread Co." We can only hope Panera will keep what remains of its St. Louis roots and continue slicing their bagels like bread.

Editor's note:  We corrected this story after publication to reflect the fact that Bread Co. locations in St. Louis city and St. Louis County will be keeping their St. Louis-centric name. We regret the error.