Next week, St. Louis diners can dig in while helping out during Tempus’ Friends of James Beard Benefit Dinner.

Most proceeds from the two-day event will go toward the James Beard Foundation’s Open for Good initiatives, helping independent restaurants rebuild and thrive in the wake of the coronavirus pandemic and creating pathways in the industry for individuals from underrepresented groups. 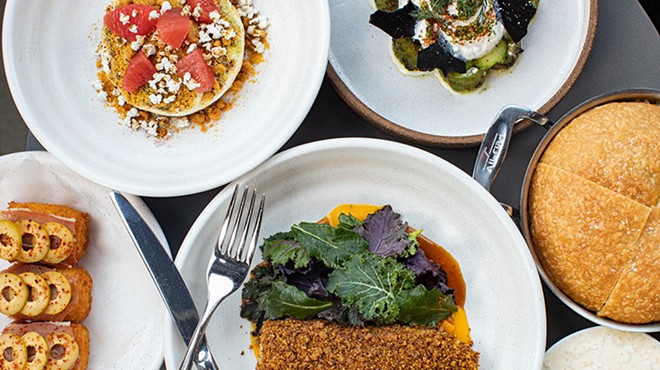 
The Tempus event will be the first time that St. Louis has hosted a James Beard Benefit Dinner. It’s an honor for Chef Ben Grupe’s restaurant, which first opened its doors in November 2021. Previously, Grupe was a semifinalist for a 2022 James Beard Award for Emerging Chef.

“To have the opportunity to do the first one in St. Louis is pretty exciting for us,” says Drew Lucido, Tempus general manager and beverage director.
click to enlarge

RJ HARTBECK
The evening will begin with a cocktail reception and passed appetizers followed by a unique five-course plated dinner.


He thinks its Tempus' attention to quality ingredients that led to the recognition. “The resurgence of caring about your ingredients and caring about where they come from and buying from local farmers and using fresh ingredients and using seasonal things — we've always been a great place for that, and we’ve slowly come to get that recognition,” he adds. “I think it's really great that St. Louis has finally been recognized as being the great food city that it is.”

The evening will begin with a cocktail reception and passed appetizers followed by a unique five-course plated dinner. Each dish will be accompanied either by a wine pairing or a custom cocktail.

After the James Beard Foundation reached out, the Tempus group — Grupe, Lucido, Sous Chef Justin Bell, Sonder Hospitality’s Andrew Viragh, and others — put their heads together to decide how the menu should unfold, literally charting it out on a large whiteboard.


They wanted to incorporate flavors and ingredients not normally found on Tempus’ menu, though all the dishes incorporate the reverence for quality ingredients that the restaurant has become known for. As an example, Lucido points to a beef dish that uses morels and green garlic, which have just come into season.

The event will also have interesting pairings, such as a low intervention, biodynamic Marion Cinsault wine from California that Lucido says he bought out the entire stock of. He also mentions a whiskey cocktail with a “beautiful smoke” flavor balanced with a sherry, rhubarb amaro and celery bitters as well as a gin cocktail featuring, among other things, a crema Earl Grey infusion.

Though Lucido is excited to show off the menu, he’s especially glad to be doing so while benefiting the larger industry. He says the effort closely aligns with what they’re all trying to do at Tempus in creating opportunities for people to enter the industry.  Tempus supports employees without steady transportation and also offers paid sick leave, free coronavirus testing and paid quarantine time.

All that — and good eats.