Everyone Makes Mistakes; How Your Customers Wish You'd Handle Them 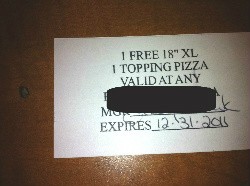 Chrissy Wilmes
The infamous rock (left) next to the coupon we were given for our troubles. Too little, too late.

This weekend when crunching into a bite of salad, Gut Check's vigorous chewing came to an abrupt halt as our molars painfully snapped against something hard as a rock.

After messily, impolitely, disgustingly fishing the offending object out of our half-chewed bite (sorry, dude we were eating with), we discovered the culprit was in fact, a small, jagged rock.

We politely informed the manager of what had happened, and she, after glancing at the teeny tiny misplaced boulder, plainly told us that we'd lost a filling.

No, we had not lost a fucking filling. If we'd lost a filling, we wouldn't be politely bringing an issue to your attention; we'd likely be clutching our jaw and wailing. And it wouldn't be your problem. There was no dental damage done here, though, there easily could have been. Did we mention we chomped into a fucking rock?

No, we wouldn't like a free appetizer or a new salad. What we'd like, ideally, is to not be fed rocks. But in the event that you feed us one, we'd prefer to not be talked to as though we don't know our ass from a hole in the ground, or our dental work from a rock that should be in the ground but is now in our dinner, as it was in this case.

This was the latest in a series of poor dining experiences that we've had in recent weeks. We've joked about it, we've been astonished by it, and we've referred to it as "bad dining luck." There have been unreasonably long waits, poor service, cold food, wrong food -- but the frustrating thing is not the mistake (we all make them!), but poor handling of those mistakes.

In the unfortunate situation where one of your customers bites into an object that isn't food when consuming a dish at your restaurant, do not insult them by implying they're wrong. Yes, it's possible that they're some chump trying to pull one over, and it's unfortunate when people get away with such things, but if they are being honest, you're setting yourself up to not only lose that customer, but also to really, really piss them off -- and pissed off customers like to Yelp. Do ask if they're alright, and do insist upon refunding them for the dish. It's frustrating to pay for something you didn't eat, and worse to pay for something you ate a few bites of and were traumatized by. Furthermore, do insist that you will look into the matter and ensure that it won't happen again, rather than, for example, telling us that once you found a screw in some chicken that you were preparing. At that same restaurant. Seriously? That's not helping.

While we're at it: If we've ordered over an hour ago and our food still isn't here, don't avoid passing our table or making eye contact with us. Stop by and let us know you're looking into the problem. When you bring us our food, explain what happened: our order was lost, someone stayed home sick and you're shorthanded, whatever. We know that some customers are unkind and will take this opportunity to be rude and scream at you, but give us the benefit of the doubt. We're not all like that. If you let us know what's going on, we really appreciate it. And that matters not only in how we feel about our overall experience at the restaurant, but also how much we tip.

In short, please don't assume that your customers are assholes. Some of them are, certainly -- anyone who's worked in the service industry knows that all too well. While the customers who've worked in the industry are a kinder, gentler, more empathetic breed, their tolerance has limits.

Epilogue: Fifteen minutes or so after our awkward confrontation with the restaurant's manager, she re-emerged from the kitchen, where she appeared to have been hiding, and sheepishly placed a card redeemable for a free pizza down on our table. She then mumbled a quick "sorry," followed by "I don't understand how that happened. We just dump all of that stuff out of a bag."

Yeesh. Of course, who are we to refuse a free pizza?