J. Gilbert's hooks our taste buds and our nostrils 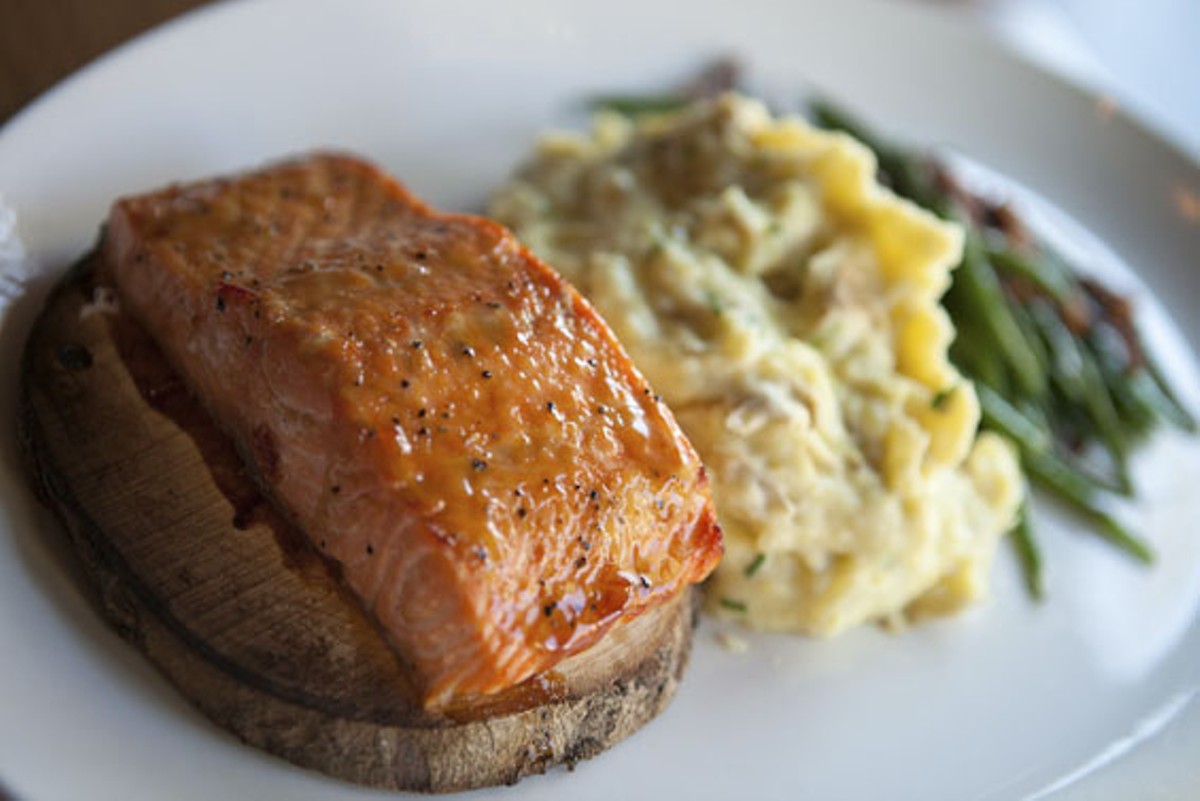 J. Gilbert's hooks our taste buds and our nostrils

Count J. Gilbert's Wood-Fired Steaks & Seafood among the growing number of restaurants to claim the phrase "wood-fired" as some kind of badge of rustic authenticity. Wood-fired grills. Wood-fired pizzas. At this point, a wood-fired sushi joint wouldn't shock me. (Come to think of it, the typical California roll might benefit from the grill.) At J. Gilbert's, however, the phrase is ridiculous because it is unnecessarily redundant for anyone with a pair of nostrils. As soon as you enter the restaurant, the aroma of mesquite smoke envelops you, and it will linger on your clothes long after you've gone home.

J. Gilbert's opened late last year at West County Center in Des Peres. The entrance is outside the mall itself, and with McCormick & Schmick's Seafood & Steaks next door and Bravo! Cucina Italiana nearby, it forms a sort of food court of upscale chains. In the case of J. Gilbert's, the chain is very small, with only five locations nationwide. The restaurant's namesake is Joe Gilbert, who cofounded the firm that, through the years and multiple owners, would also develop Houlihan's and Bristol Seafood Grill.

The interior does have the high-end design touches that you would expect from a contemporary steak house where you can drop $30, $40 or even $50 on your entrée: dark wood paneling along the walls; cushy, wraparound booths; a dramatic gas-fed fireplace across the dining room's back wall. But the vibe is welcoming, rather than painfully urbane or stodgy. The hostess greets walk-in diners dressed down and laden with shopping bags as warmly as those with reservations. The sound system plays tastefully curated indie rock at an unobtrusive volume. (Arcade Fire? Check. Fleet Foxes? You bet.)

J. Gilbert's serves USDA Prime steaks, which have been wet-aged from 21 to 35 days depending on the cut. The obligatory complaint of the discerning carnivore: If you offer USDA Prime steaks, you should dry-age them for maximum flavor. That said, on their own merits, the steaks at J. Gilbert's are very good. The grill burns hot enough to give them a medium-thick and flavorful crust, and the mesquite smoke accents, but doesn't overwhelm, the beef's natural flavor.

Cuts range from a humble top sirloin ($26) to a Flintstonian 24-ounce porterhouse ($54). My go-to steaks are strip (here available as a twelve- or sixteen-ounce cut) and rib eye (sixteen ounces, bone-in), and neither disappointed. Grilled a perfect medium-rare, each was luscious with rendered fat, the flavor still bearing a bright iron tang. In a welcome variation from the typical steak-house practice, the cost of your steak also includes two sides. There are the expected potato options (baked, roasted, mashed, au gratin), but the green vegetables steal the show: green beans tossed with caramelized onions and pecans and, especially, bracingly bitter broccolini topped with crisp, pungent chips of fried garlic.

The seafood selection includes such slam-dunk splurges as a lobster tail with drawn butter or an iced shellfish platter ($90 for enough raw oysters, shrimp cocktail, crab legs and shrimp claws to feed at least four). But there are more subtle — not to mention less expensive — pleasures to be had. An order of the "Maryland Crab Bisque" brings a shallow bowl empty but for a mound of lump crab meat. The server pours the creamy bisque over this tableside. The bisque itself has a strong crab note, so the result is an especially flavorful, yet strikingly simple, dish. Crab cakes (either as an entreé, with mashed potatoes and grilled asparagus, or as an appetizer, which you can sauce to taste with a remoulade, a mustard aioli and a tropical-fruit salsa) follow the same less-is-more principle, the lump meat lightly bound and then briefly broiled to deepen its natural sweetness. An off-the-menu striped bass entreé available during one of my visits was especially impressive: a slab of pan-seared fish served over a potato hash in a creamy sweet-corn broth shot through with chipotle, a burst of summer's essence.

With a few tweaks, J. Gilbert's could be that rare restaurant animal: an exceptional chain. Take the rack of lamb. The three double-cut chops are grilled until the exterior is deeply browned; a bite through this yields a touch of molten rendered fat and then tender, rosy meat. (I'd really sit up and take notice if the lamb were domestic rather than the ubiquitous and muttony New Zealand variety.) But the rosemary demi-glace fails to distinguish itself, and the side of bland mushroom risotto is, well, bland. And why, oh why do so many kitchens employ the "One From Column C" (TM) side-dish approach? (Broccolini with garlic! Again!) Starters would benefit from an imagination infusion, as well. Not that I've got anything against fried calamari or, for that matter, onion rings. But heck, I've got nothing against USA Today, and I don't read it. The kitchen gamely tries to liven up that old warhorse, tuna tartare, tossing ahi chunks with avocado, mango and pineapple and dotting the mélange with cilantro oil and Sriracha chile sauce. But it's still tuna tartare.

The wine list doesn't offer any exceptional values, but more wines than usual are available by the glass; this being a steak house, of course, there are a few trophy reds like Opus One and Caymus. Service is excellent. Servers definitely have a spiel about their recommended dishes, but they sell it with conviction. Certainly, when one server told us how much he loved the steaks here and then noted almost as a point of pride how he goes home every night still smelling of mesquite smoke, we believed him. 