A line waits outside of Menya Rui at 4:45 p.m. on a recent Friday evening, 15 minutes before the restaurant opens for its regular dinner service. Inside, owner Steven Pursley and his team set up shop, prepping the dining room and kitchen and awaiting the onslaught of diners that are

The final minutes pass by, and at 5 p.m., Menya Rui opens for business. A worker opens the door and directs people to available seats. Yet, the line outside doesn’t disappear and it is not long until the employee lets the next group in line know the restaurant is at capacity.

The scene is typical at Menya Rui, the much-anticipated Japanese restaurant that opened on April 21st in the former F&B's Eatery in the city's Lindenwood Park neighborhood. In some ways, the lines are intentional; the tiny dining area at Menya Rui consists of just two tables and two bar areas — 24 seats in total. According to Pursley, this small size is exactly what he was looking for when starting his restaurant. 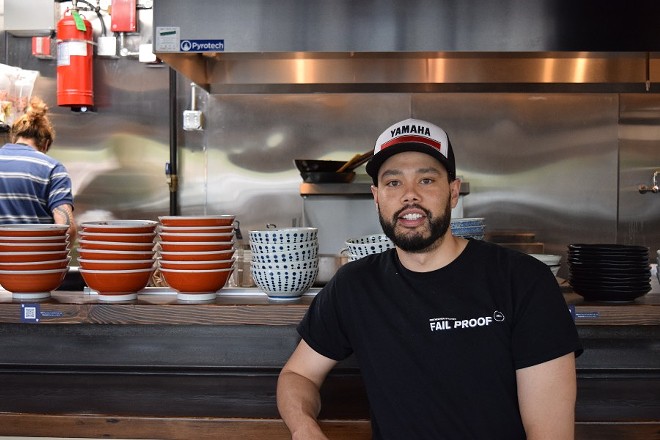 Cassidy Waigand
Steven Pursley is excited to share what he learned cooking in Japan with St. Louis diners.

“Most ramen shops in Japan are pretty cozy like that,” Pursley says. “For the most part, they're right in that like 20 [to] 30 seat range. And that's just a certain feeling you get when it's a cozy environment like that. So, I definitely wanted to bring that aesthetic and that vibe.”

Pursley has firsthand experience with the “aesthetic and vibe” of ramen shops in Japan. His mother is from Okinawa, Japan, and he and his family often visited the country of her birth when he was young. Those travels were foundational for Purely, and in 2013, after graduating from the University of Missouri–St. Louis with a degree in political science and unsure of his next steps, he began to explore the idea of opening a ramen shop. He spoke with an uncle in Japan about his plans and connected with the owner of his uncle's favorite ramen shop to do some research.

“Over the three years [I was in Japan], I worked in four different shops and learned everything from soup-making to the Tare, which is like the base seasoning; toppings, and even the noodle making,” Pursley says. “So yeah, [from] A to Z, [I] learned it all.” 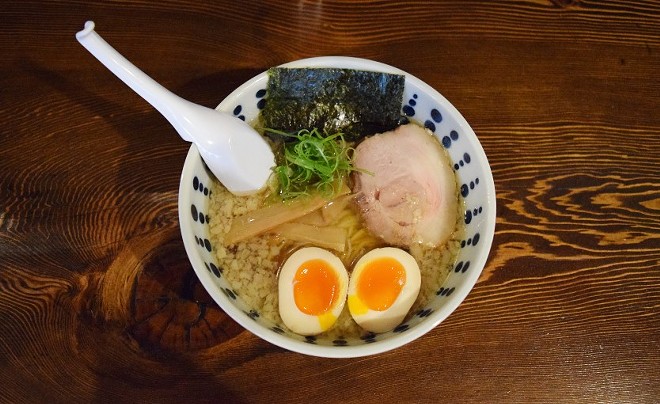 When Pursley returned to the U.S., he brought the knowledge and experience he had gained in Japan with him and began doing pop-ups under the name Ramen x Rui. His goal with the pop-up was threefold: to reacquaint himself with the St. Louis restaurant scene, to tinker with recipes and to save for a brick and mortar shop; as time passed, he began to serve more and more people, proving to him that a Japanese-style noodle shop could be successful in his hometown.

Menya Rui,  a combination of Pursley's Japanese name, Rui, and "menya," which translates to "noodle shop in Japanese, has built upon his pop-ups' success. As he explains, the idea was to capture a more encompassing notion of the types of noodle shops where he worked in Japan as opposed to focusing on the style more commonly known in St. Louis.

“I think calling myself a Menya versus a ramen shop encapsulates the other styles of noodles that I offer and kind of pushes the ramen culture forward in the States,” Pursley says. 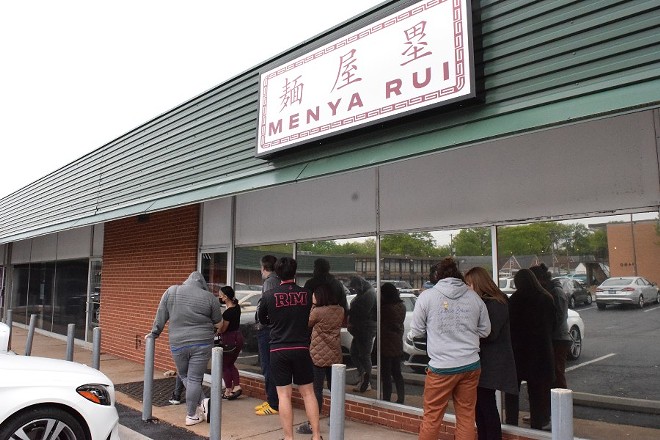 Cassidy Waigand
Guests queue up to get a taste of Menya Rui.

To that end, visitors can find ramen at Menya Rui; however, the restaurant also offers tsukemen and mazemen. According to Pursley, both are thicker noodles when compared to ramen. He also offers a variety of broths based on his experiences working in Japan. As he explains, the first shop he worked at used a shoyu broth, which is a soup seasoned with soy, as opposed to tonkotsu, a pork bone broth used primarily with ramen. Pursley recommends people try the pork shoyu ramen when visiting Menya Rui.

“As far as like the first shop I worked at, he had like a similar style," Pursley says. "That one was [where] I was like, ‘Oh man this shit is so fire.' "

For those looking to try a different noodle, Pursley recommends the tsukemen, which consists of thicker, cold rinsed noodles with pork shoulder, menma, scallion and nori on top. Menya Rui also offers a variety of appetizers, including housemade cucumbers and karaage, which is a style of Japanese fried chicken.

Cassidy Waigand
Japanese style fried chicken is one of the restaurant's non-noodle dishes.

“When you're competing in Tokyo, you have to use crazy ingredients and do something wild to stand out but here, there's not a million ramen shops,” Pursley says. “So I just needed to kind of the basic the basic staples, which I was able to get.”

Menya Rui is currently open Thursday through Sunday from 5 to 10 p.m. Looking toward the future, Pursley hopes to grow the number of staff at the restaurant to ensure it does not sell out so quickly. In the meantime, he's just happy that his concept is resonating with St. Louis diners — even if they wait looks deceptively intimidating.

"The people that come in, the vast majority, are really happy; they're stoked,” Pursley says. “I've had a line every day. So yeah, I'm grateful. It's pretty fucking awesome. But don't be afraid of the line. It moves fast."