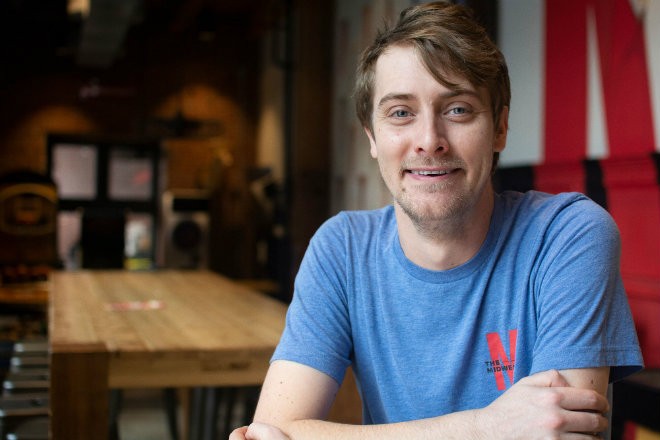 ANDY PAULISSEN
At the Midwestern, Nik Nagel is relishing his role as assistant pitmaster.


Eighteen years-old, unsure of college and sick of living in St. Louis county, Nik Nagel moved to the city and took a job working the register at Tei Too. It was a move that changed his life.


“I’d been working at Best Buy since I was sixteen and really wanted to move to the city and do something different,” Nagel says. “I was working front-of-house for Ann Bognar at Tei Too, but one day, she lost a cook and asked me if I wanted to learn how to work in the kitchen. I said yes and realized right away that I enjoyed doing it. From there, I just kept going.”


Looking back, it’s no surprise that Nagel found himself in a line of work that involves food. Now assistant pitmaster to Ben Welch at the Midwestern Meat & Drink (900 Spruce Street, 314-696-2573), Nagel grew up in a family filled with self-proclaimed chefs who loved to make everything from corn-studded mac ‘n’ cheese casseroles to homemade ice cream.


Still, Nagel had no plans to cook professionally. After graduating from high school, he enrolled in general classes at St. Louis Community College-Meramec while searching for a career path. His job at Tei Too provided him with a glimmer of the answer he was looking for, and as he moved on to his next job at SqWires Restaurant, he was pretty sure he had found his way.


At SqWires, Nagel met Nick Del Gaiso, who immediately became an industry mentor to him. The two clicked, and when Del Gaiso moved over to now-shuttered Scape American Bistro, Nagel went with him, a move that solidified his decision to pursue a cooking career.


“That’s where I got really into food,” Nagel explains. “At Scape, I got to work with Eric Kelly, who taught me not only about cooking but also about what it really meant to be a chef.”


Nagel had already been going to culinary school at St. Louis Community College-Forest Park since he was at SqWires, but working with Kelly at Scape made him realize that he preferred to pursue his education outside of the classroom. He left school and threw himself into learning everything he could under Kelly, growing in his roles and working his way up the line.


After Kelly and Del Gaiso left Scape, Nagel decided to do so as well, opting to join Del Gaiso at his new venture, the Wheelhouse in Clayton. That was six years ago, and ever since, Nagel has been Del Gaiso’s go-to person, helping him open the kitchens at his other ventures: Start Bar and a second location of the Wheelhouse, both located downtown.


It was natural, then, that Del Gaiso would ask Nagel to help out with the Midwestern Meat & Drink, which opened in March. Initially, he was slated to be the closing kitchen manager, but once he and chef Ben Welch got to working together, it became clear that Nagel was primed to be his right-hand man.


“Nick told me that he wanted me to be Ben’s sidekick, and it’s been great,” Nagel says. “He’s been teaching me so much. Smoking meat is completely new to me, so this nine-month adventure has been a pretty cool one.”


Nagel is thriving in his role as Welch’s assistant pitmaster, a role that forced him to learn quicker than he could have imagined. “You learn within the first couple of weeks because you have to,” Nagel laughs, citing the precision involved in barbecue.


He’s also relishing his first chance to get close to whole-animal cooking, including the restaurant’s famous pig’s head, which he admits gave him a bit of a shock the first time he worked with it. However, it’s moments like that that makes him realize he’s exactly where he wants to be.


“Whether it’s every other week, weekly or every day, I am picking up something new,” Nagel says. “That’s what makes this fun — the fact that I am able to keep learning. It’s been a pretty cool adventure to this point.”


Nagel recently took a break from smoking the Midwestern’s amazing beef ribs to share his thoughts on the St. Louis food and beverage scene, his love of jazz and gaming and why you’ll never see him noshing on plant-based bacon.


What is one thing people don’t know about you that you wish they did?


What daily ritual is non-negotiable for you?

Anything to do with my dog. He's my very best friend.


If you could have any superpower, what would it be?

I'm going Doctor Strange with it — let me control time.


What is the most positive thing in food, wine or cocktails that you’ve noticed in St. Louis over the past year?

Chef Nick Bognar. I love seeing him succeeding. I started my culinary career working for his mother, Ann.


What is something missing in the local food, wine or cocktail scene that you’d like to see?

I know there are jazz bars, but more of them — with delicious small plates and cocktails. I love jazz, and I love a good cocktail with some snacks.


Who is your St. Louis food crush?

Probably Rick Lewis. I could eat his fried chicken every day.


Who’s the one person to watch right now in the St. Louis dining scene?

I’ll be cliché and say my chef, Ben [Welch]. He's a pretty inspiring guy, and I’ve learned quite a bit in our nine-month adventure.


Which ingredient is most representative of your personality?


If you weren’t working in the restaurant business, what would you be doing?

IT. I’m a gamer. I’ve been gaming my whole life, so being on a computer is second nature to me.


Name an ingredient never allowed in your restaurant.


What is your after-work hangout?

My house, with my dog, on the internet with my gaming buddies.

Gin and tonic, specifically Hendrik's with a dash of Fever Tree [tonic] and a lime.


What would be your last meal on Earth?