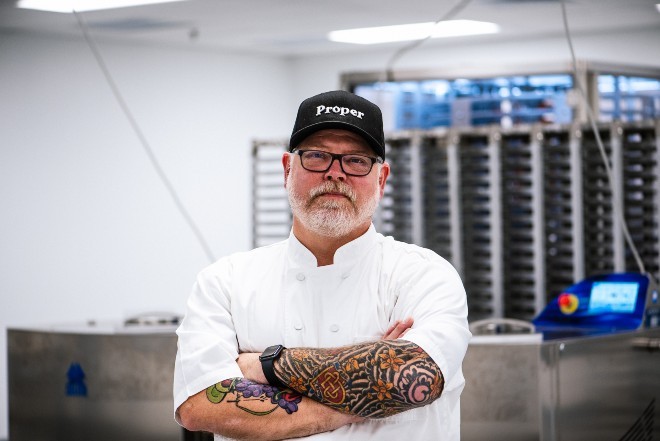 When Proper Cannabis opens its facilities, tentatively by April 20, it will be one of many companies hoping to capitalize on Missouri's new medical marijuana laws. However, the brand is angling to differentiate itself from the pack with its appeal to a discerning clientele — and its edibles line, Honeybee Edibles, is bringing in the culinary big guns to ensure it does just that.

Longtime St. Louis chef Dave Owens has been tapped as Honeybee's Director of Culinary, a position which puts him in charge of the development and manufacture of the company's entire edibles and RATIO mints lines. It's a major task, but one Owens is up to, given his extensive resume in the field: Prior to joining the Proper Cannabis team, Owens served as the chief chocolatier for Bissinger's for twelve years, helping to guide the storied confectionary as it expanded its offerings. As he sees it, he will be doing the same at Honeybee, just incorporating THC in the process.

"They invested serious money in the kitchen and equipment, and I am sourcing the finest ingredients I can source," Owens says. "I'm sourcing chocolate from Europe and fruit purees and nuts from all over the world to produce a fine quality confection that just happens to have cannabis in it. This way, someone who is a medical patient can get something high quality that tastes great and has the medicine in it they need."

As Owens explains, Honeybee is different from most other edibles manufacturers on, or coming to, the market in just how much emphasis they place on quality. Because of the skill and expense involved, most brands do not temper chocolate, but instead use a compound coating process that employs a cheap, low-quality chocolate alternative. This means that they can sell their wares without having to invest in the ingredients and skilled labor it takes to make something more artisanal.

Proper chose to go in a different direction in the hopes of appealing to customers looking for a higher-quality, gourmet product. Billing itself as a chef-driven culinary brand, Honeybee will offer fine European chocolate bars featuring flavors like blood orange and candied hazelnut dark chocolate, as well as gumdrops made with real fruit purees, such as sour raspberry lemonade. In addition, Owens is developing the brand's RATIO line of compressed mints.

Owens' is drawing upon an impressive resume to realize Honeybee's goal of being a high-quality, chef-driven product. After graduating from culinary school, the chef worked for the Sheraton at Westport and Cardwell's, both in Clayton and at Plaza Frontenac, before opening the innovative Terrine in the Central West End. In all of these roles, he developed his knowledge of both the savory and pastry sides of the kitchen, which he brought with him to Bissinger's. His experiences provided a general understanding of confectionary, but transitioning from small-scale restaurant production to large-scale manufacturing was eye-opening. For twelve years, he worked hard to balance the two sides of the business — quality and mass-production — something he's excited to bring to Honeybee.

"At the end of the day, chocolates and confections make people happy," Owens says. "Certainly, someone is happy when they have a great bowl of French onion soup, but if you give someone a piece of chocolate or a gum drop, those things really produce a different emotion. I really think that chocolate creates emotions and affects the brain differently than savory food does."

Though Proper does not have an exact opening date for its two retail locations in Warrenton and South St. Louis County, Owens hopes to have Honeybee's products available by 4/20, a date revered by cannabis aficionados. In addition to the two dispensaries, Honeybee will also distribute its confections wholesale to retail dispensaries across the state. It's an ambitious vision — and one that Owens is happy to be a part of.

"It's an interesting place to be at the crossroads of fine confections, the culinary world and cannabis," Owens says. "There's a lot to think about, and it sometimes keeps me awake at night, but it's like opening a new restaurant. It's exciting and there's going to be a little bit of hand-wringing, but I'm building a great team of people who are really looking to get great products to medical patients. I wouldn't have come on board if I didn't feel they had such a commitment to quality. This is really a group of great people."