Review: Ramen Tei Shows How Great Real Ramen Can Be 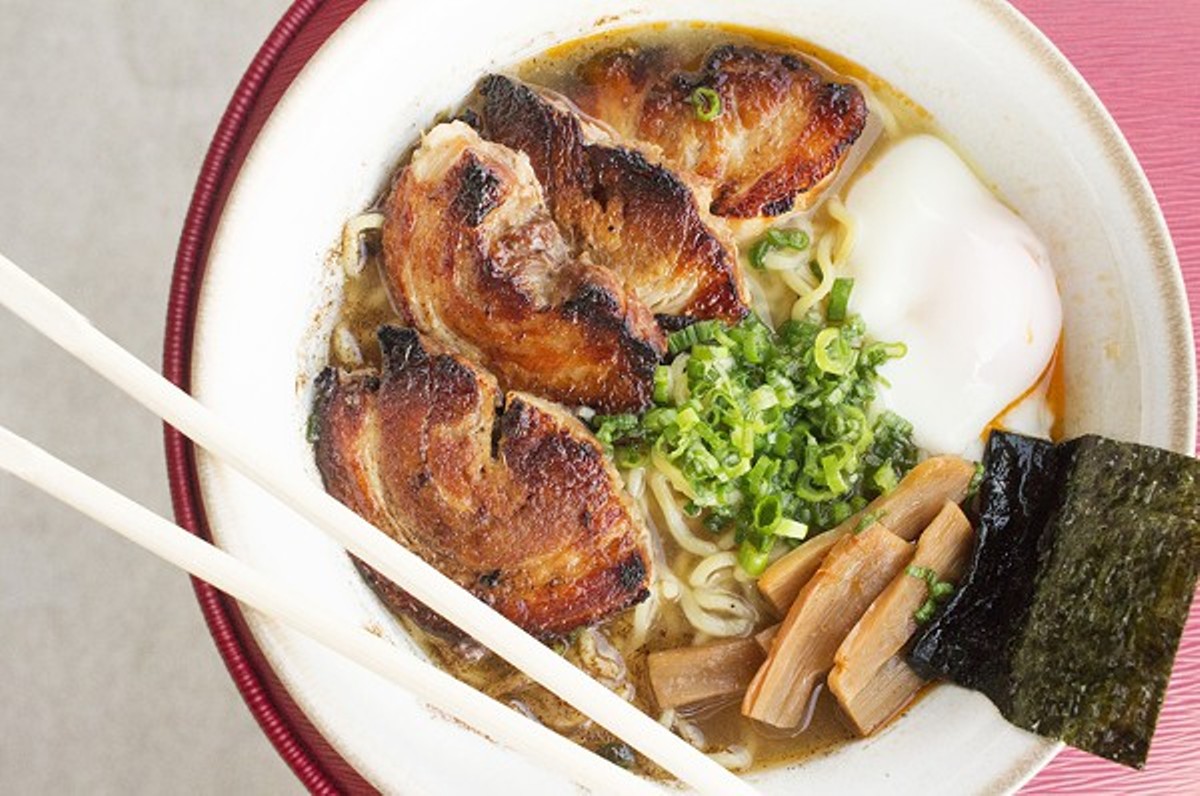 The tonkatsu ramen at Ramen Tei Photo by Mabel Suen

I'll admit it — I didn't really get ramen until I ate at Ramen Tei. It's not that I didn't like it. I just failed to see why trendy food publications cluttered my Facebook feed with multiple posts a day on glorified chicken-noodle soup. Coupled with the buzz that's been building over the ramen restaurants being developed by a few prominent St. Louis chefs, it was hard not be exhausted by the year's biggest food trend.

And then my server at Ramen Tei presented me with a large ceramic bowl filled with tonkatsu ramen. It was damp and chilly outside — 5 p.m., but already dark. Yet something about the bowl of steaming hot noodles was supremely soothing. Handmade curlicues of noodles filled the dish, and a sous-vide egg bobbed in rich 24-hour pork broth next to pieces of nori, exotic mushrooms and succulent char sui pork belly. This wasn't noodle soup merely glorified; it was beatified. 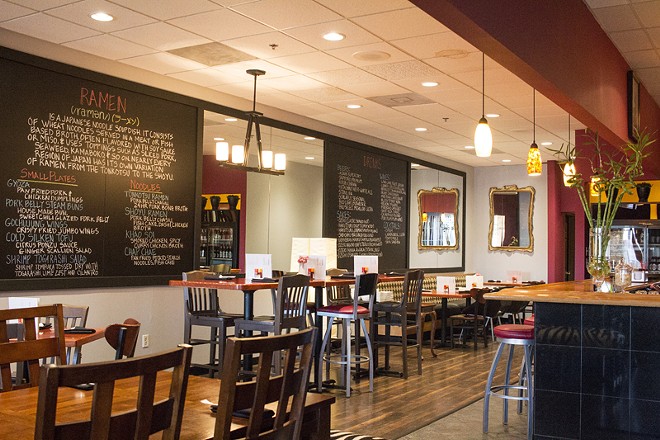 Ramen Tei serves its steaming bowls of comfort out of a nondescript west county strip mall a few doors down from a Hot Shots. Once you walk inside, the image of that Bud Light-fueled pool hall is replaced by a cozy, inviting atmosphere. Modern artwork hangs from deep cranberry-colored walls, and dim lights and candles cast an amber glow throughout the room. A communal high-top table and several half-banquettes provide seating, as do the black stools around the small bar.

The space used to be the lounge area for Ramen Tei's sister spot, the sushi/Japanese fusion restaurant Nippon Tei. About a year ago, chef Nick Bognar approached his mom, Nippon Tei's owner Rachel Bognar, with the idea to convert the space into a ramen shop instead.

Up until a few years ago, most of us stateside thought of ramen as little more than the freeze-dried, sodium-laden packets made popular by poor college students. But real ramen — the way they serve it in Japan, and the way it's become wildly popular in LA and other West Coast cities — relies not just on handmade noodles, but also intensely flavored broths. They might be infused with pork, chicken, miso or soy — and they're nothing like the boiling water you added to Top Ramen as an undergrad. 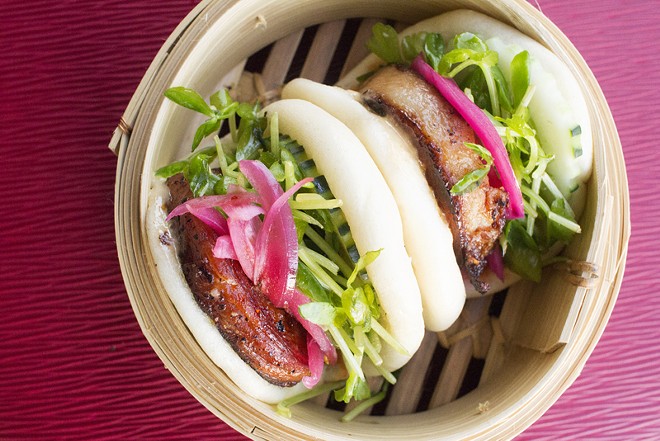 To his credit, Bognar perfected his own traditional ramen techniques before opening Ramen Tei in August. The menu is small, consisting of four noodle dishes including the tonkatsu, as well as a handful of starters.

Among the noodle options, the other traditional Japanese offering is the shoyu ramen, a delicate, chicken-based broth that has been deepened by shoyu tare, or seasoned and reduced soy sauce. As in the tonkatsu, noodles, pork belly char sui, nori and a sous-vide egg are added to the liquid. Fermented bamboo shoots called menma give a pungent kick, and the combination of shiitakes and the optional smoked chicken permeated the dish with earthiness.

Bognar riffs on the northern Thai specialty khao soi by replacing that dish's traditional rice noodles with Japanese ramen. I prefer the delicacy of the rice version, but this is a minor point considering how good the aromatic curry broth is. Lightly spicy and enriched with coconut milk, it serves as the base for smoked chicken and an array of accouterments from pickled greens to pulverized fried garlic. The flavors are as marvelously true as anything served at the city's top-tier Thai restaurants. 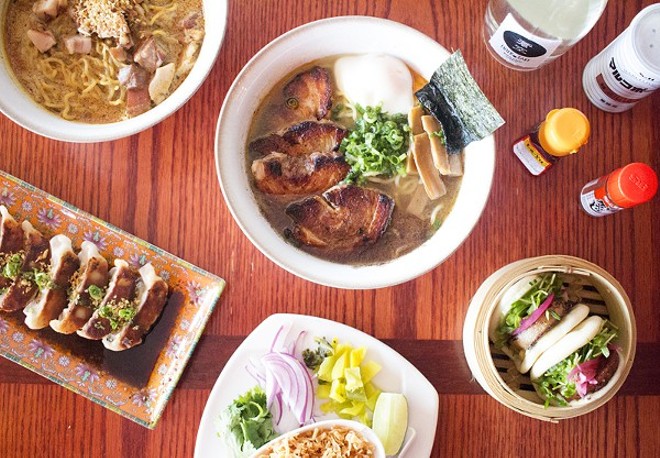 The chef equally proves his Korean chops with the chap chae. Sweet and spicy sesame oil clings to glassy sweet potato noodles and mixed vegetables. Bognar tops the dish with three subtly sweet fish cakes — a traditional Korean delicacy that tastes like a seafood version of a French toast stick. It is odd-sounding indeed, but that complex blend of sweet and savory is magical.

Ramen Tei's small plates are reason enough for a visit, even without the noodles. Chicken and pork gyoza are pan-fried so perfectly the edges develop a crisp, caramelized halo. The dumplings are liberally drizzled with a vinegary soy reduction; I would have considered the chef heavy-handed were the sauce not so addictively mouth-puckering. Pork steam buns were revelatory. The pork belly filling was so succulent it was almost spreadable — more like pork butter than pieces of meat. I would normally refrain from ordering chicken wings at a ramen shop, but I was glad I tried them here. Ramen Tei's are plump, crispy and glazed with fiery gochujang, a Korean fermented chile and soybean paste. These sweet and piquant wonders were only eclipsed by the cold silken tofu – Ramen Tei's biggest surprise and possibly its best dish. A thick slice of tofu, pearlescent in color and the texture of baked custard, is the culinary equivalent of wrapping yourself in a luxurious silk robe. The tofu is lightly dressed with a ginger scallion salad and drizzled with citrus ponzu and soy gastrique. It's good enough to be the restaurant's signature dish.

Ramen Tei's lone dessert sounded like a throwaway. Our server described it some pan-fried naan filled with cream. What arrived was a decadent roulade of Indian flatbread filled with sweetened condensed milk and dusted with powdered sugar. The dough was reminiscent of a buttery crêpe — like a "not disgusting funnel cake," my friend suggested. It was a surprising end to an evening of pleasant surprises.

Ramen Tei is on-trend without feeling trendy — credit goes to the Bognar family for recognizing ramen's increased popularity, even while taking their time to get it right before jumping on the bandwagon. The Bognars' efforts have made me a believer.