by Matt Wynn of Salve Osteria 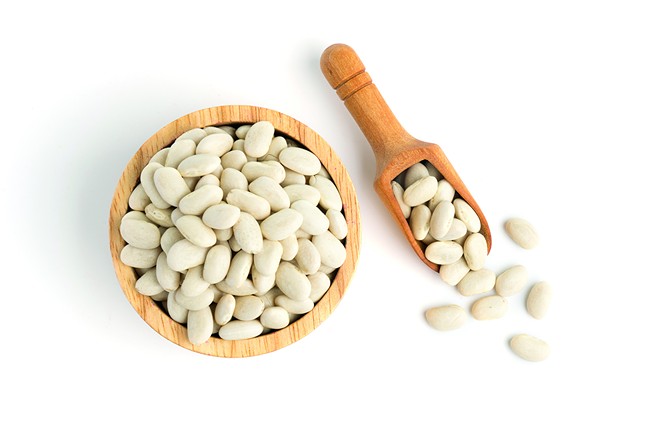 SHUTTERSTOCK
For a filling and warming soup, try this ham and bean soup recipe.

When the temperatures and hours of daylight diminish, there’s one recipe I cozy up to: Ham and Bean Soup. Not only is it comforting for me, but it’s a little salty and funky. It takes a bit of prep time, but it’s worth having the pot simmer on the stove for hours, perfuming the house with the aromas of sweet and salty ham combined with herbal notes of rosemary. The  fragrance alone is worth the time and effort.

Instructions:
Step one: soak the beans (separately)
Find large containers for each. For the pound of beans, I would soak them in a gallon of water. I usually leave mine out for several hours at room temperature, but if you do them for any longer, you’re going to want to leave them in the refrigerator overnight. They’re going to soak up all that water, which allows for a much shorter cooking time.

Step two: prepare the broth
Grab a large pot and fill it with water (probably about a gallon). Throw in the ham hocks, bay leaves, rosemary and any vegetable trimmings. Bring the broth to a boil, and then let it simmer for a few hours.

Step three: prepare the soup
In a large pot, add two tablespoons of olive oil, and warm it on medium heat. Add in the ham, and let it render for five to 10 minutes, until it starts to lighten in color and become fragrant.

Add in the onions, celery and carrots. Let them sweat down and become translucent.

Add in the tomato paste, Dijon, oregano and crushed red pepper. Cook for five minutes in the pot, stirring to avoid browning the ham. Strain the water from the beans, and add the soaked beans to the soup pot, stirring to coat them in the flavored oil.

Bring the mixture to a simmer, and let cook for two to three hours, stirring periodically. Keep a close eye on the beans, making sure they’re cooked and tender.

Step 4: garnish!
The soup is wonderful as is, so I keep the toppings nice and simple: a drizzle of olive oil, some cracked pepper and a little bit of Parmesan cheese. You can also add some thinly sliced scallions, some chili oil, if spice is preferred, or some crackers for more crunch and texture. This classic soup also pairs perfectly with some cornbread or a nice loaf of focaccia.