Review: Basil India Serves Some of the Best Dishes in St. Louis 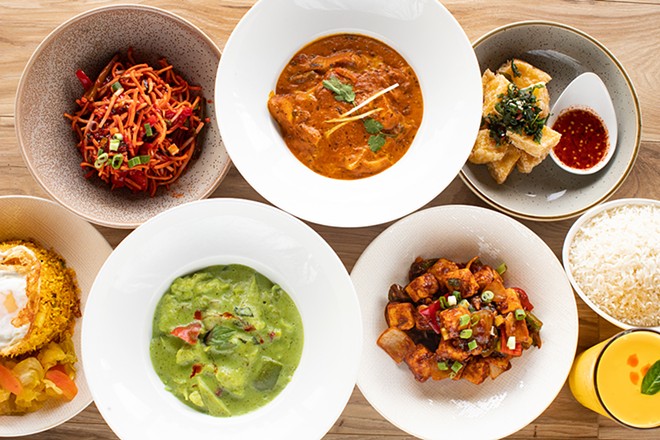 Madan Chhetri, one of the best chefs in St. Louis, has no PR team, no white tablecloths in his dining room and little name recognition. He toils in relative obscurity on South Grand, where he spends his days and nights preparing the curries, noodles and various other Indo-Chinese, Thai and Indian dishes featured at Basil India (3183 South Grand Boulevard, 314-428-9711).


His prowess is revealed the moment you dig into his crispy noodle salad. Vibrant red, like a candy-painted Ferrari, the dish looks as if it could be masochistically fiery, or as cloying as a Panda Express sweet-and-sour side. Instead, it's a stunning mélange of texture and flavor, balanced by crunch and softness, coolness and fire, tang and sweetness.

Crispy fried noodles form the base of the salad, tossed with slices of white onions and bell peppers in a tamarind-based chili sauce kissed with a whisper of cilantro. The heat is pronounced, but the tamarind's natural sweetness cancels it out, while the vegetables' coolness cleanses the palate. That all of this occurs in one bite is not just good cooking; it's wizardry. 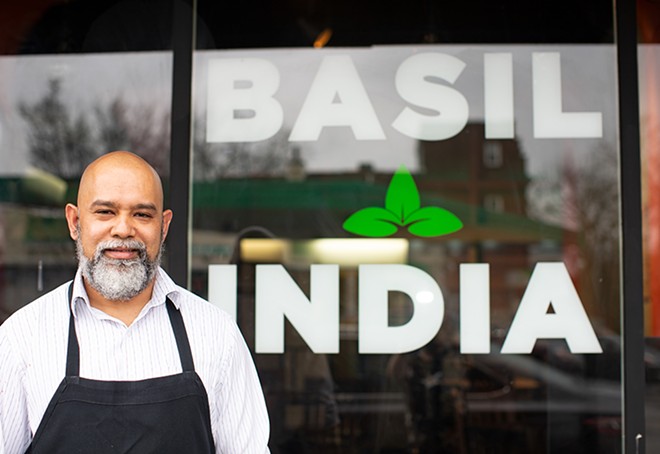 Basil India opened eight months ago in the heart of South Grand's internationally inflected dining district. One wouldn't suspect magic was happening here; located in the former home of Basil Spice, the subtle name change barely registers with passersby. In June, Basil Spice transferred its ownership to the team behind the Delmar Loop Indian restaurant, Turmeric. (Basil Spice's owner remains the building's landlord, but is not involved in the restaurant.)

The owners of Turmeric — Naveen Kumar, Ranjul Dayal — have bold ambitions for Indian cuisine in St. Louis. IT professionals by day, the two men opened their debut restaurant in 2019, hoping to buck the standard playbook of Indian food in the Midwest. With bold flavors and dishes not usually seen on St. Louis menus, the pair parlayed their success into their sophomore effort Turmeric Street Style, inside the Food Hall at City Foundry.

Kumar and Dayal enlisted three of their work colleagues to take over Basil Spice, and sought out a world-class chef. They found exactly that in Chhetri, who was then working at an innovative fine-dining Indian restaurant in Northern Virginia called Bombay Velvet, which was envisioned in the style of the groundbreaking D.C. restaurant, Raskia. Chhetri garnered a reputation as an innovator in Indian cuisine, and when Kumar and Dayal heard of his skills, they recruited him for Basil India. 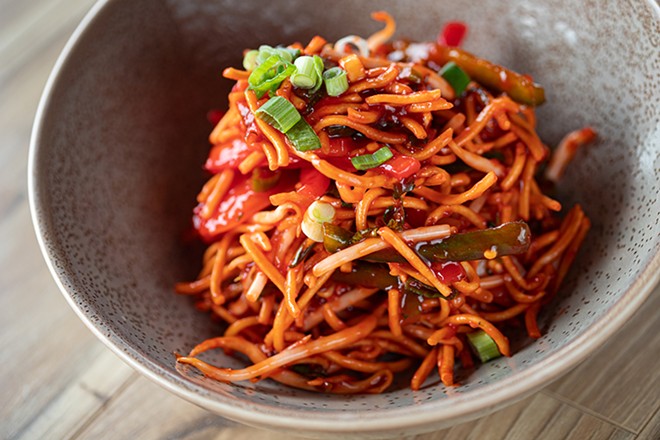 A native of southern India who grew up in a military family, Chhetri found himself with a choice when he came of age: follow in his father's footsteps into the army or enter culinary school. He chose the latter and cooked in Bangalore and Goa before landing in Mumbai. There, Chhetri worked for a restaurateur with fine-dining restaurants in both India and China. Chhetri traveled between the two countries, sharpening the skills he carried with him to northern Virginia, and then to St. Louis.

You wouldn't realize Basil India contains such culinary greatness, considering how it blends into the other international restaurants along South Grand. Inside, the restaurant is equally unassuming. A handful of wooden tables dot the sparsely appointed dining room; bright green and pale blue walls are accented with coral colored columns, and a couple of small yet vibrant tapestries hang alongside green vines on the wall separating the front of the house from the kitchen.

Then again, even the Taj Mahal would pale in comparison to the splendor Chhetri creates. If the crispy noodles are a case study in complementary flavors, temperatures and textures, the Tangra-style chili paneer is a master class in spice use. Named after a region in southern India, the appetizer lights up the palate like a fireworks display. It's searing hot, but the flavors are so complex — think the most perfume-y black peppercorns possible married with cinnamon — they somehow mitigate the heat's impact without taking away from it. Cubes of pan-fried white cheese, bell peppers and onions are slicked with the mouthwatering chili sauce. Without question, this is one of the best dishes being served in St. Louis. 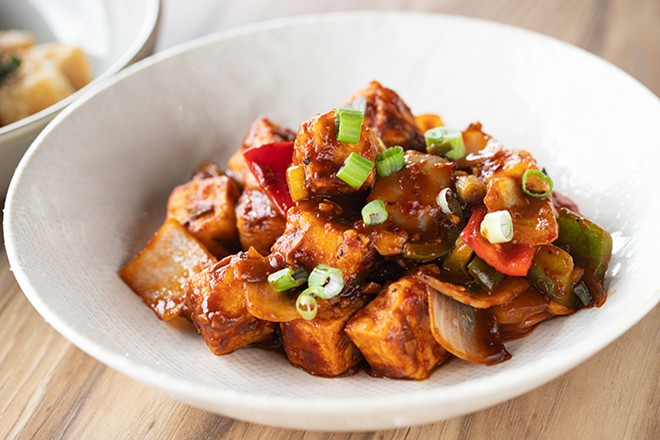 After such heat, the flash-fried corn-cake appetizer provides decadent relief. The small cubes look like tempura-battered tofu but are actually corn fritters; the crispy exterior yields to a sweet, custard-like creamed-corn interior. They are searing hot when they hit the table, but even when the first one burns your tongue, you can't resist going back for another.

Chhetri perfected his Bombay curry while living in the city of the same name. Hunks of tender chicken are slow-cooked in a luxurious greenish yellow curry that tastes like floral green peppercorns; the heat is pronounced yet doesn't take over the flavors. His yellow curry, on the other hand, is outrageously flavorful but completely mild. This dish, off the Thai portion of the menu, is as rich as bisque and tastes of coconut milk, turmeric and lemongrass. The result is a warm, soothing dish as comforting as Grandma's chicken soup.

Even a dish as ubiquitous as butter chicken is made extraordinary thanks to Chhetri's deft touch. The rich, tomato-based concoction is seasoned with fenugreek, infusing the sauce with a deep, maple-like flavor. Tender hunks of chicken bob in this delectable nectar. I found myself sopping up the last drops with slices of naan so flaky you could mistake them for phyllo dough. 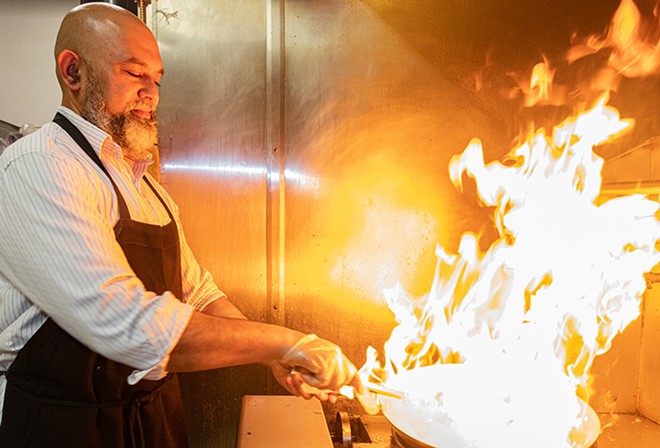 Mabel Suen
Madan Chhetri has been perfecting his craft, from India to China, for decades.

Nasi goreng, an Indonesian rice, tofu and shrimp dish, is deceptively hot. The fried rice, served in the form of a cone, is laden with red chilies. An over-medium egg is placed atop the cone; when you pierce the yolk, it drips into the rice, giving the dish richness. Pickled vegetables, served alongside the rice, provide both brightness and refreshment.


Coming off the spicy rice, the red snapper is like a soothing blanket for the tongue. The fish — beautifully seared to produce a crispy coating and leave tender flesh — is presented like a stew, resting atop a bowl of thick, butter-chili oyster sauce that tastes like a thickened, green-onion vegetable stock. That something can be so powerful and so subtle is testament to Chhetri's mastery of his craft.

Dishes similar to this can be found at any other Indian restaurant. Chhetri's version, however, like every dish that comes out of the chef's kitchen, makes you feel like you are experiencing it for the first time.