Review: Chicken Seven Has What It Takes to Succeed, If the City Would Let It 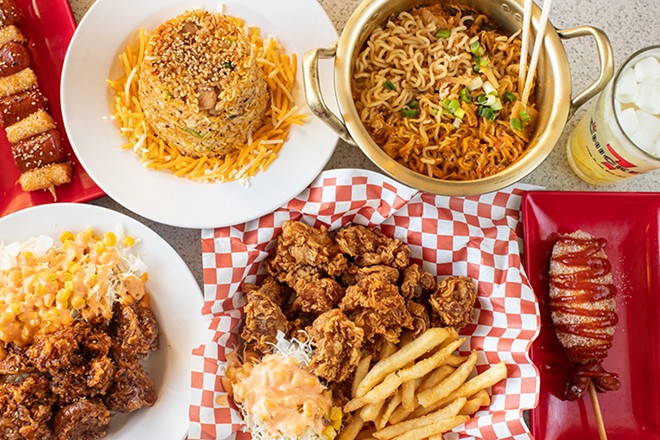 We should be talking about Chicken Seven's (6312 South Grand Boulevard, 314-354-6349) outstanding Korean fried chicken. About how the golden batter that encases a plump, searing-hot drumstick is as crunchy as a kettle-cooked potato chip, yet impossibly light, wrapping the juicy bird in a layer of savory flavor so crisp, you can hear someone bite into it halfway across the dining room.

We should be focused on the "Yum Yum" sauce, a housemade concoction that is what bottled sweet chili sauce aspires to be. The brown sugary nectar, laden with soy, garlic and medium-hot red chiles, gilds the fried chicken, giving it the glisten of amber-hued glass.


In an ideal world, we'd fixate on Chicken Seven's tteokbokki, a riff on the traditional Korean fish and rice cake dish that takes the standard gochujang sauce, amps it up with even more fiery chili heat, then garnishes it with shredded cheese and scallions so it's like a K-chili mac. Or maybe we'd go on and on about how a Korean corn dog, the offspring of a massive mozzarella stick and a cinnamon sugar doughnut, is such an outrageous mix of rich and sweet, it's difficult to wrap your brain around it. 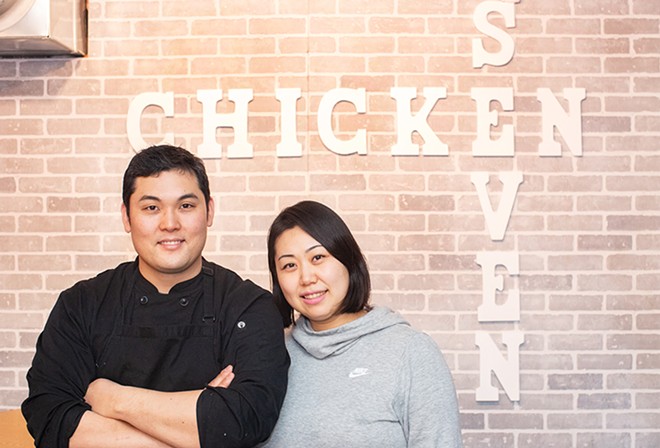 Instead, the thing we have to talk about when it comes to Chicken Seven is whether or not this glorious restaurant is going to be around, at least in its current form, for that much longer. Thanks to a Kafkaesque bureaucracy that seems determined to prevent a small, immigrant-owned business from thriving, husband and wife team Sean Lee and Erica Park find themselves in a situation where their dream has morphed into an administrative nightmare, courtesy of the city of St. Louis' antiquated liquor license process, that leaves them more and more frustrated by the day and wondering why they can't catch a break.

The story of Chicken Seven begins back when they were living in New York, after arriving from South Korea. Lee got a job in beauty supply sales, where he met his friend Victor Jang. Though the two men found success in the beauty industry, they both had a passion for food that led them to seek new paths in the restaurant business. Jang, who managed the territory for the beauty supply company that included St. Louis, decided to move to the Gateway City to pursue his dreams of opening a Korean barbecue restaurant, which resulted in him and his wife founding Wudon in west St. Louis County in 2016.

Lee, meanwhile, headed further south to Texas, where he worked in a sushi restaurant, while Park remained near her family in New York. The pair were eager to settle down in the same city to raise a family of their own, and when they heard about the success their friend Jang was having with his restaurant in St. Louis, they decided to give it a shot themselves. Jang told them that there was a lack of Korean fried chicken spots in his adopted town — something Lee and Park found surprising, considering how ubiquitous the genre was in New York — so they figured they would do their part in bringing the dish, as well as Korean street food, to St. Louis. That concept, Chicken Seven, opened on South Grand in the Carondelet neighborhood last summer. 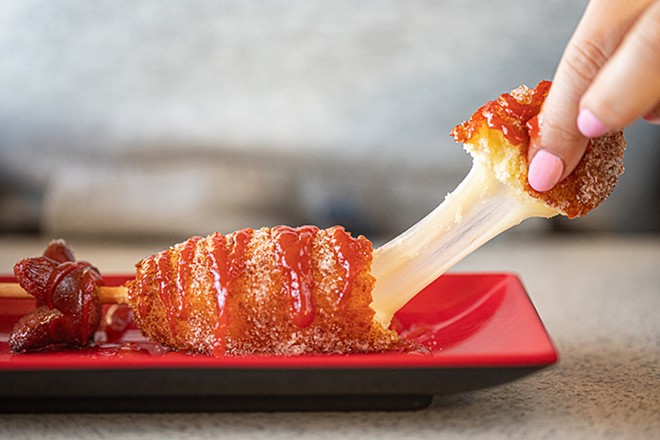 Lee and Park's idea was simple: to open a fried chicken and beer spot similar to the sort of low-key places that are popular after-work gathering spots in Korea. As Park explains, beer and fried chicken are inseparable in their home country in the same way beer and wings or wine and cheese are in the States; you simply can't conceive of having one without the other. They didn't see how offering the two would be a problem here; after all, the building in which they set up shop used to be a bar — it has a Budweiser sign perched atop its roof — so they signed their lease, began perfecting their recipes and embarked on what they thought would be a straightforward path to obtaining a liquor license.

They were wrong. Though Lee and Park did everything they were supposed to do to get a license in the city of St. Louis, they were consistently met with dead ends thanks to a rule that makes applicants gather approval, via postcards, from a certain percentage of the residents in their neighborhood. According to Park, they have been unable to reach the requisite number of residents, despite their best efforts, because of the particulars of some of the neighborhood's residential units. The problem isn't that people have said no to them getting a license; they simply can't get in touch with enough people to make their case. Because they failed to meet the requirement, the city denied their license application.

Lee and Park are crestfallen, and don't know what their path forward is. For now, they are keeping their heads down and focusing on doing what they can to earn a living from food alone (something that anyone who has been in the restaurant business will tell you is very difficult to do). They hope that, for now, people will support them based on their recipes, which seems realistic considering how outstanding they are. Lee, who leads the kitchen, clearly has a gift for cooking, as evidenced by his impeccable fried chicken technique and mastery of sauces. In addition to the "Yum Yum," he offers a delightfully sweet and umami honey-soy-garlic glaze, as well as a spicy soy-garlic sauce that features fiery Korean chili paste and the equally hot "Fresh Pepper-Garlic," made from jalapenos, onions and garlic. All are excellent, though the fried chicken itself is so wonderful, you can eat it plain and not feel like you are missing out on anything. 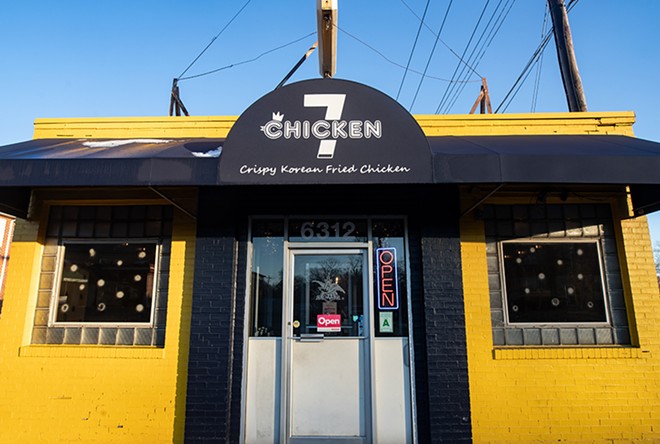 Mabel Suen
Lee and Park have faced an uphill, bureaucratic battle to obtain their liquor license.

Chicken Seven may be anchored by its fried chicken, but Korean street food snacks, like that outrageously decadent corn dog, are also worthy dishes. Cheesy potstickers pair pork and scallion-filled, pan-fried dumplings with shredded cheese and piquant chili aioli. Another snack, the "SDSD," is a skewer of fried sticky rice cakes and hot dogs on a skewer that are glazed in "Yum Yum" sauce. Park says the dish is common gas station food in Korea. I've never wanted to take a road trip across the peninsula more in my life.

Park, with a six-month-old baby boy perched on her hip while she waits tables one-handed, is often aided, after school hours, by her seven year old daughter, who rotates between bussing tables, baby detail and doing her school reading homework. She holds down the front of house while Lee is basically a one-man show in the kitchen, preparing his dazzling dishes for a core group of regulars who want nothing more than for this gem of a restaurant to succeed. When you watch how much of their hearts and souls Lee and Park put into Chicken Seven, you can see how dedicated they are to make that happen. Hopefully, their excellent food will be their saving grace.