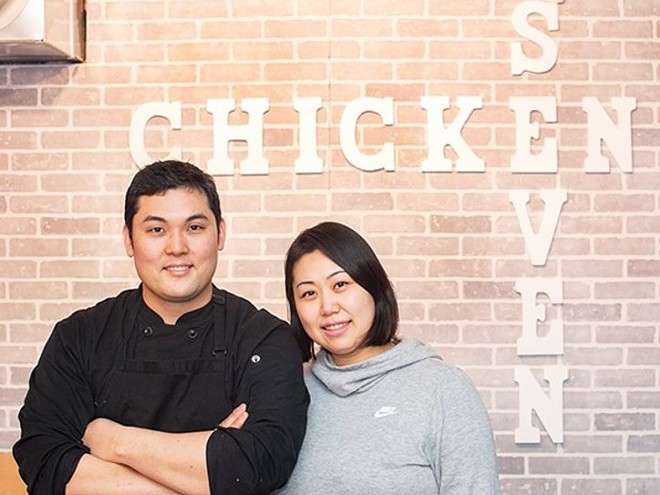 Mabel Suen
Sean Lee and Erica Park are excited to open a new, fast-casual Korean cafe.
St. Louis Hills will soon be a little more delicious thanks to Sean Lee and Erica Park. The husband and wife team behind the popular Carondelet Korean fried chicken restaurant, Chicken Seven, have announced that they will be opening a new restaurant on South Hampton in the coming weeks. The forthcoming fast-casual eatery, Cafe Ganadara (6413 Hampton Avenue), will feature grab-and-go Korean breakfast fare, pastries and desserts like shaved ice, all meant to appeal to hungry diners on-the-go.

For Lee and Park, Ganadara, which is akin to "A B C D" in Korean, is an opportunity for them to share more of their culture with the customers who have warmly embraced Chicken Seven over the past year-and-a-half — something they have greatly appreciated as they faced many hardships, most centered on attempts to obtain a liquor license from the City of St. Louis. As Park explains, many of their regulars have expressed an interest in trying more Korean foods, and rather than take up the limited space in Chicken Seven's kitchen, she and her husband decided their best move would be to open an entirely different restaurant.

"When we first opened Chicken Seven, a lot of our customers didn't know the difference between Chinese and Korean food," Park says. "Now, we have people coming in telling us that they have been to Korea and crave what they tried over there. Also, K-Pop and Korean culture have been getting very trendy lately, so we wanted to share more of that. We thought about expanding the menu at Chicken Seven, but our chicken takes so much time and space to prepare that we did not have the room to do that. We thought a second restaurant would be better."

However, the inspiration for Ganadara goes beyond simply a desire to expand their offerings. As Park explains, she often finds herself looking for healthy breakfast food options after she drops off her children at school and is regularly disappointed by what's available. Longing for the Korean breakfast offerings she grew up eating, Park had the idea to open a casual eatery to help fill that void.

The cornerstone of Ganadara's breakfast menu will be Korean style morning toast, a dish park describes as an egg toast topped with cabbage, shaved carrots, green onions and ham  that is shaped into a pancake and placed between a bun with additional toppings like shrimp, bacon or hash browns and a special sauce.

"It's popular among students, but it is also a good thing for someone in a hurry because it is a perfectly balanced grab-and-go meal," Park says.

Though Park expects the morning toasts to be a popular item, she is also looking forward to showing off her pastry skills with several sweet offerings. She's particularly excited about what is sure to become the restaurant's signature dish: the croffle. Part croissant, part waffle, the croffle is one of Korea's most popular dishes, and according to Park, there is good reason for this.

"It's layers and layers of butter and crunch," Park says. "Soft and buttery on the inside, crunchy on the outside — it's so good. It's the number one selling dish for delivery in Korea, and it's very popular in New York too."

Park and Lee plan to serve their croffles with a variety of toppings, such as homemade pastry cream and fresh strawberries, cookies and cream with homemade chocolate sauce, or Nutella and sliced bananas.

According to Park, there will be much more to Ganadara than breakfast and pastries, though. The cafe will also be a destination for Korean desserts, such as ice cream and shaved ice, which she credits Monica Lee, owner of Spoonful in Creve Coeur, with bringing to St. Louis. Coffee service will be a significant part of the cafe's operations, as will several fresh juices, many made with the Korean citrus fruit yuzu.

Just as Park laments the lack of healthful food options in the morning after school drop off, she and Lee have been just as eager to see expanded offerings in the evening when they get off work. That's why, in addition its breakfast offerings, Ganadara will offer a rotating selection of fast-casual and ready-to-eat Korean specialties, including boneless fried chicken and kimbap, a rolled rice dish often referred to as "Korean sushi."

Ganadara will occupy the small storefront on South Hampton that used to house Yapi Mediterranean Subs, which moved to the Central West End last fall. Park and Lee have been hard at work rebranding the spot, which will have roughly six to eight tables and feature black and white scenery. They hope to open sometime this month, though an early February opening is also possible.

"We want to make people feel like they are in Korea," Park says. "We are looking forward to having somewhere for people to go that is not a fast-food chain and that serves healthier options. There are three different schools on this street, so we hope that everybody who is in need of a quick grab-and-go will come by and try us out."