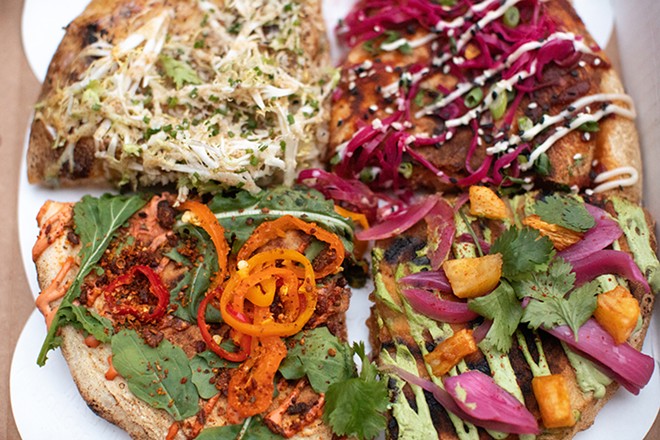 Mabel Suen
Smash "pizzas" from Press include a Potato, a BBQ Kimchin and Duck, an Al Pastor Hawaiian, and a Pepperoni.

Press (2509 South Jefferson Avenue, 314-328-1094) does not serve pizza. This is the one thing Logan Ely wants you to know before venturing into his Fox Park restaurant for one of his stuffed, panini-pressed concoctions. Granted, he and his team call Press' currency "smash pizza," but that's less a reference to its kinship with the form and more of a naming issue. They could have called it a smashed calzone. Closer yet, an Italian quesadilla. One could even make the case that it's a sandwich. For Ely and company, the smash-pizza moniker just stuck, so they decided to run with it.

It's a fitting naming process for an idea itself, which came out of nowhere. An unrelenting creative, Ely has always placed experimentation at the center of everything he's done in his culinary career, beginning with his tenures at acclaimed restaurants across the globe, continuing at his now-shuttered tasting-menu restaurant Shift, and living on in his current hotspot, Lucky Accomplice. At the latter, Ely and his team were playing around in the kitchen one day and started messing with a pizza idea. They joked about smashing the pies, so Ely went home that night, bought a panini press online and told the group they were going to try it. He wasn't completely convinced it was going to work, but he could not shake the feeling that there was something there.

Around the same time, a long-vacant storefront just a few doors down from Lucky Accomplice finally came on the market. Ely and his business partner, Brian Schuman, had been tossing around the idea of taking on a new project; considering this was just a stone's throw away from Lucky Accomplice, they felt they should jump on the opportunity, not only to expand their operation but to help breathe additional life into the block. The smash-pizza idea was already in their back pocket, so they decided to go all in on the concept, figuring they'd work out how to scale their project by the time they'd finished the build-out. 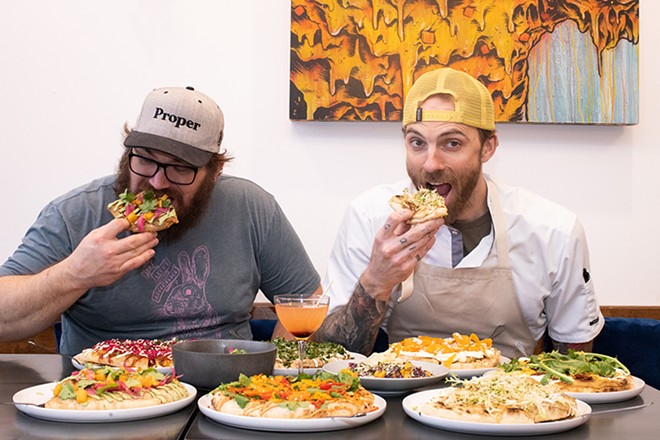 It turns out, they'd have plenty of time to do so. When Ely and Schuman took over the space, it was a disaster; filled with garbage and uneven floors, there was little more to the room than a ramp that led to the back alley. Undeterred, the team cleared out the space and embarked upon an arduous renovation with a shocking result, considering the state of affairs when they inherited the place. Once a garbage dumb of a former garage, the room is now a sleek, modern restaurant with gray concrete floors, white painted-brick walls, clear glass-globe light fixtures, and an L-shaped bar covered in white penny tile and topped with charcoal-colored stone.

Ely admits the smash-pizza development process was nearly as difficult as the renovation. Though it seems like a simple concept — toppings are stuffed into dough, baked, pressed, then covered with more toppings — it turns out smashing a pizza is more involved than it seems. Originally, he and Press' chef, Donn Hinkle, thought they could simply roll out one piece of dough, stuff it, and fold it over onto itself like a calzone. It was an utter disaster, resulting in toppings and cheese oozing out on the press and filling the dining room with the smell of grease smoke. Even the iteration they thought they'd perfected enough to serve at their friends-and-family soft opening was so far below their standards they decided to scrap it and come up with an entirely new way of cooking the smash pizzas for night two.

Now, two months in, Ely, Schuman and Hinkle are still tinkering with their smash pizzas, though they feel pretty good about where they've gotten them to. Their potato version makes you see why. Like all Press' smash pizzas, the potato is round, roughly 10 inches in diameter and about two inches thick. Potatoes, beer cheese and fontina are placed onto a single layer of dough, covered with another and then smashed into a panini-esque press that melds the ingredients together. The concoction is then taken off the press and covered in bitter frisée, which has been tossed in a mouth-puckering mustard vinaigrette that brightens the entire dish. 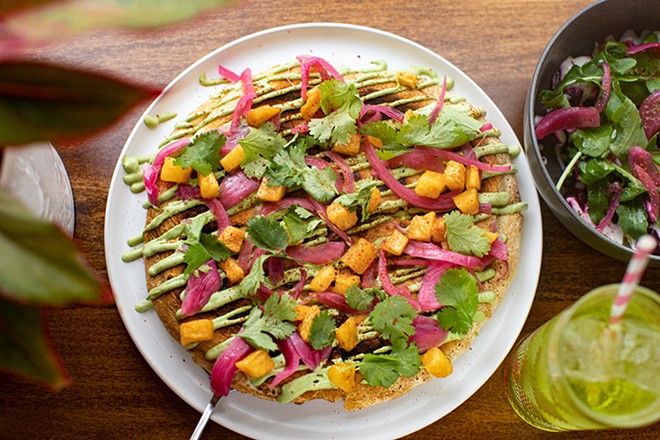 Press' most visually stunning dish is the BBQ Kimchi and Duck, which pairs duck confit and molten scamorza cheese for the filling, then covers the concoction in technicolor pickled red onions, kimchi cabbage and kewpie mayo. The zing from the onions and kimchi were a lovely counter to the rich duck filling, though the highlight was the undertone of sesame oil in every bite.

Like the duck and scamorza on the prior pie, Ely and Hinkle combine shredded pork shoulder with Oaxacan cheese for the al pastor. Hunks of pineapple top the pressed pie, adding a sweet juicy note alongside the verdant cilantro lime crema. There's a touch of lip-tingling heat coming from somewhere on the al pastor, but it's nothing compared to the slapshot to the palate that is the pepperoni. Here, spicy pepperoni and mozzarella cheese are the filling, while shockingly piquant pickled peppers and pepperoni oil underscore the heat.

Press offers a handful of items outside of its smash pizzas, including a delightful bonito and brassica caesar. Here, the beautiful bitter vegetable is made even more acerbic after it's charred on the grill. Bonito flakes and white anchovies add a delightful umami-sea flavor, all of which is countered by razor-sharp pickled lemons. It's a master class in flavor layering. 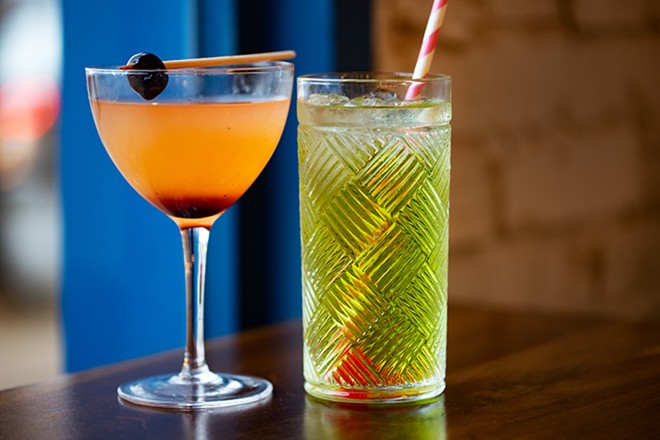 Mabel Suen
Press has an impressive selection of draft cocktails.

Ely and company are especially proud of Press' bar program, run by Corey Moszer, which features a list of 12 draft cocktails (two of which are N/A) that are each carbonated to individual specifications. Highlights include a refreshing rum-based Hemingway and a coconut-fat-washed piña colada. The former is an outstanding way to wash down what may be Press' best offering: its garlic cheese bread. Here, focaccia-like bread pulls apart to reveal whole cloves of garlic that have been roasted to the point of being soft and sweet. The bread is coated in a light layer of molten cheese, giving it the feel of a savory bread pudding. You might even refer to it as a cheesy, garlicky monkey bread.

No matter what you call it, it's delicious.