The future of the burger operation, currently located inside Bluewood Brewing, is uncertain 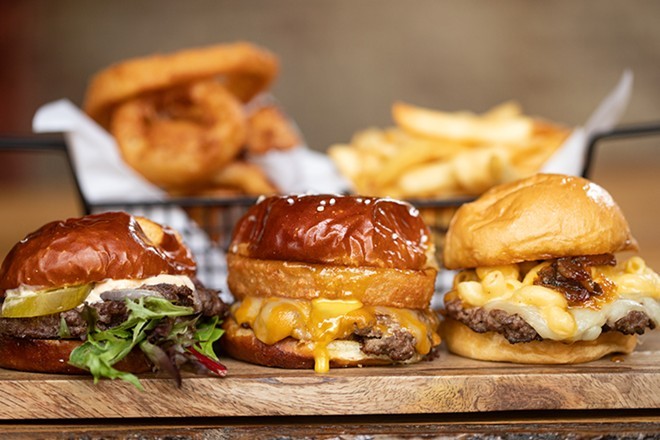 MABEL SUEN
Burger 809, known for its sliders, will close its location inside Bluewood Brewing.

Fans of Burger 809 (1821 Cherokee Street, 314-899-5959), the delightful slider-focused restaurant owned by Tasha Smith, only have a few more weeks to get their fix. The restaurant located inside Bluewood Brewing will close on December 23.

Smith shared the news in a post dated December 6  on Burger 809's Facebook page, detailing the restaurant's rise from a tiny storefront on the west side of the Cherokee Street business district into a wildly successful food counter inside the Benton Park Brewery.

"Burger 809 grew from the concrete, just a dollar and a dream," Smith says in the post. "I'm just a foodie, community health worker, a woman who happened to create a brand that connected people and created some edible magic."

Smith originally opened Burger 809 a few years ago as a catering and delivery operation that she ran while working full-time as a health counselor for people living with HIV/AIDS. In 2019, she launched the brand as a brick-and-mortar eatery out of a micro-sized storefront on Cherokee Street — and realized almost immediately that the space was too small to handle demand for her sliders.

In search of a larger location, she found a welcoming situation in Bluewood Brewing, which was looking for a new food partner for its Benton Park brewery following Mac's Local Eats' departure for the Hampton Inn near I-64 in the Cheltenham neighborhood. Bluewood saw Burger 809's offerings as complementary and cemented a partnership that began when Smith moved into the brewery in January 2022.

In her post, Smith expresses her gratitude to Bluewood for helping her brand expand. She notes that Burger 809 remains financially well-positioned and continues to do a strong business. She did not give a specific reason for her decision to not renew her lease for 2023, simply noting that she "craves a paradise that supports & nourishes every aspect of my being."

Though Burger 809 will no longer exist in its current form after December 23, Smith does not explicitly say that this is the end of the brand, teasing that this might not be the last we hear of her and her delicious sandwiches.

"I have a vision inside me that I know god planted. Burger 809 isn't just a burger restaurant. Thank you to each and everyone one of y'all for making me realize that. So, until we meet again, I love y'all."

We have reached out to Smith and will update this post as more information becomes available. Until then, you can read the entire statement below.


Best Slider? Yea we totally did that! Made 1$ out of .15 cents? Did that! Featured in magazines, newspapers, & even on TV? Yep we did it!

People often ask what’s new? What’s next? Truth is… I don’t know. I never really did. I didn’t have this intricate plan, only determination and passion. Burger 809 grew from the concrete, just a dollar and a dream. I’m just a foodie, community health worker, a women who happened to create a brand that connected people & created some edible magic.

"I knew in mid 2021 that Burger 809 was outgrowing its 300 square foot space. I knew that the little side hustle was taking off & eventually we would need a bigger space to create more magic. At that time I was preparing to close down until I could find a new home equipped to make more tasty sliders. But Burger 809 found a temporary place to call home just a few blocks up. Bluewood so happened to be looking for a new food partner & I was looking for space. In January 2022 the Bluewood Brewery X Burger 809 partnership was created. I’m grateful for the space and opportunity to further expand.

I can only smile when I see how far Burger 809 has taken off!  We are still on track to end 2022  debt free I worked hard to build the Burger 809 brand with little to no resources available and proud of how far we’ve come.

As we approach the year end, I’ve decided not to renew a lease and close Burger 809, officially Friday December 23rd. While I don’t know “what’s next” I do know that I crave a paradise that supports & nourishes every aspect of my being. I have a vision inside me that I know God planted. Burger 809 isn’t just a burger restaurant. Thank you to each and every one of y’all for making me realize that. So until we meet again I love y’all!

Daily Specials will be featured in the stories because I love y’all and this shit is scary, walking away, leaping out on faith, trusting my gut, stepping back when business is good sounds crazy but God is in control. XoXo Tasha."