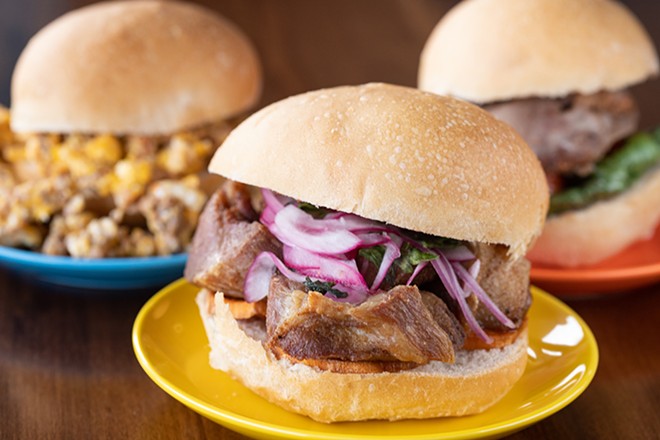 The stuffed potato from South America Bakery (4279 Keaton Crossing Boulevard, O'Fallon; 636-477-6688) is less a creative interpretation of a spud and more a feat of culinary majesty — one that would feel equally on brand billed as a deconstructed-reconstructed "baked potato" at an avant garde temple to molecular gastronomy as it does as a humble snack at a fast-casual O'Fallon strip-mall storefront.

At first glance, this stunning tuber presents as a baked potato in shape, size and color. However, a closer look reveals that it is actually a lightly fried russet-shaped fritter composed of fluffy mashed potatoes that have been fashioned to look like its original form. When cut into, the lightly crunchy golden coating yields to a cloud-like interior filled with ground beef that's accented with olives, onions and Peruvian peppers. The seasoned jus from the meat bastes the potatoes from the inside, which they soak up like a sponge. If you crossed an arancini with South American spiced shepherd's pie, you'd get close to capturing the idea, though the only way to truly understand this marvel is to tuck in and bask in the glory.

Such an outstanding dish might have never entered our lives were it not for chef and owner Luigi Guzman's dog. Growing up in Lima, Peru, Guzman loved his family's pet so much that he would spoil it every way he knew how. One of the ways he showed his affection was through food, and he would often cook for the pooch using leftovers or whatever ingredients he could find around his family's kitchen. One time, when he was around 16 years old, Guzman was inspired to make the pup a stew, so he put everything together, left it simmering on the stove and went out to play soccer. When he returned, the pot was basically empty, and his mother asked him about his concoction. Startled, he informed her the meal was meant for the dog, to which she replied, "Don't tell your stepfather. He ate four bowls." 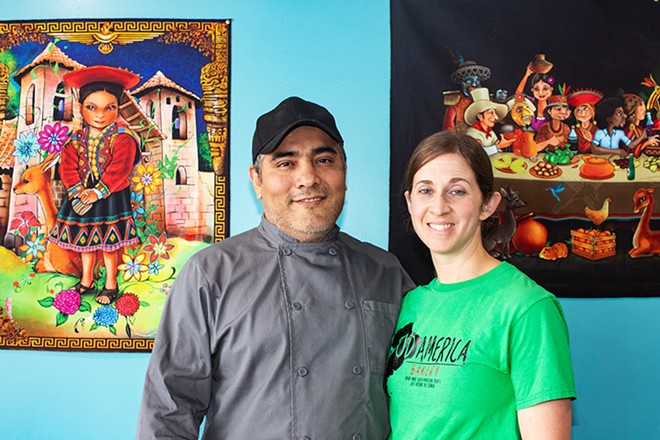 From that moment on, it was clear to Guzman and his family that he had a knack for cooking, so when it came time for him to decide what he wanted to do for a career, culinary school was the natural pursuit. After graduating, he cooked around Peru, Chile (where his father is from), Venezuela and Brazil, learning the nuances of each country's culinary traditions before landing in the United States in 2013. Once here, he settled into the restaurant industry, met his wife, Kathryn, and began dazzling friends, family and coworkers with his talents.

Guzman's specialty was pastry — in particular, empanadas — and as more and more people got a taste of his offerings, he and Kathryn realized that he might find success striking out on his own. He began selling empanadas at the Lake Saint Louis Farmers & Artists Market, where he developed such a following that he decided to expand to other area markets such as Maplewood, St. Charles, Kirkwood and Ferguson. No matter where he went, people would consistently ask him where his bakery was located or if he had a storefront. When he informed them that he did not have one, the response was always the same: You need to change that.

The Guzmans finally decided to take that leap, opening the doors to their casual O'Fallon restaurant, South America Bakery, in 2021, all the while continuing to work the farmers market circuit during its season. Kathryn notes that the brick and mortar and market presence have been symbiotic; when they run out of empanadas at the Lake St. Louis market (which happens every time they are there), hungry customers will head over to the bakery to get their fix. 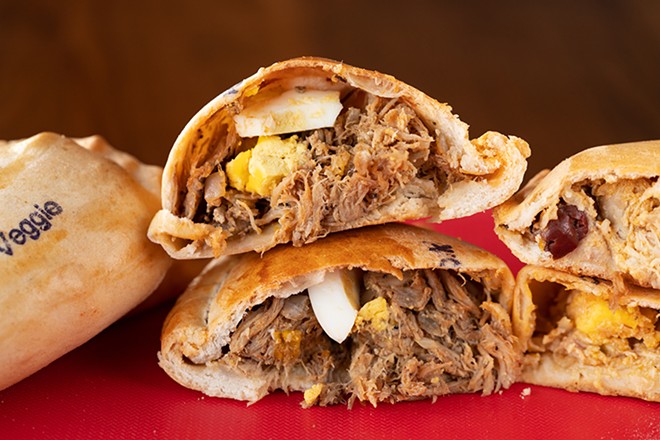 Once you've tried one of Guzman's empanadas, you understand why they make the trek. The chef offers two different styles of the South American savory pastries — baked and fried — each filled with a variety of delectable ingredients. Though the dough is the same, each style has its own unique character. Baked, the crust is smooth and buttery like a pot-pie topper, then hand-pinched around the edges after it's filled with such ingredients as tender steak, hard-boiled eggs, mild Peruvian peppers and olives. A veggie version pairs broccoli, cauliflower, spinach and peppers, all sauteed in soy sauce to the point where they are tender but not mushy for a warm, satisfying filling.

Both the chicken and pork empanadas are a master class in succulent, slow-cooked meats. The former features juicy pulled chicken mixed with peppers, olives and eggs and molten, mild white cheese. The latter, studded with the same ingredients as the chicken (minus the cheese), is so tender it's like South American-seasoned pork rillettes. Of the baked empanadas, this was the showstopper.

Guzman also offers two fried empanadas that are an entirely different experience from the baked ones thanks to their pleasantly fryer-gilded texture. One pairs thinly sliced ham with delightfully funky white cheese, while the other dazzles as a simple, cheese-stuffed concoction filled with two different cheeses that form a magnificent goo that lies somewhere between liquid and solid.

In addition to empanadas and stuffed potatoes, South America Bakery serves a few different lunch sandwiches, including the salchicha huachana. This breakfast-for-lunch concoction pairs mild, crumbled housemade sausage (think breakfast sausage with a little piquant zing) and scrambled egg, which are tucked into a pillow-soft housemade bun. That bun, a hybrid of French bread and brioche, is a beautiful canvas for fried chicharron; the hunks of mouth-watering pork are garnished with roasted sweet potatoes and sliced raw red onions that cut through the meat's decadence. My favorite of the restaurant's sandwiches, the jamón del país, is basically the Peruvian version of porchetta: marbled, slow-roasted seasoned pork that is sliced and layered with onions on Guzman's signature bun. Though served at a casual restaurant, the dish has the soulful feeling of the sort of sandwich you'd make from Grandma's leftovers.

Guzman's culinary prowess extends to sweets as well. South America Bakery serves a good selection of traditional Peruvian pastries, including melt-in-the-mouth alfajores, which are butter shortbread cookies filled with luxurious, caramel-ly dulce de lece. That same filling is layered with flaky phyllo-like dough to form the outstanding milhojas, or stuffed into a delicate, cone-shaped cañoncito; as excellent as the pastry is, you could serve that dulce de leche in a Dixie cup with a spoon, and it would still be a wonderful end to an excellent meal.

Then again, so would a second helping of that stuffed potato. That Guzman has me thinking of anything else after eating that glorious spud shows that he is a chef of many talents.