The Foundry spot sets a new standard for a St. Louis classic 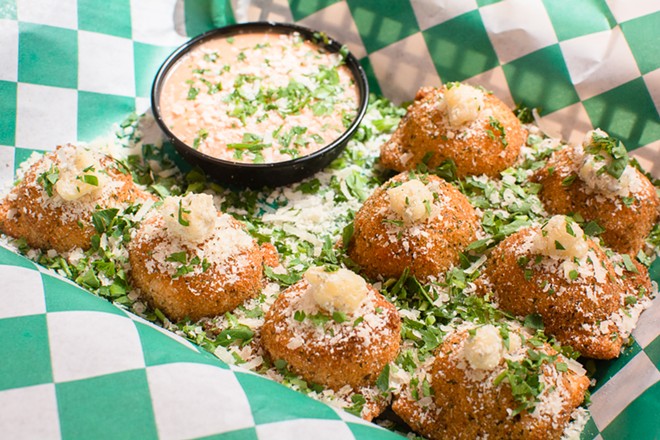 It was the beginning of 2020, and Matthew Fuller was looking forward to an exciting year. For the first time ever, he was booked solid with music gigs for the entire calendar, a lineup of shows that would take him all over the country doing what he loved. He was on top of the world, but in a few short months, he watched each of those shows get canceled as the pandemic ravaged life as we knew it. It was hard enough to bear, but things would get worse for Fuller a couple of months later when a car accident upended his life, leaving him homebound and debilitated for a year.

Fuller was unsure of what to do with his life. Even as he regained his strength, his music career has not yet rebounded. He had worked in real estate to pay the bills prior to the pandemic, but it wasn't the path he wanted to take. His wife, Brittany Abernathy, had some ideas. She reminded him that there was something else he loved to do; Fuller had always been a talented home cook and had enjoyed his time working in restaurants. Surely there was a way to turn that passion into something more.

Abernathy's suggestion sparked something within Fuller. In 2014, he had the idea for a concept that would feature different types of toasted ravioli. What form it would take, he wasn't sure, but he figured that a million other people surely had the same idea and never pursued it. However, the idea came flooding back to him, and one night, for a dinner party the two hosted, he decided to try out making toasted ravioli from scratch. His friends loved them, which made Fuller realize he could actually make a go of his idea. He turned to Abernathy and asked her if he should do it. Her answer, without hesitation, was yes. 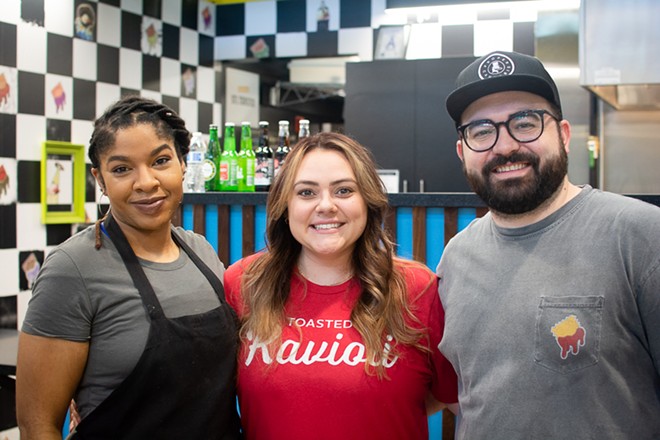 Abernathy and Fuller joke that, once they set their plans in motion, those plan took on a life of their own. Even before they had their first pop-up, they'd secured a meeting with the culinary team at City Foundry through a mutual acquaintance; the Foundry folks were so impressed with the toasted ravioli idea that they sent Abernathy and Fuller a letter of intent, asking them to be a part of one of the first waves of vendors in the Foundry's food hall. Quickly, Abernathy and Fuller began working out recipes and partnering with their friends at their local watering hole, the Drawing Board, for their first pop-up under the name STL Toasted (3730 Foundry Way). The buzz that first event generated led to a few additional pop-ups, and before they knew it, they had a robust Instagram following that was banging at the doors when they finally opened at City Foundry on June 1.

Though there is no t-rav shortage in the St. Louis area, the reasons for all of the fanfare surrounding STL Toasted are clear once you try their wares. Not only have Abernathy and Fuller created more versions of a uniquely St Louis dish; they have shown us how good our deep-fried stuffed dough pillows can be when treated with the care and respect they deserve. STL Toasted's ravs are no dinky, long-frozen fare you drunkenly gobble up between shots of Jameson at your local dive bar. Fuller's beauties are robust, voluptuous pillows, their thick dough more akin to a hand pie than rubbery, big-box bar fare. Fuller makes the dough from scratch every day and rolls it out slightly thicker than traditional toasted ravioli; as such, it almost has a baked feel to it because it doesn't soak up as much grease from the fryer as a thinner version.

ANDY PAULISSEN
STL Toasted is open in the Foundry.

Fuller's care with the dough sets the tone for the entire STL Toasted experience. His original beef version, for instance, ticks all of the flavor boxes you want from a classic St. Louis t-rav: seasoned ground beef, marinara sauce with a hint of, but not too much, zest, umami from parmesan cheese and a whisper of fryer grease. However, his components are the best versions of themselves: The meat is tender but not pasty, the sauce is shockingly bright and the parmesan is freshly shredded and poured so liberally over the top it looks like the ravs got caught in a snowstorm. This is the standard by which all other toasted ravioli should be judged

STL Toasted shines beyond the classic. Herbed ricotta dominates the three-cheese version (mozzarella and parmigiano-reggiano round out the rest of the cheese filling), giving the ravioli the feel of a fried manicotti. A loaded-potato option gives you all the joy of a potato skin — creamy potato mash, bacon, cheese and green onions — nestled into a deep-fried pasta shell. Paired with a side of green onion–flecked sour cream, it gives the bar and grill staple a run for its money. Spinach artichoke ravioli, too, takes the joy of a classic appetizer, spinach dip, and presents it in a creative form.

However, STL Toasted's most delectable savory offering is its Buffalo chicken rav. A true patriot like Fuller does not simply fill a standard shell with some Buffalo-seasoned chicken. Instead, he begins by infusing his regular dough base with Frank's Red Hot, then stuffs the pasta with tender, Buffalo-sauced shredded chicken, cheddar and mozzarella cheeses and green onions. And lest one think they have to choose between being a ranch or blue cheese person, Fuller pairs the dish with both a Franks Red Hot–infused, chunky blue cheese sauce and zesty ranch dressing, giving you the funk, heat, cream and zing that is the best of both worlds.

STL Toasted's sweet offerings are equally successful. A lemon-blackberry gooey butter cake version stuffs housemade gooey butter cake into a lemon zest–infused dough, a combination that sounds over the top but is surprisingly balanced and restrained. A side of tart blackberry coulis cuts through the sweetness. As delicious as it is, the Oreo Cheesecake Truffle dessert ravioli steals the show with its cocoa-flavored dough and filling made from crushed Oreo cookies and mascarpone cheese that flows out when pierced like a thick, chocolaty cookies-and-cream river. The only thing that makes this better is dipping it in the accompanying fresh whipped cream or delectable coffee-mascarpone glaze. Abernathy and Fuller created this masterpiece to honor a friend who recently lost her battle with mental health. It's a beautiful tribute and one that underscores how, under its easy, whimsical vibe, there is real substance to STL Toasted.

ANDY PAULISSEN
STL Toasted’s sweet offerings are as successful as its savory ones.

It's something the community has clearly picked up on; Abernathy and Fuller can barely meet demand and have even signed a lease on a production space in order to fulfill their customers' desire for more ravioli. Fuller jokes that taking on another thing in the midst of all they have going on is intimidating but that he keeps asking Abernathy what to do, and she keeps saying yes. Her position is understandable. How can anyone say no to STL Toasted?