ANDY PAULISSEN
It doesn't get more St. Louis than Hodak's.


Editor's Note: An earlier version of this story referred to Tony Hodak's wife at Ellen. Her name is Helen. We regret the error and apologize to her beloved grandchildren, nieces and nephews who knew her chicken better than anyone.

It's 9:50 a.m., and Steve Connors hasn’t even finished cutting up his lemons and limes for cocktail garnishes when two customers appear at his bar. Without looking up or saying a word, he grabs their beverages and a couple of menus, knowing that the latter are mere formalities. These regulars — like most of the regulars who come into his bar at Hodak’s (2100 Gravois Avenue, 314-776-7292) — are so well-versed in the offerings that a menu is almost an insult. Besides, the reason they’re there is obvious: They want the chicken.

Scenes like this are common at Hodak’s, the south St. Louis fried chicken institution that has been serving up breaded birds since 1962. Originally a tavern called Matt and Tony’s located on the corner of 14th and Emmet streets, the outfit was more concerned with serving as a watering hole for factory and brewery workers than it was with frying chicken. However, once the eponymous Tony Hodak’s wife, Ellen, began bringing in her fried chicken for the staff and patrons to enjoy, there was no turning back. It became the tavern’s signature item, and when the husband and wife decided to buy out their partner and move to their current spot on the corner of Gravois and McNair avenues, it was settled that the new restaurant would have chicken as its focus. 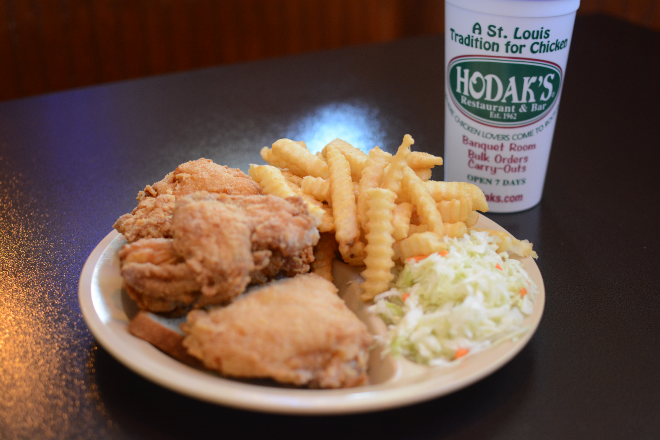 Connors hasn’t been there for the entire run, but he has worked at Hodak’s for 32 years. At the time he started, he was out of work and figured he’d bartend to make ends meet until he found, in his words, a “real job.” However, from the moment he walked into the place and interviewed with Tony Hodak, he knew that he was getting into somewhere special.

“When I walked in the door the first time, I felt home for some reason,” Connors says. “I can’t explain it. I thought this was just going to be a temporary thing and had no idea I was going to be here this long.”

Big changes came to the restaurant not long after Connors signed on. In 1989, just a month and a half after he started, Charlene and Ralph Hegel bought Hodak’s from its founders. The husband and wife had been in the restaurant business and were already looking for an opportunity to work together when they learned that the Hodak family was getting ready to retire. It was a perfect confluence of circumstances that allowed them to realize their dream of running a place together, and they threw themselves fully into the operation. Before they bought the business, Hodak’s just served chicken, fries and coleslaw; under their leadership, the restaurant expanded its menu, offering sandwiches, salads and appetizers. They also gave the place a makeover, and eventually bought the adjacent beauty shop and trucking company storefronts so that they could expand to meet the growing demand for their chicken.

ANDY PAULISSEN
The hand-breading comes from a secret recipe. Fortunately, Hodak's is is always making more.

The investments paid off. According to Connors, before the Hegels came on board, the restaurant did good business, but nothing like today. Now — at least pre-COVID-19 — it’s not uncommon to have a line stretched down the entrance hall, out the door and around the building on Saturdays and Sundays.

“We’re just an institution and a mom-and-pop place, and I think people like that,” Connors says. “We have people come in on their way to the hockey or baseball games, for graduations and funerals and first communions and retirements. I’ve seen three or four generations of families come through, some at the same time.”

Connors credits the chicken with packing the house. The poultry comes in fresh, never frozen, and is hand-breaded with a secret recipe even he hasn’t been able to get his hands on in his three decades of working at the place. Every order comes out piping hot, with steam rising out of each piece when you crack them apart, and he believes the reasonable price point makes the food accessible to everyone. However, he understood from his very first day working behind the bar that Hodak’s is about much more than chicken.

“Every day, you never know who you’re going to meet and what kinds of stories you’re going to hear,” Connors says. “Every day feels the same, yet different. The bar is such a friendly atmosphere. If you don’t know the person next to you when you get here, you’re going to know them before you leave.”

His coworker of seventeen years, Denise Price, chimes in while setting up her tables for the 10 a.m. rush: “It’s not just chicken; it’s tradition.”

ANDY PAULISSEN
St. Louisans have been heading to Hodak's for generations.