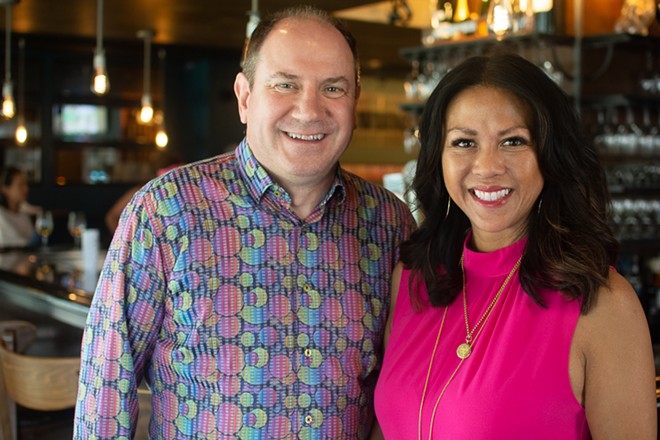 Andy Paulissen
Stanley and Arlene Brown are the toast of the town.

Arlene Browne will never forget her reaction when her husband, Stanley Browne, suggested they look at a storefront in Webster Groves for the wine bar they were getting ready to launch.

"Finding a location was such a hard thing; we had the Central West End in our heads and were looking there very hard, but things fell through," Arlene says. "Stanley told me that he wanted me to look at this place in Webster Groves, and I told him that I didn't even know where that was. I wasn't familiar with Highway 44 and didn't really know anything about it, and then he took me there, and there was almost nothing on the street. I told him I didn't know how it was going to work."

Fifteen years later, the Brownes have seen their decision to open Robust Bistro and Wine Bar (227 West Lockwood Avenue, Webster Groves; 314-963-0033) in the heart of Old Webster as the best decision they ever made. Not only have they had front-row seats to the area's explosive restaurant scene growth, they have become a vital part of the community as much as it has become a part of them. From the 2008 financial crisis to the pandemic and the highs and lows in between, Stanley and Arlene credit their Webster Groves neighbors as being the key to their success.

It's been like this from the get-go, something that ceased to surprise the Brownes the more they got to know the area. As Stanley explains, he had the feeling that Webster Groves was hungry for restaurants as much as the St. Louis area, at large, was hungry for a wine bar. Having spent a decade as one of Bommarito Wines & Spirits' top sales representatives, Stanley saw up close the desire for a place where people could come to not only enjoy wine but to expand their horizons in a comfortable setting. As he'd help restaurant managers and employees navigate Bommarito's wine lists, he began to sketch out with Arlene an idea to provide that experience to the area's dining scene.

It was something he was well positioned to do. As a kid growing up in England and Ireland, Stanley Browne came to wine at an early age.

"My dad was a big Burgundy and Bordeaux collector, so I grew up drinking the good stuff," he laughs. "I didn't start out with Boone's Farm or something like that."

His father was no mere hobbyist, however. The family owned a bed-and-breakfast in Ireland, and Browne began helping them run the business when he was 16 years old. He parlayed this knowledge into professional studies, going to school in Galway, Ireland, for hotel and restaurant management and then working in Basel, Switzerland, before coming to St. Louis. Once here, he worked for Marriott Hotels and the Seven Gables Inn and eventually transitioned out of restaurants to Bommarito Wines & Spirits.

Andy Paulissen
Wine drinkers can enjoy a glass or bottle at Robust or take one with them.

Wine education was always important to Browne, so while at Bommarito, he founded the St. Louis Wine Clinic with his colleague Chris Hoel. The course served as a study guide for aspiring sommeliers, but it also drove home for Browne how much he wanted to share his deep wine knowledge with those both in and out of the industry. He decided he was ready for a new challenge; Arlene, who had a background in marketing and public relations, was ready, too, so together they left behind their day jobs, signed a lease in Webster Groves and opened Robust in September of 2007.

At the time, Robust felt like a gamble. Not only was the Webster Groves food scene untested, there were only a few wine bars in town, and none offering the sort of experience Stanley and Arlene were. The Brownes' model was (and remains) centered on expanding their guests' wine knowledge, so they offered three-ounce tasting pours in addition to the traditional six-ounce full pour. Flights were central to the Robust experience, and Stanley would make sure to ease people into trying new things by pairing a recognizable wine with lesser-known varietals. The pair also curated an impressive retail wine selection, so guests could take bottles with them and experiment at home.

"We felt that, at the time, most restaurants in St. Louis had these regular lists, and there wasn't much guidance there for the customers," Stanley says. "We wanted to offer that. When you learn about wine, you learn about so many other things — history, geography, soil. We wanted people to be able to learn in a restaurant setting in an approachable way, not snobby or with the old sentiments that people had about wine."

This central philosophy has not changed, even though much about Robust has evolved over the years. Stanley and Arlene are proud that they have been able to find ways to stay fresh and relevant as the metro area's restaurant scene has exploded around them. They've transitioned out of their wine-adjacent retail, expanded their food menu, added a Clean & Juicy line of healthful beverages such as alkaline waters, bone broths and cold pressed juices, and expanded their beer and cocktail programs to reflect the changing tastes of their guests. They've also weathered professional hardships, expanding to downtown St. Louis and Edwardsville, Illinois, then closing those outposts to refocus on their original Webster Groves spot.

Andy Paulissen
Robust is located in the heart or Webster Groves.

Even 15 years in, the Brownes are continuing to do new things. In celebration of the milestone anniversary, the pair have decided to rebrand themselves from Robust Wine Bar to Robust Bistro and Wine Bar.

"Food is 50 percent of our sales, but there are a lot of people who think we just offer cheese and crackers," Stanley says.

Another change is the launch of a new ghost-kitchen concept called R BBQ, which will offer smoked meats and sides for guests to order online and take to go. The kitchen, a partnership with their longtime friend Vito Racanelli, will start out as a monthly offering, though the idea is to make it a weekly event as a way to fill the area's barbecue void.

Stanley and Arlene know their guests will appreciate these changes, just as they have stuck with them as they have grown and evolved over the years. They know that much of their success is owed to offering a unique, wine-focused experience, good food and a relaxing environment. But when they really think things through, it's clear that their guests have a deeper relationship with what they've created.

"Webster and the community have been great to us and have been so supportive," Stanley says. "It's been a great relationship over the last 15 years, and I think the reason people have such feelings for us is because they've created a lot of memories here over the years. People remember this night or that night and how they felt when they were here. It's beyond grabbing a drink; it's creating memories."