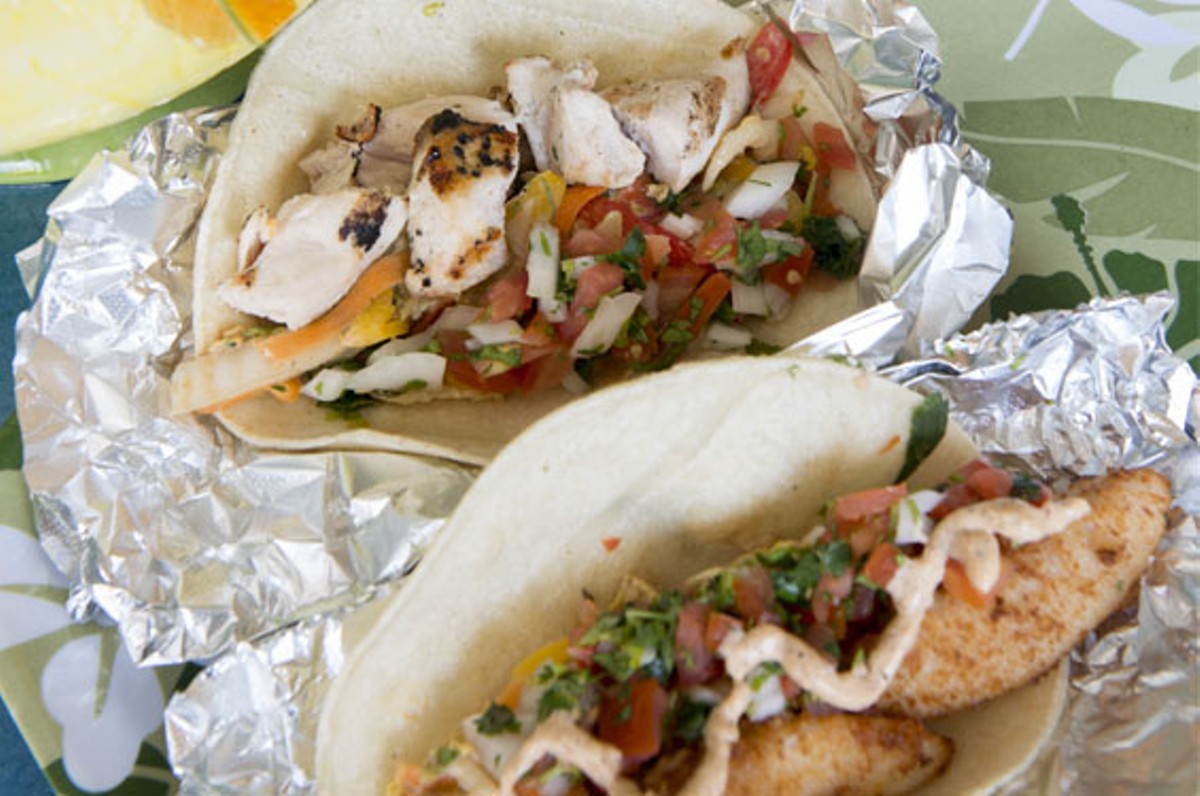 Taha'a Twisted Tiki is the latest brainchild of Lucas and Derek Gamlin, two brothers who clearly have their fingers on the pulse of the latest liquor trends. Their previous ventures, SubZero Vodka Bar and Gamlin Whiskey House, were runaway successes, and if recent chatter in industry publications is any indication, rum is poised to be the next "it" spirit. Couple this with our ironic, vintage-obsessed culture, and it's no surprise that the kitschy Polynesian tiki lounges of the 1970s are making a comeback around the country.

By opening the only local tiki bar, the Gamlins had the opportunity to set the standard for the bevy of copycats that are sure to pop up as the trend gains momentum. Instead, the brothers missed the outrigger this time around, opting instead for mediocre bar food served in foil-lined paper containers — it makes the food feel like an afterthought to Taha'a's vibrant cocktail program.

Out back, the double-decker patio, with its thatched bar and tiki torches, made me feel as if I were on an island vacation rather than in the middle of the Grove. Indoors, however, the décor looks cheap. Disposable rainbow-colored leis and faux palm fronds that could have been purchased from a party-supply store decorate the room, while slick, black leather banquettes provide seating. It's an odd juxtaposition. The two televisions behind the bar that play a continual loop of beach scenes fail to create any ambiance.

Taha'a Twisted Tiki is spot-on with a cocktail menu that consists of all the tiki classics and some signature concoctions. My favorite was the "Zombie," a mix of every type of rum under the sun tempered by tart lime, grapefruit juice and grenadine. A little absinthe isn't discernible in the taste, but it adds to the drink's danger factor — as does the ceramic shark-head mug it's served in. The classic mai tai is a citrusy-sweet sipper, and the "Pineapple Punisher" tastes like a boozy pineapple upside-down cake. The bartender lights it ablaze with 151-proof rum, which is fun, although I wish I'd been advised to remove my straw first.

Fortunately the cocktails are strong; this food is best eaten with a buzz on. The Taha'a wings are the best item on the menu — plump, juicy and coated in a sweet and sticky soy-ginger glaze. The traditional Hawaiian tuna poke is another worthy effort. The thin slices of raw fish are topped with a salad of macadamia nuts and bok choy, then tossed in a citrus-soy dressing. I only wish the tuna had been diced or cubed — the long strips were difficult to manage. The "Big Island Sliders" were adequate, but the pineapple-teriyaki topping didn't help much. I much preferred the crispy sesame fries I ordered as a side dish, though they needed a hefty dose of salt.

The Polynesian beef taco consisted of cubed steak tossed in a teriyaki-esque glaze. The beef had good char to it, but the dish was otherwise bland. The whitefish tacos tasted fishy, and the breading had an unpleasing, gummy texture. Both tacos were served with an Asian slaw of julienne carrots, cabbage and cucumbers and some pico de gallo — throwaway fillers that did nothing for the dish.

The saddest offerings on the menu were the skewers, which looked more like a dinner foraged from the bush by a contestant on Survivor. I was thrilled to see char siu — Cantonese barbecued pork loin — on the menu, but was horrified with the result. It was a thin, bright red piece of meat, sinewy and with about as much flavor as a flip-flop. And yet it was far superior to the chicken skewer, which was covered in a sweet, gelatinous film called "Taha'a Sauce." That this is the restaurant's "signature sauce" speaks volumes on the food.

Apparently, the Hawaii State Fair was in session, as I don't know how else to explain Taha'a's lone dessert selection — deep-fried Oreos. However, as embarrassing as it is to admit, they were delicious, like Oreo-flavored funnel cakes.

The Pacific Rim has a vibrant culinary tradition, and the Gamlins had the opportunity to really showcase it. Instead, they phoned it in on the food, perhaps figuring that patrons would be too liquored up by the potent cocktails to care. Anyone looking for a proper meal, however, will find Taha'a is no day at the beach.