There's Poop in the Drinking Water at Some Missouri State Parks! Doesn't Anyone Care? 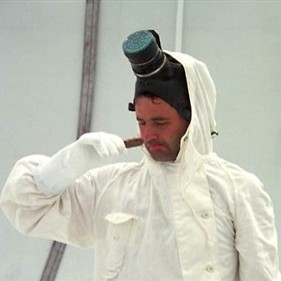 A national environmental group is calling for a federal review of drinking-water quality at Missouri's state parks, citing a failure to perform federally mandated testing, as well as repeated instances of contamination with coliform bacteria, including E. coli.

Now that we're all on the same page.... What caused the nonpartisan group Public Employees for Environmental Responsibility (PEER) to point the stink-finger at the Missouri Department of Natural Resources?

According to a complaint PEER filed yesterday with U.S. Environmental Protection Agency (EPA) Regional Office, while the state DNR has uncovered more than a dozen drinking-water violations in state-park water systems since 2010, the agency has failed to take action to correct the problems.

The DNR is responsible for overseeing Missouri's nearly 2,800-plus public water systems, 44 of which are located inside state parks.

"The state appears to enforce drinking-water rules much more rigorously against systems other than its own facilities," says PEER staff counsel Kathryn Douglass, who filed the complaint.

The PEER paper zeroes in on Cuivre River State Park in Troy, about an hour northwest of St. Louis in Lincoln County. The DNR's website refers to the park's Camp Derricotte as "a nature lover's paradise" and features a video of visitors swimming in its waters, but the park logged violations for E. coli in July, August and September 2011, and again in April and May of last year.

According to PEER, Derricotte racked up six violations of the EPA's "Maximum Contaminant Level" standard over the seven months it was open in 2012 and is among the worst of the state's public water systems at complying with federally mandated regulations. Yet the DNR largely ignored problems at Camp Derricotte, the complaint alleges:

"There is no record of formal warning letters and the only hint of enforcement on record is a computer generated mailing. The Camp Derricotte system has not been required to enter into a binding agreement as all other public water systems with similar records of non-compliance must do."

There haven't yet been any illnesses reported from Cuivre River, a phenomenon PEER's Douglass chalks up to luck. "Good luck," she clarifies, adding, "how long can you walk this line, saying you're resolving your issues and you're not? Every month they were open, they failed the tests."

PEER filed its complaint in tandem with Patricia Ritchie, a former state employee who worked as the DNR's public notice coordinator for Safe Drinking Water Act compliance for nearly twenty years. Ritchie voiced her dissatisfaction about the quality of drinking water at state parks back as far back as 2002. In 2004 a state auditor's report confirmed her allegations. She was fired last year and will bring her case in front of an administrative hearing commission this month under Missouri's Whistleblower's Protection Act.

We're reaching out to Ritchie's attorney. Check back for details on her case.