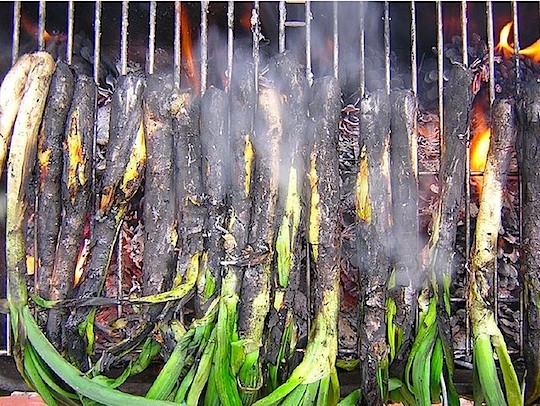 Calçots roasting over an open fire | image via

Spring is in the air, which means the smell of charred leeks is soon to be in the air as well. Chef duo Wil Fernandez-Cruz and his wife Lisa are hosting a Calçotada Festival on May 19 as a sort of welcome back party for the warmer weather.

Traditionally a Spanish celebration of Spring and the bounty of produce it ushers in, the Calçotada Festival invites guests to come and feast on calçots, a member of the onion family that closely resembles a leek. At St. Louis' first Calçotada, Wil and Lisa will be wood roasting spring onions, sausage, and lamb and inviting guests to dip these treats into romesco sauce made with hazelnuts and roasted peppers. They'll also be passing around porrons of rosé wine, which is to be poured straight into drinkers' mouths.

Lisa first encountered the Catalonian festival while working in New York City, first at Savoy, then at Back Forty.

"The owner of Savoy had been doing it since '97 or '98 after going to one in Spain," Lisa says. "I got the chance to do this every year right when the good spring weather hits. It was crazy. We'd pack people in and put a grill on the New York City sidewalk. Everyone would be drinking, and there would be all this sausage and flamenco dancing. No one was conforming to any standards. It was all about celebrating the produce we'll be getting."

The Fernandez-Cruzes moved to St. Louis late last summer to work for The Restaurant at the Cheshire, and Wil now runs the kitchen at Ibby's on the Wash. U. campus. Lisa realized that this would be the first year in a long time that she would miss the Calçotada Festival in New York, but rather than mope about it, she decided to throw her own party in St. Louis.

"If my house was big enough I'd do it there," Lisa says, "but then I thought I should do something that involved the whole community. The St. Louis community is close knit, and any food event here is so lighthearted and fun. I thought it was the perfect celebration for St. Louis."

For this inaugural event, Wil and Lisa have started a pop-up event team called De La Finca. Lisa says this festival will be the test to see if a pop-up event company can work, but if nothing else, it will be a fun way to make food-centered celebrations happen throughout the summer.

The Calçotada will be held at Starrs (1135 S. Big Bend Boulevard; 314-781-2345) in Richmond Heights, and reservations are required. Tickets are $50 and can be purchased through the De La Finca website. That 50 bucks will get you lots of food and fun and bottomless porrons of rosé ("We'll be at a wine shop," Lisa says. "There's no running out of wine."). The party starts at 2 p.m. and will rage on until everyone is so full of food and wine and the promise of a bountiful Spring that they have to roll themselves home.