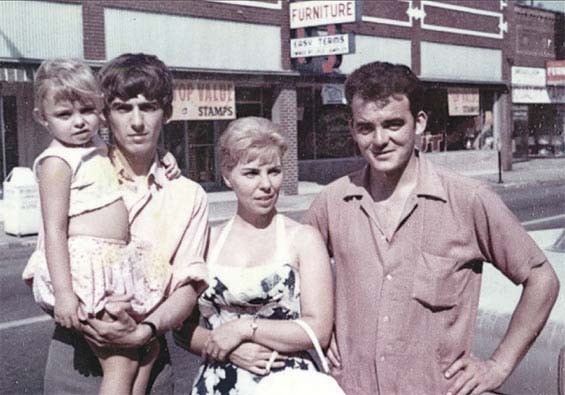 If it weren't for coal, you would not be reading this. If it weren't for coal, a British wife, her Scottish husband and their two young children never would have left their home in Inverness, Scotland, in 1956 and taken a journey that led them to Canada, Peru and finally to Benton, Illinois, where they landed in September 1963.

The husband was an engineer in the mining business. The wife was George Harrison's sister.

Louise Harrison — the only Beatle sister — stayed in the Midwest for much of the last five decades, primarily in Illinois and Missouri. In that time her life was not marked by anything out of the ordinary. Divorce, various jobs, moves to small towns and big cities, birth, death, good moments and bad moments. Yet there was and always will be that one thing that makes her anything but ordinary, that blood link to a man who is revered throughout the world, a brother whose fame transcends fame itself.

It's hard to imagine being in her shoes. Do you take advantage of the name, or try and disassociate from it? Eldest sibling Louise, 83, and family baby George bookend the four Harrison offspring; in between were Harry and the late Peter Harrison, who died of cancer in 2007. The brothers — who both worked for George as groundskeepers after he purchased a massive, Downton Abbey-like estate in England in 1974 — shunned the spotlight completely.

Louise, not so much.

Back in '63 she promoted the Beatles to any media outlet in the Benton area that would listen; bear in mind the group was unknown in the United States at the time. She petitioned radio and TV stations, sent letters, made calls, wrote Beatles manager Brian Epstein lengthy letters advising how to break the band into America. (Epstein refused to make Louise an official band rep). In '64 and '65 she wrote and broadcast "daily Beatle reports nationwide."

Since those heady days, she has given countless interviews, spoken to "her global family of Beatle people" at numerous functions around the world, and, for the past ten years, managed Liverpool Legends, a Branson-based Beatles tribute band.

Now after spending most of 50 years in the Midwest, Harrison set off this past December for California, leaving behind two properties she still owns in Missouri and enough memories to fill a 354-page book. Louise Harrison's autobiography, My Kid Brother's Band a.k.a. The Beatles!, came out last year from Acclaim Press and tells the story of her early life in Liverpool, her subsequent move to America, and ups and downs as a mother with two alcoholic husbands. All of it centers on how her life has been intertwined with her brother George's.

"It was the guy who plays my brother in Liverpool Legends who urged me to do it," Harrison says of the memoir. "I was not at all interested, but he said, 'All that stuff you did in 1963, helping Brian to know what to do to get the Beatles started over here, that's all kind of important, and nobody knows about it.' I said I wasn't doing it for publicity, I was doing it to help my kid brother."

The guy who plays her kid brother — a surreal idea at that — is Marty Scott, a man Harrison says has "filled the space that George left in my life in many, many ways."

"I think she was grieving a bit when I met her," says Scott of their 2001 introduction shortly after George died. "It might have given her something to hold onto a bit, but we've gone so far past that. I've probably spent more time with her than George did."

That's no exaggeration, given two facts: Harrison has worked with Scott for fifteen years, and she left Liverpool when her brother was twelve. The next time she saw George, he was twenty and she 32, living in a 1930s bungalow at 113 McCann Street in Benton, behind Benton Consolidated High School, just off Main Street.