One of St. Louis’ finest performers has left the building. Roland Johnson, the king of St. Louis blues and soul, has moved on to that great Stax studio in the sky.

When news of his passing hit the internet late Tuesday night, the tributes started rolling out. The charismatic vocalist had captured the hearts of generations of St. Louisans with his magnetic presence, his welcoming nature and his smooth, smooth voice. 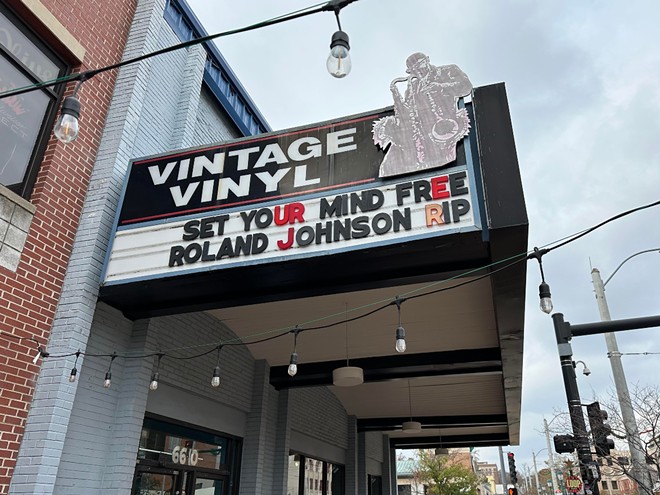 Mat Wilson
The marquee of Vintage Vinyl after Johnson's passing.

In a post to its fans on Facebook, the Funky Butt Brass Band shared this favorite memory: "He was a wild card and we never knew what was about to go down when he took the stage. Reminiscent of those legendary wrestlers when they were booked with young bucks for the first time. There’s no rehearsing how this match is gonna flow... That first time Roland joined Brasstravaganza [the band's big annual holiday show] he walked on stage, asked the audience if the band should pay him for being there, and launched into a random Foreigner or Steppenwolf tune with made up lyrics?? We were completely baffled and entertained at the same time. Roland had that crowd, and the band, in the palm of his hand the entire time."

St. Louis musician Joe Meyer shared his sadness, writing that Johnson was "one of the nicest people and one of the most gifted singers I’ve ever met, we lost a great one."

And musician and producer Paul Niehaus IV, whose Blue Lotus label worked frequently with Johnson, shared a photo of the late singer with a caption that quoted the Boxtops: "When I think about the good love you gave me, I cry like a baby."

Johnson was known internationally for his performing prowess, but here in St. Louis we were lucky to enjoy it regularly. From Beale on Broadway to the Venice Cafe to the Broadway Oyster Bar to Hammerstone’s to Off Broadway, Johnson worked the stages of St. Louis with grace and a captivating smile. Even people who had seen him perform hundreds of times were always overwhelmed by his charm, his talents and his fantastic fashions. 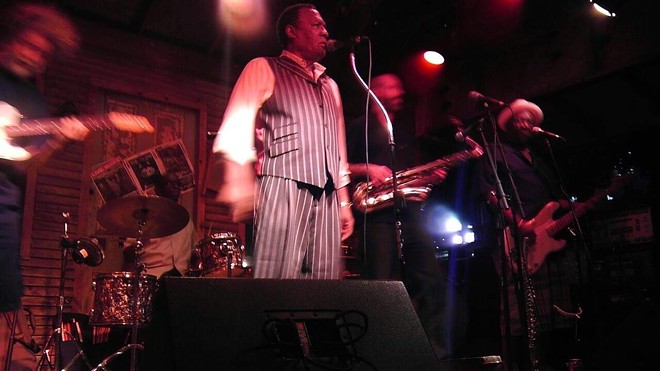 Dana Smith
Roland Johnson, seen here at Beale on Broadway in 2013, commanded a stage with ease.

Guitarist/vocalist Mat Wilson of Devil’s Elbow and Rum Drum Ramblers shared a weekly bill with Johnson at Beale On Broadway for at least two years, and Wilson is full of admiration for Johnson’s kindness, camaraderie and abilities.

“Roland Johnson was one of the last of a dying breed of true stage performers,” Wilson tells the RFT. “A complete powerhouse in every way, he commanded the room and drove his songs home every single time, leaving stardust in his path. We were so very lucky to have him here in St Louis. He was a beautiful person.” 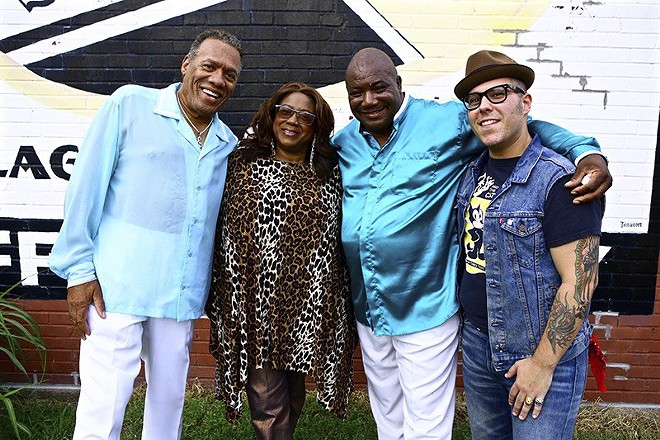 Tom "Papa" Ray, owner of Vintage Vinyl in the Delmar Loop and long-time host of the “Soul Selector” radio show on KDHX, was also in awe of Johnson’s captivating stage show and easy nature. 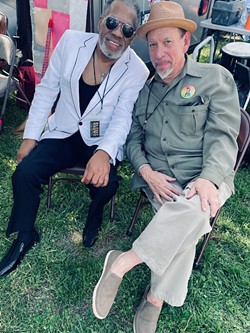 courtesy Tom Ray
Roland Johnson and Tom Ray
"As a vocalist, Roland not only had the gift of a strong commanding vocal range, he also had a way with the sort of subtle nuances the great soul singers use to give a lyric an added meaning, a deeper feeling,” Ray tells the RFT. “Whether it was one of his own originals or a Motown crowd pleaser, Roland Johnson was by far my favorite soul performer in our city, and he was my friend as well.”

Roland Johnson’s talents seemed endless, and his legacy will endure. Farewell to a true king of the St. Louis music scene. Give Kim Massie a hug from us.