For two hours pretty much on the dot, David Gray gave 'em what they came for last night as his Draw the Line world tour made its St. Louis stop.

"It's quite posh here," he said mid-set, gazing around the -- is there another word for it? -- posh Touhill Performing Arts Center. "This is a sweet listening room."

The crowd certainly thought so.

Dressed in a charcoal-hued suit, alternating between guitar (acoustic mostly) and piano and backed by a new four-piece band that features guitarist Neill MacColl, Gray drew heavily from last year's Draw the Line and its predecessor, Life in Slow Motion (2005). But just when it seemed he'd stick strictly to a latter-day repertoire and not revisit the likes of White Ladder, his 2001 pop-chart breakthrough, the Welshman changed tack.

"Sometimes you want to go all the way back to the beginning," he said as he adjusted his acoustic guitar for a solo number. "There was a guy going crazy in Kansas City [two nights earlier], shouting for this song.

Last night at the Touhill, though, he did.

And midway through he forgot the words. "I was younger then," he said. 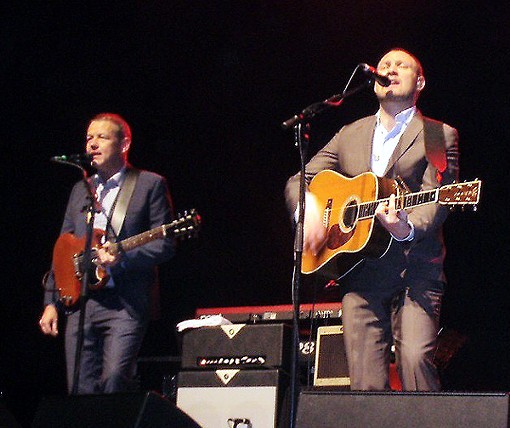 Funny, nobody seemed to mind.

"Shine" was followed by another well-aged selection, "Falling Free," and then yet another, "Flame Turns Blue."

The show opened with Gray and band silhouetted behind a sheer white curtain that obscured the entire stage, which dropped as the first verse kicked in. The first two songs, both from Draw the Line, were marred by a mix that muddied the vocals, but once that was corrected, the Touhill's acoustics were, well...posh.

Besides the blasts from Gray's past, highlights included "Sail Away," "Draw the Line" and an epic, ten-minute version of "Nemesis" that saw Gray veritably channeling Van Morrison and -- no, really -- Bob Dylan. An hour into the set, when Gray turned to a tech to switch guitars, the back of his suit jacket, soaked entirely through with sweat, was ample testimony to the fact that the man had come to testify.

Thanks to Rachel and Janet Burns for the pix.