The Guitar Heroes Took Their Annual Showcase to the Studio 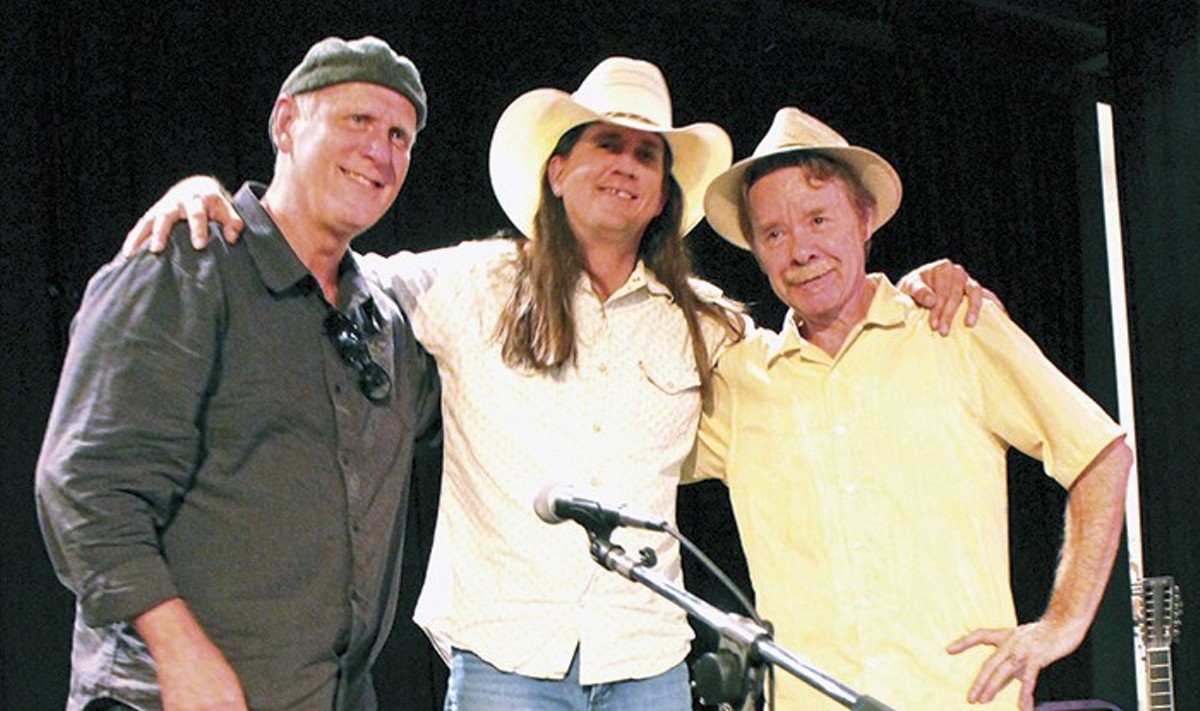 As the story goes, Brian Curran was about thirteen years old when his then-guitar teacher, Billy Barnett, suggested he catch Eric Johnson's performance at Mississippi Nights. Curran's parents brought him to the show, but they didn't want to stick around for the headliner. Still, the opener, Tom Hall, caused the teen musician's "jaw to drop to the floor," and he was happy enough to go home after the hometown favorite's set.

Listening to Curran spin that story, Dave Black unexpectedly notes that he was at the show, too. Small world.

That somewhat random connection was never uncovered until recently, when the three musicians were sitting around a table, forced to say nice things about one another. There are a lot of connections between them, though, and the trio plans to release a unique, collaborative CD at Focal Point early next month, Sorry - Concert Is Sold Out. The disc features an interesting blend of material based around an annual show that's come to be known as Guitar Heroes, a half-decade-running summertime performance that brings together three of the most talented guitarists in St. Louis. (Though it should be noted that all three are super sheepish about the "heroes" label, even if it applies.)

The genesis of the event, Curran says, came from another guitar teacher.

"Bobby Caldwell ... gave me the idea before he passed away," Curran explains. "He was into the finger-style stuff, and I do country blues and that sort of thing. He said, 'Me and you should do a show together, then get someone else to do something totally different.'"

But after Caldwell died, Curran would run with the idea with a pair of his other past teachers, Black and Hall. The three developed a unique approach to each summer's gig — a pattern mimicked on their upcoming Sorry release. Each player offers an original song, played solo. The three then play in alternating duos, with an eventual three-man collaboration. After an intermission, the process repeats itself during the second set.

Black says the Focal Point is the perfect location for their annual performance. "It's a very intimate setting. About 120-or-so capacity. People can hear everything and there's no outside noise. Very friendly, with people there to listen. What's not to like about that?"

Hall says, "It's the right-sized room: not too many, not too few."

The trio has been in the studio, chopping away at recordings that they all say are extremely live — sessions have featured plenty of first-take successes and only a few overdubs. Still, they wanted to pull from some of the original source material, too, moments caught live at the Focal Point.

For the studio sessions, they chose to work with longtime producer and recording engineer David Torretta, who's also touching up the live cuts.

Torretta is "a dream to work with," Black says. "So laid-back, yet he contributes a lot. He's a real wizard at finding ways to deal with issues of unwanted sound, elements that need to be rectified. He's very quick, very assertive."

Combining the live tracks and the new, studio work, Curran hopes that the disc allows the trio — relentless live players, all — the opportunity to capture some new listeners.

"With these shows, there's been a real intermingling of everybody's core group," Curran says. "I think that'll open us up to new people. Dave's fans will pick up a CD; Tom's fans will, too. The main thing, really, is to thank the supporters we've had when doing this show. ... I think they're going to dig it and not just get a recorded, live performance. The disc is a good way to say 'thanks' to those people who've been following us all over town, at shows in coffeehouses, bars, restaurants."

Each of the three keeps a busy live schedule. Hall's mostly gigging solo. Black works in a variety of duos and combos. Curran's got a group, the Dust Covers, along with solo and duo jobs. But with this blend, the three are able to tap into something kind of deep, whether it be Curran's former teacher/student relationship with his partners or Black and Hall's 35-years-and-counting musical brotherhood.

Hall, for example, says of Black, "He's the favorite guitar player that I've ever played with, no doubt about that. I love playing with him. And I have played with him, more than I ever could've imagined, in all kinds of situations, in so many different gigs over the years. He's always inspired me to really play when I'm onstage."

On the other hand, he says to laughter, "I have nothing to say about Brian. Just kidding. Brian put the scare into me a while back, because he was picking it all up too fast, y'know, back when I gave him some lessons for a brief period of time. I'm honored that he asks me to do this thing every year."

"Musically, it's so fulfilling," Black explains. "There's such diversity with this, bringing together the collective backgrounds of us, our musical styles. There are some projects where you feel musical fulfillment; you can really sink your teeth into it, but there's not necessarily a personal connection. Here, I'm getting the best of both worlds."

And Curran, the organizer, says, "I've thought, 'I can't believe I'm sitting in a studio with Tom Hall and Dave Black.' With this, everyone's doing a little something different, something they don't normally do, to accommodate the other players. I never thought that would've happened. It's a real honor for me.

"For me, personally, I'll cherish this more than any recording I've done so far."