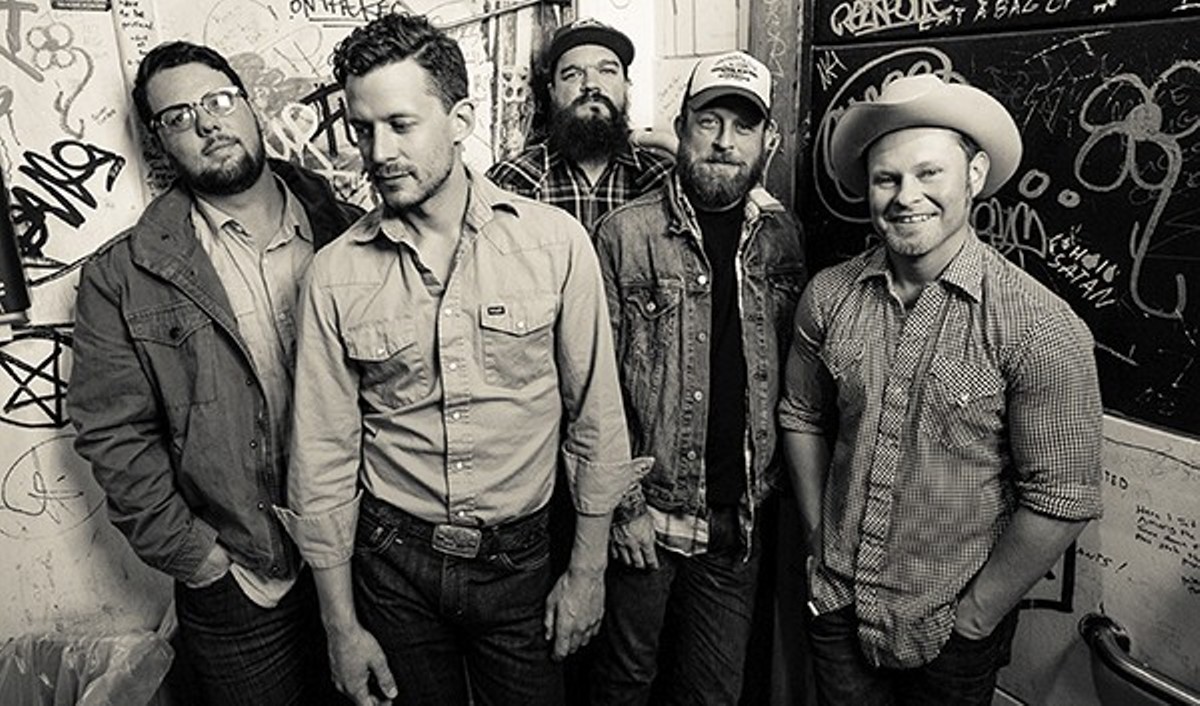 Anthony Weiner walks into a bar, long before exhibiting the sort of behavior that would land him in prison. The bar's in D.C.'s Logan Circle, back before it gentrified.

Weiner's wet; it's raining outside. He tosses his tie over his left shoulder and orders a bourbon on the rocks. He doesn't check his Twitter feed, because Twitter hasn't been invented yet. He scratches his nuts, but refrains from fondling them. What would be the point?

The point is, Dierks Bentley walks into the same bar: the New Vegas Lounge, which is thousands of miles from Vegas. He orders a Bud, because to order anything other than a Bud wouldn't be in keeping with Bentley's denim-jacket-and-stubble image. (Never mind that he's from Arizona.) He catches Weiner's eye. Weiner's wiener catches his eye. They make small talk until the talk turns long. Bentley's got a hotel room. Weiner checks in.

In the newly invented realm of Americana erotica, this would be how Evan Felker, the lead singer of the Turnpike Troubadours, came into being. After all, he looks like what would result if the aforementioned mismatched pair got to gettin' down. But men have no means of giving birth, and Oklahoma probably wouldn't let them anyhow.

Some 3,000 people live in Okemah, Oklahoma, where Felker resides. It's also the birthplace of Woody Guthrie. Felker's one-time bandmate and still-frequent collaborator, singer-songwriter John Fullbright, surmises that Felker was likely one of the last babies to be born at Okemah's hospital. Fullbright had to settle for sprouting forth from his mother's loins in Shawnee.

"One of the biggest misnomers about eastern Oklahoma is that it's flat," says Troubadours bassist and co-writer R.C. Edwards. "We live on the edge of the Ozarks — creeks and hills and trees."

Aesthetically, Edwards is sort of the anti-Felker. He's round where Evan is slim, hirsute where Evan is shorn. If Edwards wears a hunting cap on stage, well, shit, that's probably 'cause he just went hunting. Food roams the fields, y'know — everywhere, anytime.

The Troubadours hail from the Sooner State, but rarely leaves the road. The group is revered as one of America's great live bands and following its current run of shows has been tapped as an opening act on the 2018 tour for no less than Miranda Lambert.

"She's kind of rotating a lot of pretty neat bands that you wouldn't think to open for Miranda Lambert," says Edwards. "If you had to pick a mainstream artist, she's one who'd be pretty cool in our book. There's definitely been lots of gravitation toward more roots and traditional Americana stuff from the big-time country folks out of Nashville."

Remember when Jason Isbell left the Drive-By Truckers? There was acrimony at the time of the split, although it's since been smoothed over. Well, Fullbright was once a Troubadour, back around the time he was getting fitted for a prom tux.

Fullbright was never fully committed to the Troubadours, signaling from the get-go that he wanted to do his own singer-songwriter thing. Yet the pianist still shows up on every one of the group's albums, including its shimmering newbie, October's A Long Way From Your Heart. That's even though, as Fullbright quips, Felker has "strangely anti-keyboard" tendencies.

The Troubadours' prior albums have been a blast, mirroring the group's live shows. But the new LP is a whole lot slicker, a dynamic that can really screw with a killer live band (see: the Grateful Dead or Phish).

Thankfully, the enhanced production works on A Long Way From Your Heart.

"I think a lot of that is this was our first time using a producer instead of us just winging it," says Edwards. "He [Ryan Hewitt] really pushed us to get the best out of all our writing and arranging and playing. The arrangements are the big difference — they're just better than we've typically had before."

But for real, nothing beats the Troubadours' live vibe. One time, when they played in Mizzou's backyard, they were just some of the guys.

"Columbia's always been a fun town," says Edwards. "We were trying to watch the Sooners game and ended up going to a party-pad apartment with a bunch of fans before the show. It was kind of like reliving our college days."

Who knows what future Americana superstars might have been conceived that night?