Send a News Tip
St. Louis Mayor Francis Slay announced his new legislative agenda recently on -- where else? -- his blog.

The tech-savvy mayor's wish list includes many of his perennial goals: additional charter schools, more local control of the police department and the retention of state tax credits for development.

Curiously, the mayor also wants "support for daily newspapers" -- an agenda item that seems to contradict his routine barbs (here, here and here) aimed at St. Louis' only daily paper.

Most troubling, though, is what Slay's '09 legislative agenda lacks. Namely, where is his initiative to ban public smoking?


Missouri is one of just sixteen states that doesn't have any kind of state-wide ban on public smoking.

I realize Slay may not have the pull in rural Missouri to initiate a state-wide ban, but it's high time he pushes for such an ordinance here in St. Louis. If that means working with state legislators, so be it.

An alternative would be for Slay and St. Louis County Executive Charlie Dooley to work together to push simultaneously for laws prohibiting smoking in bars and restaurants in the city and the county. 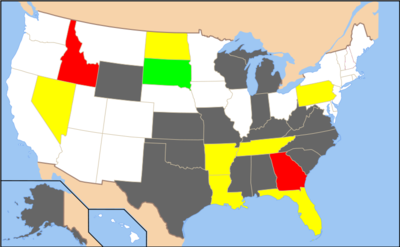 States with no state-wide ban on public smoking appear in gray.