Back-In Angle Parking Is in St. Louis to Stay. We'd Better Get Used to It 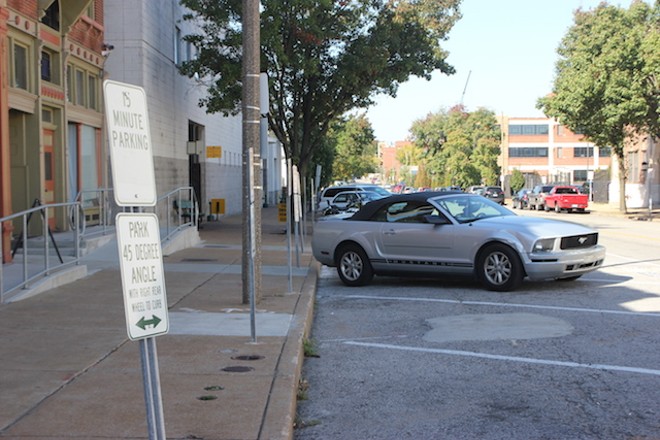 PHOTO BY SARAH FENSKE
In the last two and a half years, the city of St. Louis has been faced with an growing epidemic — a phenomenon terrorizing drivers from St. Louis Hills to downtown, from Shaw to the Central West End. The epidemic has transformed once-ordinary errands into inducers of anxiety, forcing commuters to confront their core weaknesses ... or drive blocks out of their way to find an alternative.

We're talking, of course, about back-in angle parking: spots on the street requiring drivers to back in so the trunk faces the curb. The city has added 500 such spots in recent years, says Deanna Venker, the city's traffic commissioner.

Suffice it to say, it has not been without complaint. "We've had some heartache on it," Venker acknowledges.

The change stems from an overall move to replace parallel parking on city streets with angled spaces. Businesses like the angles because they maximize volume, allowing for 30 percent more vehicles within a given footprint. Neighborhood groups tend to like them for a different reason — they assist with "road diets" critical to traffic calming.

Because St. Louis has so many wide streets — and comparatively few cars using them — angles are a particularly good fit. "We do have so much extra space," Venker says. "And when there's lots of space, we can try and create room for more cars to park. We also like to use angled parking as a way to get traffic calming out of it as well."

Angled parking alone wouldn't be getting blowback. (Many drivers, of course, prefer it to parallel parking.) The back-in feature is a different story. Confronted with a maneuver that requires them to back in, some drivers simply flee. Others ignore the signs and pull in nose-first. They do so, however, at their own peril. The city can — and will — ticket you for facing the wrong way. (Yes, your humble correspondent writes from personal experience.)

Still others bitch. The Lafayette Square neighborhood, for one, briefly tried back-in parking in the square mile around the park, but outcry persuaded the city to reverse course. Now drivers are again allowed to pull in.

But other neighborhoods, Venker says, are unlikely to get such a reprieve. She notes that Lafayette Square was a situation where the spaces around the park had always been angles; in cases like that, the city is willing to let an area be "grandfathered" in. Any new angled spots being added, she says, will be back-in.

The city believes it's a matter of best practices.

"We rely on the folks who've done the research," Venker says. "And they've found there are reasons to do it this way."

Indeed, Venker lists quite a few. It's less dangerous to back into a space than to back out of it — other drivers see you positioned there in the road backing in and are less likely to hit you than someone backing their way out of a spot. It's also safer for children getting of the car, since car doors open at an angle that keeps them from the traffic rather than pushing them into it, as with front-in angles.

And finally, it's better for loading and unloading. If you're getting things out of your trunk, you're able to stand safely on the sidewalk, not out there on the edge of the street where you might clipped, Venker notes.

The reasoning is sound. The city is committed. And so if you're a bad driver — or you're a good driver who's simply nervous in reverse — your best bet is to pass through the stages of grief with speed and get to acceptance. As Venker notes, the only way you're going to figure out how to do it is to, well, do it.

"Pick a quiet street," Venker urges, "and give it a shot."