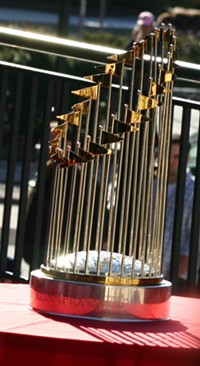 We'll take that now, kthnx.
Now that the venerable New York Times has published a report -- out today -- that Manny Ramirez and David Ortiz tested positive for 'roids in 2003, the entire roster of the 2004 St. Louis Cardinals, its management and fans are politely asking for the 2004 World Series trophy back. At least, that's what they should be saying.

Baseball first tested for steroids in 2003, and the results from that season were supposed to remain anonymous. But for reasons that have never been made clear, the results were never destroyed and the first batch of positives has come to be known among fans and people in baseball as "the list." The information was later seized by federal agents investigating the distribution of performance-enhancing drugs to professional athletes, and the test results remain the subject of litigation between the baseball players union and the government.

In case you forgot how Man-Ram and Big Papi helped dismantle the Cardinals' chances at a World Series championship that year:

Rameriz batted .412 and got on base half the time he had a chance during the Boston Red Sox's sweep of the St. Louis Cardinals back in 2004.

Ortiz batted .308 and had an on-base percentage of .471 against what was roundly considered one of the best Cardinal squads of all time, a team that went 105-57 in the regular season.

The fact that the Jimmy Fallon tour de force Fever Pitch was being filmed in Busch Stadium during the Bo' Sox's championship run was even worse. In fact, this whole "they-were-really-cheating-but-no-one-was-supposed-to-find-out" story is churning up a lot of bad memories about 2004.