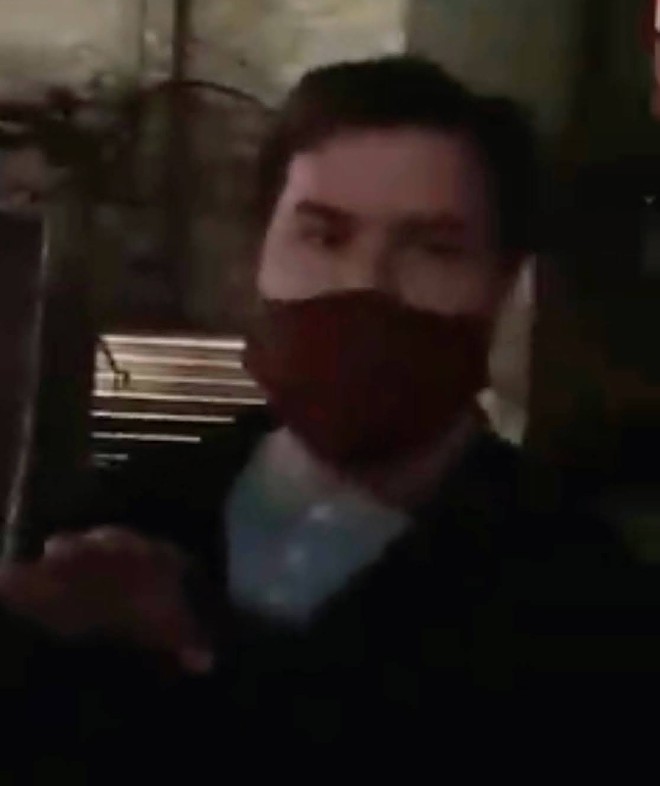 
A white night watchman at Concordia Seminary has been placed on administrative leave after he was recorded confronting and interrogating Black children as they walked across its Clayton campus.

On Monday evening, the boys were on their way to meet up with family of friends to watch the solstice-night alignment of planets when the watchman approached, fathers of three of the boys tell the Riverfront Times. He accused the kids of being "suspicious" and up to "no good," even though he'd seen them do nothing more than walk. One of the boys, age thirteen, began filming the encounter on an iPhone.

"Here's the problem," the masked watchman says. "It's after dark, and we get a lot of people coming up here to do no good."

"What you know is that they're all children," McCune says.

But that's not the way the watchmen treated them. In the video, the man runs through a familiar set of demands, insinuations and accusations that have become hallmarks of videos of white people confronting people of color for doing mundane things.

Concordia has long made its campus open to the public to walk and enjoy. The boys tried to explain that they were just cutting through to meet people and to see the planets.

"You're here walking around — I bet," the watchman says sarcastically in the video.

The boys kept walking away, but the man followed.

"Excuse me," he says at one point. "Stop filming and start answering some questions for me."

One boy replies, "We don't have to. We're going to walk and not talk."

The man says, "Yes, you do, because if you don't, I'm going to assume you're here for no good."

Two of Jason Wilson's boys were in the group. They are ten and thirteen, and the family lives about a block away from the Clayton campus. Wilson, the owner of Northwest Coffee Roasting Company a member the Clayton schools Board of Education, says he and his wife, Washington University Associate Professor Shanti Parikh, speak to their children on a near-daily basis about the way they'll be perceived by some people once they walk out the family's door. The watchman's actions were frustratingly familiar.

"The things he was saying were so classic," Wilson says. "That's what made it so unbelievable."

For several minutes, 3:08 of which are in a video that Wilson posted on Facebook, the man followed the boys as they walked through campus. The boys spoke politely as they tried to separate themselves, which makes Wilson proud of them if no less infuriated with the watchman. In the video, one of the boys lets the man know what he's doing is wrong.

The man replies, "Of course it's not because you're Black. Dear God. That's the most ridiculous thing I've ever heard."

"That's not ridiculous, man," one of the kids says.

"At any rate," the watchman says, "you have a white friend here, too, so clearly this has nothing to do with race."


But McCune says the man's actions are clear, and they fall into an old pattern of assuming the worst of Black people.

"I hate to be academic about it, but it's emotional and academic in the sense that it's all connected," he says. "The idea of 'up to no good' has been a historical way of discussing Black people as criminals, and children. Children playing — up to no good. Children walking through a seminary of all places — up to no good."

The interrogation of the boys only ended when the woman whom the children were walking to meet doubled back to check on them. She is white, and Wilson and McCune say she told the watchman to stop harassing the kids. The man didn't apologize despite the evidence the boys were telling the truth, Wilson says, but he did finally walk away.

That evening, the kids returned home and told their parents what happened.

Wilson and McCune say their sons appear to be doing OK, but they know from experience that the encounter will leave a psychological mark. Wilson, who was stopped twice by police while campaigning for school board in Clayton neighborhoods, says he remembers every such encounter from his life. He knows the boys will, too.

"There's a way in which you talk to Black kids, you look suspicious. If you don't tell me what you're doing I'm going to assume the worst of you," he says, adding that it can be worse than a physical injury. "Psychological trauma is way more damaging, long lasting."

McCune says he woke up furious this morning. The kids in the group grew up playing on college campuses, and Concordia's grounds had felt like just another part of the neighborhood. But he sees a viral racism and a vigilante mentality burrowing into the country. The watchman looked at his son and his son's young friends and saw criminals, he says. It's especially stunning that it happened on the campus of a Christian institution, he says.

Asked about the incident, Concordia released the following statement:


The Seminary’s senior leadership team has become aware of an interaction between a member of the Seminary’s campus safety team and three youths who were on campus on the evening of Dec. 21, 2020. Since establishing its campus in Clayton nearly a century ago, Concordia Seminary has always tried to be a good neighbor to those who live in the surrounding community and we continue to welcome all those who visit campus to enjoy our parklike grounds, to walk our paths and to enjoy the beauty of God’s creation. The safety of everyone who lives and/or works on campus as well as that of those who visit our campus is among our highest priorities. We do not condone the conduct of the campus safety watchman and he has been placed on administrative leave. We are actively looking into the incident and are committed to taking whatever additional appropriate actions are necessary.

Video of the watchman confronting the children has begun to spread, followed by messages of support for the boys and their families. Wilson says he is reinforcing the message to his sons that they did the right thing and handled themselves well.

"At the end of the day," he says, "I still have to worry about these little dudes walking through the neighborhood being terrorized."