Crestwood Schnucks Getting Food Hall and Other Upgrades 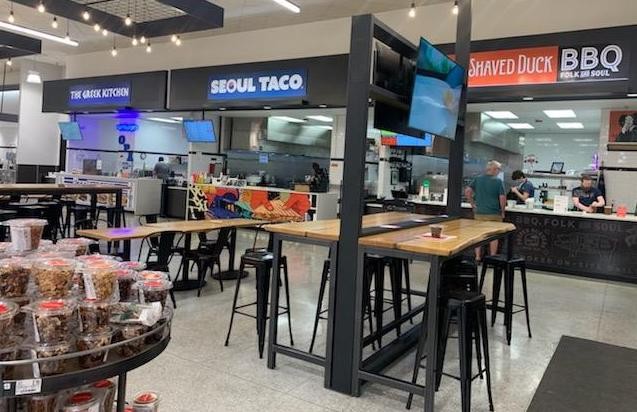 The Crestwood Schnucks is getting a makeover similar to the 2021 remodel at the Kirkwood Schnucks. Upgrades will include a new food hall with three restaurant vendors, a dining area and a kombucha fountain. Construction is expected to be completed in November 2023.

While food vendors aren't yet announced, local restaurants The Greek Kitchen, Seoul Taco and The Shaved Duck BBQ occupy the Kirkwood food hall. Schnucks has long supported St. Louis-area restaurants and businesses by carrying local products such as Imo's pizza doughs, Volpi charcuterie, salads from Crushed Red and Seoul Taco burritos, among other items. So it is likely the vendors will also be local restaurants.

One advantage of opening a satellite location in Schnucks, according to proprietors who spoke to St. Louis Magazine when the Kirkwood store opened in September 2021, is that people can pick up to-go orders without overwhelming the restaurants themselves.

Scott Shipley, Third Ward alderman for Crestwood, shared the news about the updates on his website. 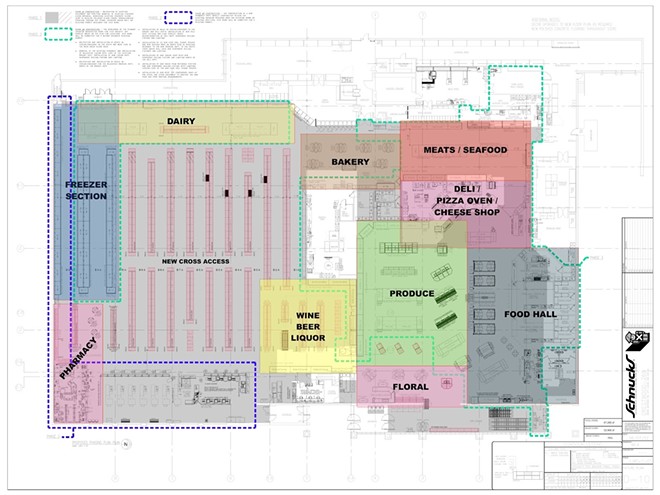 SCOTT SHIPLEY/SCHNUCKS
The new floor plan for the Crestwood Schnucks shows that the store will be adding a food hall.

In addition to adding a food hall, other grocery departments will move, and the store will start to offer hot pizza alongside its rotisserie chicken and wings. A new Dierberg's will soon be opening up across the street, but a Schnuck's spokesperson wouldn't confirm that was the reason for the updates.

"Schnucks has served Crestwood since 1964," Schnucks Spokesperson Paul Simon says, noting that the current store was completed in 1995. "As a longtime partner of the Crestwood community, we're excited about what's ahead, and we look forward to sharing more information with our customers soon."

In comments to Shipley's post, some people complained that the Kirkwood Schnucks has fewer grocery items after its renovation.

Schnucks rebuffed the idea. "At 67,000 square feet, the Crestwood store is relatively large when compared to other Schnucks stores," Simon says. "This allows us to introduce new concepts while continuing to focus on our customers’ favorite products."