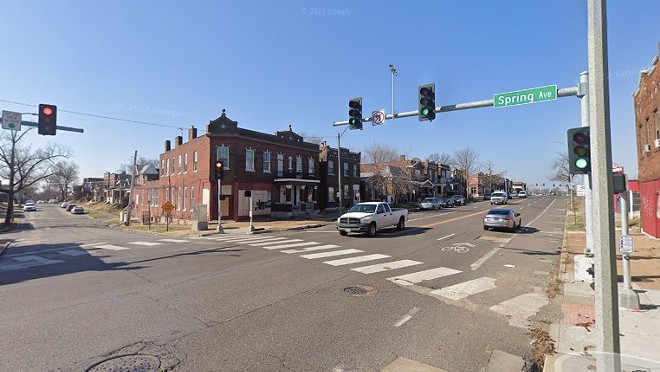 Google Maps
At the center of the two-year lag lies failures of communication between St. Louis Mayor Tishaura Jones' office and the Streets, Traffic and Refuse Committee.
The budget for an infrastructure improvement fund critical for the city’s street department and forestry division has not been updated in two years — a delay blocking millions in funding for employee pay, sidewalks, road repairs and more.

The fund in question, St. Louis Works, uses a percentage of utility and motor vehicle taxes to fix sidewalks, repair roads, provide equipment upgrades and cover a select few city employees’ pay. No updated budget for STL Works had been passed on to the Board of Aldermen for two years, until today.

At the center of the two-year lag lies failures of communication between St. Louis Mayor Tishaura Jones' office and the Streets, Traffic and Refuse Committee. Both parties blame the other for the delay.

Sharon Tyus, Ward 1 alderwoman and chair of the streets committee, blames the mayor’s office. She says it’s “pretty simple” why an STL Works bill has not been introduced in two years — none of the people responsible for providing an STL Works budget when hired “had any experience or knowledge about their respective jobs or how to navigate City Hall.”

Tyus specifically pointed fingers at Executive Director of Operations Nancy Cross and Director of Streets Betherny Williams — who, according to Tyus, failed for several months to answer her questions about a combined 2021 and 2022 budget Williams proposed in March. The mayor appointed Williams and Cross last year.

“I do not sponsor bills in front of a committee unless I am fully prepared to answer all potential questions from committee members,” Tyus tells the Riverfront Times. “I am also not in the habit of chasing the person down who wants me to sponsor a bill.”

“Our administration has full confidence in Director Williams in her work on this issue and her efforts to improve reliability of city services,” Desideri said in a statement.

Emails provided to the RFT show Williams and Board of Alderman Liaison Kevin Bailey reached out to Tyus at least four times via email between March and November. In November, Williams wrote she tried to call Tyus but received no answer and could not leave a voicemail as the alderwoman’s voicemail was full. Williams also appeared in at least three street committee hearings this year, according to Desideri. 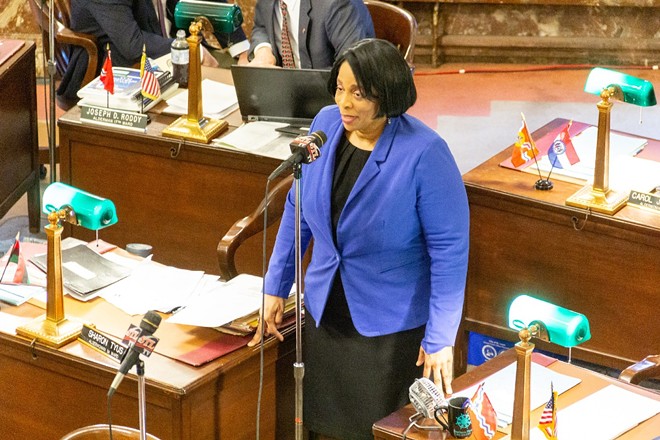 Ryan Gines
Alderwoman Sharon Tyus
Tyus says she herself tried multiple times to speak to Williams and her calls went unanswered as well.

In a November 9 letter to Tyus, Cross said the failure to pass on a new budget to the Board of Aldermen blocked $9.8 million in funding.

“This two-year delay has forced key city divisions and departments to reallocate funding for employee pay while stalling service and delaying needed upgrades to the city’s fleet and other equipment,” Cross wrote.

When asked to explain how the STL Works stall could block $9.8 million in funding as the mayor’s office claimed, Tyus replied: “They’re stupid.”

In an email Thursday, Tyus said Cross and the mayor’s office should be “really embarrassed” for their incompetence. Streets Commissioner Kent Flake said under oath at a streets committee hearing this week that Tyus had not received last year’s STL Works budget because he was busy. Flake also testified that Tyus was not the cause of the hold up.

“I have covered up for the mayor’s office too many times [and] have quietly cleaned up their many mistakes,” Tyus tells the RFT. “I have told that office on many occasions to just come clean with their mistakes instead of trying to push the blame onto someone else.”

“Their duplicitous actions make me ashamed that I have been the only Black alderperson who has supported Tishaura for both treasurer and mayor,” Tyus said.

Williams and Tyus ultimately had a short conversation on December 1. Afterward, Tyus said she instructed the Board of Aldermen clerk to introduce an STL Works board bill with her as a sponsor for the 2022 budget on Tuesday.

The bill had its first reading at today’s Board of Aldermen meeting.