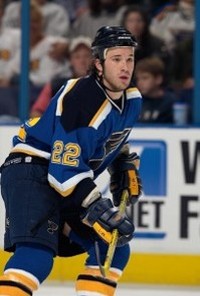 Danton playing for the 2003-2004 St. Louis Blues.
Former Blues player Mike Danton is making a new life for himself a long way from his past troubles in St. Louis.

Last week the 30-year-old Danton signed a contract to play minor-league hockey in Sweden for IFK Ore, a third-tier team that plays in a 700-person stadium about two hours north of Stockholm.

"Of course we have discussed his past, but you can't judge someone for life," the team's general manager, Jan Nielsen, told Swedish media. "What's done is done, and now he seems eager to get away from North America and find the calm here."

Danton was paroled in October 2009 after serving five years in prison for trying to hire a hit man in St. Louis in 2004 to kill a guest in his Brentwood condo. Prosecutors believe the target was his then agent, David Frost. Danton, meanwhile, contends it was his estranged father. Since his release from prison, Danton went on to attend college in his native Canada where he played for St. Mary's University in Nova Scotia.