Hartmann: Why January 6 Means So Much to Eric Greitens 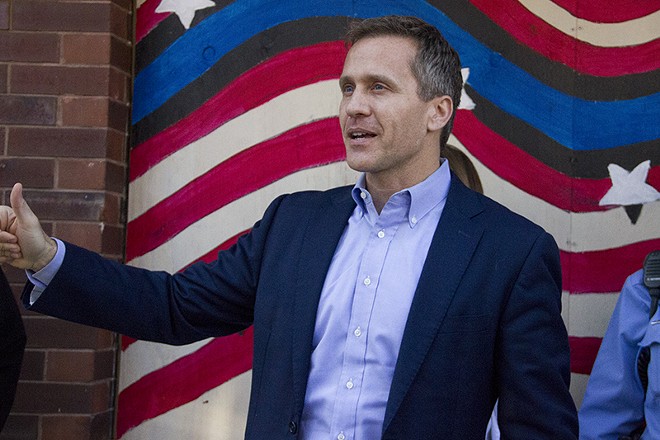 Eric Greitens must feel like he’s in political heaven right now: The January 6 insurrection at the U.S. Capitol has taken center stage again.

For most Americans – Republicans included – January 6 will be remembered as one of the darkest days in the nation’s history. But for Missouri’s disgraced ex-governor, it was not about darkness at all.

It was about the light Greitens could see after crawling out from under his rock.

Greitens had been left for dead politically after resigning from office. But he had found an opening for his unlikely political resurrection when, on November 3, 2020,  then-President Donald Trump lost to Joe Biden. With his magnetic attraction to sleaze, Greitens was among the first to deny reality.

At the time, Greitens had just launched a new show called Actionable Intelligence with Eric Greitens. It was broadcast on the fringe network known as Real America’s Voice, the platform for Trump vampire Steve Bannon among others.

Just two days after Biden’s victory in the U.S. presidential election, Greitens interviewed erstwhile Trump attorney Jenna Ellis for the 10th episode of his show. Ellis, a failed traffic court attorney, proclaimed “we have declared victory in Pennsylvania,” among other “alternative facts.”

The next day, Greitens doubled down on what was to become the Big Lie in an interview with right-wing journalist John Solomon, whose “Just the News” propaganda organization hosted Greitens’ show. And it did not stop there.

Greitens brought on famous shirt-tucker Rudy Giuliani, who declared he’s “never seen an election with half this much evidence of fraud.” Former Trump adviser Steve Cortes assured Greitens and his audience that “it is statistically improbable to the point of impossible that Trump lost the election.”

But it wasn’t until the January 6, 2021, riot at the U.S. Capitol that Greitens must have realized he hit political pay dirt. In real time, Greitens described January 6 as “a big and in many ways unfortunate [day].”

That was the closest he came to criticizing the riot. And Greitens went on to interview former St. Louisan and member of the Trump campaign’s media advisory board Gina Loudon, who was previewing her show that was to follow. After offering her firsthand reporting that antifa was much to blame for the Capitol riot — which “might have included some Trump supporters” — Loudon said, “What I saw on the ground were tear-gas bombs exploding, people walking away with their faces red and tears flowing. I’ve never witnessed our government opposing patriots. That was something I never thought I’d see in our lifetime.”

Greitens agreed, and with good reason. Within 72 hours of the election, he had weaseled himself onto the far-right national stage. He was on his way.

Within two months, Greitens ditched the show and announced his candidacy for the U.S. Senate seat being vacated by Senator Roy Blunt. The race quickly devolved into a wild six-way scramble — between Greitens, state Attorney General Eric Schmitt, U.S. Representative Vicky Hartzler (R-Harrisonville), St. Louis attorney Mark McCloskey, U.S. Representative Billy Long and state Senate President Pro Tem Dave Schatz — for the title of “Who Is The Trumpiest of Them All?”

The stars could not have aligned better for Greitens. Republicans were and are aghast at their party running as its Senate candidate the very guy they had exorcised as governor in 2018.

Their concern is that they might get stuck with a latter-day Todd Akin: somehow not quite creepy enough to get rejected by Republican primary voters, but a liability nonetheless on the November ballot. That happened to them just a decade ago in 2012.

The Republicans’ dilemma isn’t helped by the apparent fact that being a sexual predator and alleged spousal (and child) abuser may be just fine with the Trump base in 2022. And the more that the field became populated by anyone-but-Greitens candidates, the more the math favored Greitens.

As the primary race turns for home in the final seven weeks, most polls show Greitens — receiving about 23 to 26 percent of the vote — clinging to a modest lead over the only challengers who have gained traction: Hartzler and the actor formerly known as state Attorney General Eric Schmitt. Those two seem to be swapping second- and third-place spots.

Polling is not to be trusted these days. But there is one unknown variable that cannot be denied: An endorsement by Trump of one of these three candidates would likely be game-set-match for the other two.

Missouri is one of the Trumpiest states in the nation. The wannabe autocrat’s seal of approval would have enormous impact in the Republican primary, regardless of what any of us on the outside might wish to believe.

It is fair to say that the top three candidates currently reside within the Margin of Trump. So the big question is whether the outcome of Missouri’s GOP primary intersects with Trump’s self-interest and narcissism.

My Republican sources believe he will endorse, and I have no reason to doubt it. The race has emerged as one of the nation’s most interesting to watch, and Trump loves ratings.

This is where Greitens may prove to benefit from glomming on to the Big Lie and to the effort by Republicans to minimize and then to wish away the January 6 insurrection. There’s a decent chance that might tip the scales for him. Greitens has been able to ensconce himself among some of the most revered bottom-feeders of MAGA world. He apparently has emerged as a personal favorite of Bannon, fittingly enough, as well as the likes of Solomon, Ellis and Nazi-lookalike Sebastian Gorka.

That’s priceless for a Republican in 2022. And its value for Trump sycophants will rise in direct proportion to the negative impact that the House select committee’s public hearings on January 6 might have on Trump.

Past loyalty means nothing to Trump. But what does matter is a candidate’s willingness to throw down with force in promoting the Big Lie that the election was stolen in 2020.

All the Republican candidates for this U.S. Senate seat in Missouri know the election was not stolen. As such, the final weeks of mouth-to-mouth combat may come down to who can lie the most convincingly on behalf of Trump.

It’s hard to imagine a more formidable opponent in a battle of lies than Greitens. But Hartzler has done an impressive job of hiding the utter disgust any Church Lady must have with Trump’s world-class sleaziness.

Hartzler’s disingenuousness was illustrated by her before-and-after tweets regarding the January 6 riot. She went from chastising protesters for “behavior one would expect to witness during a third world coup” on January 6 to deciding last week that the hearings are merely “an illegitimate committee weaponized to solely attack former President Trump.”

At least Hartzler is flexible.

As for Schmitt, his awkwardness in groveling at Trump’s feet is hard to watch even for those of us who can no longer stand the guy. Schmitt seems to be pinning his hopes on some pathetic renditions of Trump’s social media Tourette syndrome.

Also not likely in his favor, Schmitt has the endorsement of Senator Ted Cruz (R-Texas), hardly a real Trump pal. Trump and Cruz never seem to back the same candidate in a closely contested major race.

It’s difficult to predict what Trump will do — or if he’ll sit it out — but for now it seems likely that he’ll endorse either Greitens or Hartzler. The latter does have the passionate backing of Senator Josh Hawley, one of Trump’s preferred insurrectionists.

But don’t bet against Greitens getting the orange thumbs-up. And if he does, or if he wins because Trump sits it out, there will be one group deserving Greitens’ gratitude more than any other.

It would be those “patriots” who tried to overthrow American democracy on January 6.