Employees tell the RFT they have seen their hours drop as a result of their unionization efforts. The shortened shifts have led to fewer workers on the floor, causing longer wait times for customers and overwhelmed workers.

It has made shifts a “disaster,” says barista Jon Gamache who says one worker fainted on the job and others have quit.

The breaking point came last Friday when waves of people filed into the Ladue Starbucks. With school back in session and pumpkin spice season in effect, the store saw nearly 130 customers in a half hour — their highest in months, says Gamache.

Shortly after the Friday morning rush, the frustrated workers scheduled the one-day strike for Saturday. VIA JON GAMACHE
The Ladue store where workers held a one-day strike on Saturday was closed.

Another worker involved in the unionization efforts, Bradley Rohlf, says they scheduled Saturday’s strike in an attempt to “demand recognition.”

“Our hopes with that was to give a show of force and give a show of seriousness that we can come together and make changes — and you need to pay attention to us and listen to us,” Rohlf says.

At 7:30 a.m. on Saturday with the music still playing, customers in the store and drinks on the counter, about eight employees walked out of the store, forcing it to close. A video of them leaving the Starbucks has reached nearly 1.7 million views on TikTok.


The workers spent the day protesting in front of the store and on Clayton Road, holding signs that read “hour cuts = wage theft” and “skeleton crews scare away customers.” The strike lasted until 7 p.m.

A Starbucks spokesperson told RFT that “we respect our partners' right to strike,” but the allegations of “retaliation are categorically false.”

The spokesperson said it is normal for workers to see their hours drop depending on the season, attributing it to “market forecast.”

“With summer coming to an end, our hours decline a little bit, which happens every year and nothing out of the ordinary at all,” the spokesperson said. “...We schedule to what we believe the store needs based on customer behaviors. It may mean a change to the hours available, but to say that we’re cutting hours would not be accurate.”

In June, the Ladue Starbucks at Lindbergh and Clayton became the first of five local-area Starbucks to unionize in a resounding 12-3 victory.

But after their unionization efforts began, the store changed, say Rohlf and Gamache. Gamache, for example, saw his hours cut nearly in half. He asked not to open the store — only to be scheduled to open the store multiple times a week. He says the Starbucks location fell from an average of 15 workers on the floor to under 10.

Rohlf, a shift supervisor, also had his hours cut. He says that before the union election, the staff worked a total of 600 labor hours a week. Now they work around 520.

“A year ago, we weren't having these problems because we were properly staffed and, of course, there wasn't any talk about union stuff a year ago,” Rohlf says. “But it's clear that the company has been intentionally understaffing our store to once again try to push out employees.”

VIA JON GAMACHE
Starbucks workers held signs and stood near their Ladue store during Saturday's strike.

This is not the first time a St. Louis-area Starbucks has accused the company of retaliation. In June, workers at a store in Bridgeton, where the unionization vote failed, contested the results with the National Labor Relations Board after workers had their hours cuts, found anti-union literature in their tip envelopes and were subject to multiple captive audience meetings. 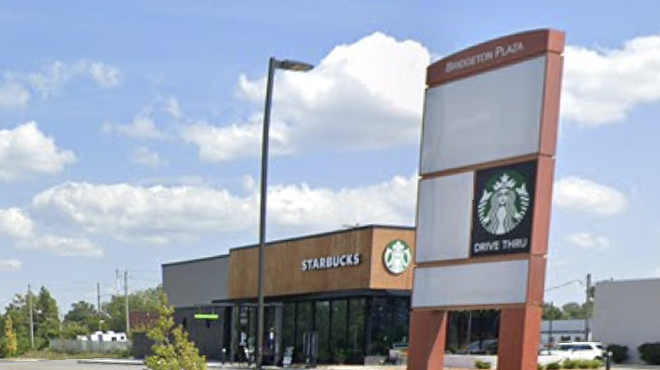 The strike in Ladue comes as Starbucks stores nationwide, represented by Workers United, are continuing to unionize –– but struggling to start the negotiation process. Although about 240 stores have unionized in the United States, Starbucks has only begun bargaining with three. The Ladue Starbucks has not started the bargaining process.

As a result, Starbucks employees around the country have resorted to striking. One location in Boston, where they also accused the company of hour cuts, went on strike for 64 days. Others have opted for one-day strikes.

In a statement released Monday, Starbucks said it hopes to start bargaining with each store individually next month, including the Ladue store.

But Gamache says if nothing changes, the strike might not be their final action.

“It’s definitely not going to be the last thing we do," Gamache says, "if they don’t respond the way we want them to."

This post has been updated to include comment from a Starbucks spokesperson and the amount of unionized Starbucks in the area.