Send a News Tip
No need to panic. It's no one related to Llewellyn's the popular local chain of Welsh pubs. (At least I hope not.)
No, the deceased is Sir Dai Llewellyn, legendary British playboy and a dead ringer for Thurston Howell III from Gilligan's Island. 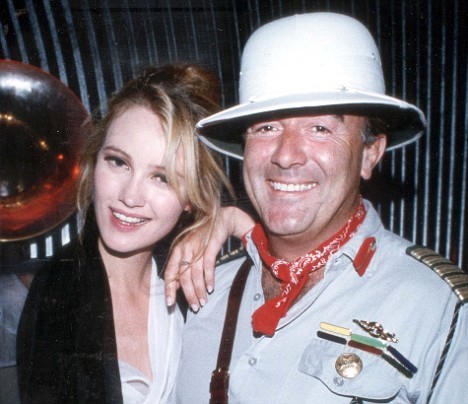 From his amazing obit in the Daily Telegraph:

"Sir Dai Llewellyn, 4th Bt, who died on Tuesday aged 62, became famous as a playboy, bon viveur and darling of the gossip columns, his reputation reflected in soubriquets such as "Seducer of the Valleys", "Conquistador of the Canapé Circuit", "Dai 'Lock Up Your Daughters' Llewellyn" or simply "Dirty Dai".

The son and heir of the gold-medal-winning equestrian baronet Sir Harry "Foxhunter" Llewellyn, and brother of Princess Margaret's one-time paramour Roddy Llewellyn, Dai Llewellyn was celebrated for his serial seductions of "It" girls, models and actresses, his relentless appetite for partying and his outrageous indiscretions.

Good-looking in his youth, with dark Welsh curls, his success with women was famous. He claimed, in his heyday, to be in the habit of going through Queen Charlotte's Balls "like a dose of salts". He insisted, though, that he "never got up in the morning and thought, 'I'm going to screw three girls today'." But: "If it happened, it happened."

If you happen to be at a Llewellyn's tonight, raise a pint for the man.