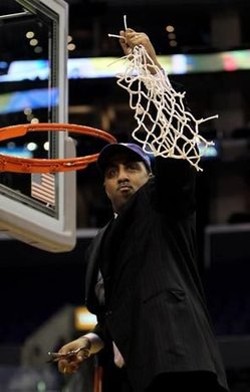 Image via the Seattle Times
These nets could've been yours, St. Louis
Full disclosure: The author is a graduate of the University of Washington, a four-year member of the school's student rooting section the Dawg Pack (aka Romarville) and one of the most rabid Husky fans on the planet. Now then, onto the post.

Have you heard the news college hoops fans? Saint Louis University is in the Final Four!

OK, it's the semi-finals of the College Basketball Invitational (a step down from the NIT) but still, the Billikens won a hard fought double-overtime victory over Wisconsin-Green Bay on Monday night and they take on Princeton tonight at 8 p.m. at Chaifetz Arena to advance to the tournament championship.

No doubt the SLU faithful dream of one day donning Northern Iowa's glass slippers and strolling into the Edward Jones Dome as Sweet 16 Cinderellas and media darlings.

Alas, with a team of all freshman and sophomores that wasn't going to happen this season. Simply finishing near the top of the A-10 is a pretty darn impressive showing for Rick Majerus and he deserves credit for rebuilding the moribund program so quickly.

But what if -- and this is a great big whopping what if -- Majerus never had the opportunity to coach the Billikens? What if they had retained Lorenzo Romar, now the head coach of the Sweet 16 success-story Washington Huskies after the 2002 season?

Let's debunk the hypothetical right away. The chances of SLU retaining Romar's services in 2002 were slimmer than someone constantly left eating Rick Majerus' buffet leftovers. Romar was raised on the West Coast and played his college ball at Washington. It is, by his own admission, his dream job. When Washington offered him the head coaching position, SLU -- then without even the allure of a shiny new arena -- was powerless to stop him from leaving.

(It should also be noted that when Romar left, SLU botched the opportunity to promote his top assistant, Randy Bennett. Bennett too is in the Sweet 16 this year as the head coach of Saint Mary's.)

But had the school made Romar some kind of Godfather offer, here's what they would have kept: the best coach in college basketball.

Homer hyperbole? Perhaps. Romar has yet to win a National Championship and thus he's not revered like Roy Williams, Coach K or Jim Boeheim but there is enough evidence to argue that nobody in the NCAA is better at recruiting, developing and educating young basketball players.

Prior to hiring Romar in 2002, the Huskies had been to the NCAA Tournament 10 times in 63 years. Romar has taken them five times, won the school's only two Pac-10 Tournament championships and their first regular season conference title. This is his third Sweet 16 with the Dawgs.

He is a phenomenal recruiter (luring former Show-Me State player of the year Scott Suggs from Missouri to play on this year's squad) and has produced a slew of NBA-ready players, including Portland Trailblazers superstar Brandon Roy, Jon Brockman, Spencer Hawes and Nate Robinson.

Most, this year's star Quincy Pondexter, stay all four years and leave Washington with a college degree -- a rarity in today's game. Of the 23 Washington players who have come through Romar's program, 19 have graduated.

He is universally loved by the school, the Seattle media, and opposing coaches. After Washington's buzzer-beater victory over Marquette in the first round this year Seattle Times columnist Steve Kelly called him "one of the treasures of Seattle sports." In that same article, UW's athletic director declared "I'd let him raise my own kids." Bob Huggins, coach of UW's Sweet 16 foe West Virginia, described Romar as, "a wonderful human being."

Tucked away in the Pacific Northwest, coaching in the Pac-10, in games don't start until 10 p.m. central time and are frequently delayed locally by the Blues post-game show (damn you FSN!), it's easy to forget that if Washington had gone with their first instinct and hired Gonzaga coach Mark Few instead, SLU could have shared Romar's success.