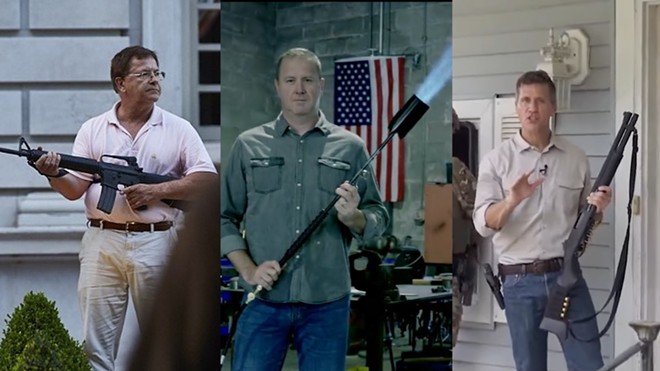 Primary season is upon us once more, Missouri, and with it comes the usual cavalcade of compulsively ambitious monsters, creeps and ghouls, clawing and flailing desperately in the hopes of securing your vote in an attempt to make their way into the halls of power.

And nowhere is that description more accurate than on the Republican side of the aisle. Ever since soon-to-be-former Senator Roy Blunt announced he would not seek reelection this term, thereby ripping open a fresh hellmouth from which the most hideous creatures imaginable have emerged, those slouching beasts have been crawling all over one another in the hopes of obtaining that most coveted of prizes: an endorsement from former President Donald Trump.

So far, Trump has declined to offer an endorsement in the race, but with the big day nearing, it seems likely that he will soon. In keeping, we're running down all the candidates most likely to get the nod — oh, and also Vicky Hartzler.

Candidate: Eric Greitens
Current job: Governor Navy SEAL Exercise instructor Unclear
Best known for: Resigning in disgrace as Missouri's governor after getting caught being a creep
Latest scandal we don't even have time to get into: Allegations of child abuse, spousal abuse
Weapon of choice: Piles and piles of guns, duct tape
Special skills: Shoehorning the words "Navy SEAL" into literally every conversation

All about Eric: Eric Greitens styles himself as a "political outsider," having seemingly forgotten that he was once governor of a whole state before he was forced to resign in disgrace. Now a private citizen after being run out of Jeff City over credible allegations of sexual assault and blackmail, Greitens is attempting to claw his way back into the hearts of Missouri voters by appealing to the thing they hold most dear: their love of guns.

In a recent campaign ad, a shotgun-toting Greitens made clear his intentions to employ paramilitary death squads to hunt down his insufficiently conservative opponents, which elicited some hand-wringing among his fellow candidates, but probably more so because they hadn't thought of it first.

Predictably, that threat of violence seems to have warmed Trump to Greitens after a protracted period in which the former president shied away from the former governor due to concerns among Republicans that Greitens' considerable baggage will cost the party what should be a safe seat. But with Greitens seemingly indicating he'd be willing to shoot Mitch McConnell in the face if elected, it's no surprise Trump is starting to come around. 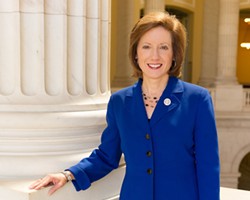 Vicky Hartzler Campaign
Vicky Hartzler is running for U.S. Senate and loves guns but has not made a campaign ad where she is brandishing one, unlike many of her opponents.

All about Vicky: An evangelical true believer whose love of God is matched only by her hatred of people who identify as queer, Vicky Hartzler won't let a little thing like having a gay nephew stop her from championing the anti-LGBTQ cause.

From her early days in politics as spokeswoman for the Coalition to Protect Marriage, which aimed to ban same-sex marriage in the state, to her recent transphobic campaign ad in which she declared, "Women's sports are for women, not men pretending to be women" (a sentiment that got her campaign suspended from Twitter), the pink-power-suited Hartzler has made one thing abundantly clear: no gays allowed.

Despite the naked bigotry, Trump isn't interested, and recently went so far as to release something of an anti-endorsement for Hartzler: "You can forget about Vicky Hartzler for the Senate from the Great State of Missouri," he said in part. That's gotta sting, but not nearly as much as the knowledge that people of the same sex can love each other openly without retribution.

Candidate: Billy Long
Current job: U.S. representative, Springfield
Best known for: Being an actual auctioneer, wearing a cool cowboy hat
Weapon of choice: The rapid-fire sound of his own voice
Redeeming quality: Drowned out far-right internet personality and untethered lunatic Laura Loomer by deploying his auctioneering patter when she crashed a House hearing 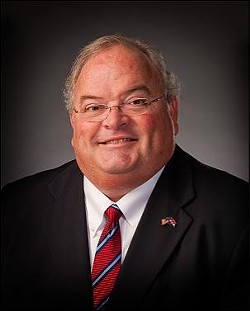 All about Billy: U.S. Representative and sentient thumb wearing a suit Billy Long was an early supporter of Trump, and has stood by the former president through all of his lies about the 2020 election, but so far Trump just ain't into him enough to reciprocate the love with an endorsement. But Long hasn't let that stop him. The folksy former auctioneer wasted no time in slapping on his signature white cowboy hat and loading up in his "Billy Bus" — a not-so-subtle homage to the "Trump Train" — for a barnstorming tour across the state, during which his apparent aim was to convince people to vote for him by eating ice cream in front of them.

As prodigious as Long surely is on that front, he's still been lagging far behind his fellow candidates in the polls, proving it takes more than a huge black-and-blue bus with your name and looming visage emblazoned on it to win over the savvy voters of Missouri. How that bus didn't impress Trump, though, we'll never know.

Candidate: Mark McCloskey
Current job: Disgraced lawyer
Best known for: Pulling a gun on a crowd of people for no good reason, then making that ill-advised decision his entire identity
Weapon of choice: An AR-15, until he surrendered that to the state. Lately, a chainsaw
Archenemy: Bees

All about Mark: In many ways, Mark McCloskey is the ideal Republican Senate candidate in 2022, in that his ambition is matched only by his complete ideological vacuity and his unwavering love of using firearms to threaten people with whom he disagrees politically.

As unafraid to make enemies as he is a complete asshole, McCloskey's greatest hits include relentlessly suing his neighbors, sister and father; asserting "squatter's rights" on a piece of shared property in his neighborhood, even pulling a gun on a neighbor over it; and allegedly destroying beehives owned by the Jewish Central Reform Congregation next to his home, which were meant to be harvested for honey for a children's Rosh Hashanah celebration.

Notoriously litigious, McCloskey and his wife, Patricia, even sued their way into the home they stood in front of in June 2020, barefoot and brandishing guns at an uninterested crowd that was just passing by. This level of unbridled assholery was enough to get the couple invited to speak at the 2020 Republican National Convention, naturally, and even landed McCloskey as an opener for some of Trump's rallies that year. Still, Trump has been ambivalent about his run for Senate, probably because it's clear to everyone but McCloskey that he doesn't have a snowball's chance in hell of actually winning. In any case, the most satisfying end to this primary season would be a shootout between Greitens and McCloskey in which both participants lose.

Tyler Gross
This primary season the ghouls have come out to run for office.

All about Eric: Following in the storied tradition of Senator Josh Hawley, Eric Schmitt has dutifully spent his time as Missouri's attorney general campaigning for what he hopes will be his next job as U.S. senator. For the most part, that's involved fastidiously tracking the latest fronts in the United States' ongoing culture wars, from mask-mandate mania to critical race theory panic to attacks on trans people — and then suing the shit out of everyone involved. Often that's the state's underfunded public schools, which then have to spend what little taxpayer money they're allotted on fending off the AG's legal attacks, which are also funded by taxpayers, thereby creating something of an ouroboros of perfectly wasteful spending. Oh, and he also sued China over COVID-19 — totally on behalf of the people of Missouri, not at all a transparent campaign stunt.

Of late, Schmitt's campaign ads have centered mostly on how tall he is (wow, 6'6") and the fact that he owns a blowtorch. "In the Senate, I'll turn the heat up on the Biden Democrats," he claims, which, given the state of things, presumably means he's going to light his political opponents on fire (Trump assuredly likes that). If elected, Schmitt will be extremely useful for reaching things on the top shelf on the Senate floor.