Missourians Petition to Remove Rush Limbaugh Bust from Capitol: "It's An Embarrassment" 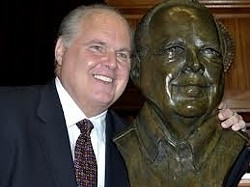 Is it time for the Rush Bust to go?

Last year, we chronicled one of the most important controversies at the Capitol centered on the decision to honor Rush Limbaugh in the Hall of Famous Missourians. It got so intense that security reportedly installed a security camera specifically to protect the bust from haters.

And now, one year later, there's a petition to dump the Rush Bust once and for all -- which over the last several weeks has collected nearly 6,000 signatures.

See also: - Rush Bust Unveiled in MO State Capitol Amid Lies, Secrecy and Bitterness - Giving the Rush Bust All the Honor it Deserves - Sculptor Hard at Work on Bust of Rush Limbaugh for Missouri State Capitol

"He's so vile and obnoxious and he has not done anything positive with his life," Heather Woodside, the 36-year-old St. Louis resident who created the change.org petition tells Daily RFT. "Everyday, I hear and read stories. He's basically a bully for innocent people.... He is just a terrible person." 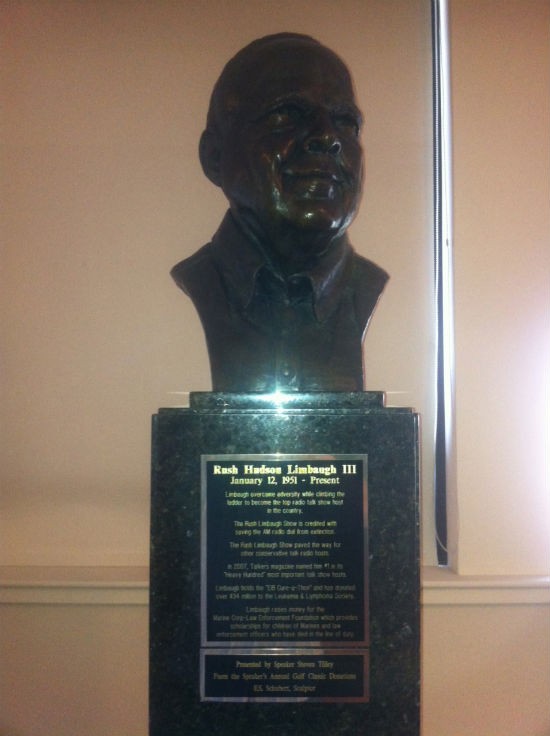 The decision to honor Limbaugh came from House Speaker Steven Tilley, who told a reporter at the time, "It's not the 'Hall of Universally Loved Missourians. It's the Hall of Famous Missourians."

The conservative talk radio host is from Cape Girardeau and got quite a lot of attention last year when he famously called Georgetown law student Sandra Fluke a "slut" and a "prostitute" after she spoke out for women's access to birth control.

The change.org petition has a pretty good summary of some of the more recent offensive statements Limbaugh has made. His bust sits alongside statues honoring Walter Cronkite, Walt Disney, Mark Twain and others.

"When it was inducted last year, I was very upset," says Woodside, who works as an administrative assistant at a two-way radio company. "I couldn't believe that we did such a thing.... Everyone who comes and visits will see him and may think that's what Missouri is all about.... It's an embarrassment."

The petition calls on the governor, lieutenant governor and the State Senate and House leaders to remove the Rush Bust. (Daily RFT reached out to Governor Jay Nixon's spokesman about this and has not heard back).

We need to remove a man's image who makes it his priority to demean women, people of color, immigrants, the working class, the poor and the LGBT community. He is not a positive example for Missouri. Please share! Thank you!