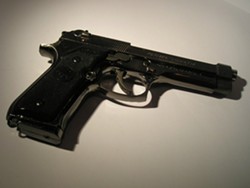 This was a terribly violent weekend in several parts of St. Louis, starting on the 3900 block of North Florissant Avenue at 2:25 a.m. on Sunday morning.

According to the St. Louis Metropolitan Police Department, four people were standing outside in an area adjacent to an apartment complex when someone opened fire on them. Four people were hit and one of them, 21-year-old Randy Lee Jones, did not survive.

He was not the only victim of this weekend's violence.

A witness told police he heard arguing just before the shooting. The surviving victims say they only heard shots but never saw anyone. Jones was shot in the chest, thigh, buttocks and abdomen, and doctors pronounced him dead at a local hospital. A 36-year-old man was in critical/stable condition after being hit in the abdomen and back. A 22-year-old woman who was also caught in the gunfire was shot in the back and a 33-year-old male victim was shot in the calf and shoulder. Both are in stable condition. There does not seem to be an arrest at this point and the investigation is "ongoing."

Google Maps
Apartment buildings on the 3900 block of North Florissant.

Last night, around 8 p.m., another young man was gunned down on the 8600 block of Park Lane, also in North St. Louis. According to police, the man was "in his 20's" and was shot in the head. Details are scant at this point and we will update when we know more, but this will count as the city's 76th homicide in 2013.

And those were just the deaths. Two more shootings from Saturday evening are currently under investigation according to the Post-Dispatch. One took place on the 3100 block of Magnolia, in which a 35-year-old suspect allegedly shot a 27 year old in the face and abdomen. The second happened on the 3000 block of Utah, where an 18-year-old man was shot in the back.

More as information becomes available. Click here for a full archive of this year's homicides and developments in the crime investigations.