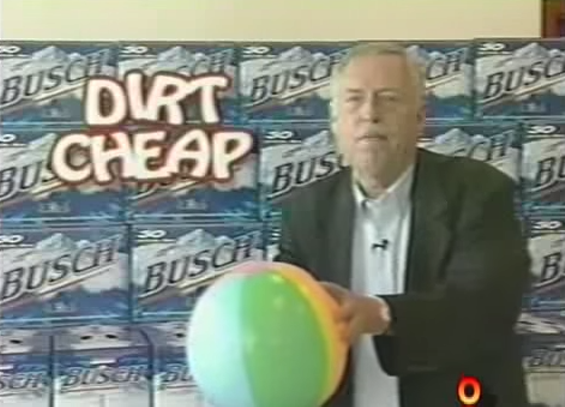 YouTube
See you at the crossroads, Fred Teutenberg. We expect you to have a cigarette and some "cheap, cheap" Beefeater gin waiting for us.

Fred Teutenberg, hero to the persecuted smokers and cheap drinkers of St. Louis, died of congestive heart failure at his Brentwood home on Monday, December 29.

The 75-year-old entrepreneur, who opened the Dirt Cheap stores chain, earned a special place in St. Louisans' hearts, not just for his reasonably priced alcohol and cigarettes but for the commercials that were always a party in themselves -- a party that included a giant yellow chicken wearing a bathing suit. 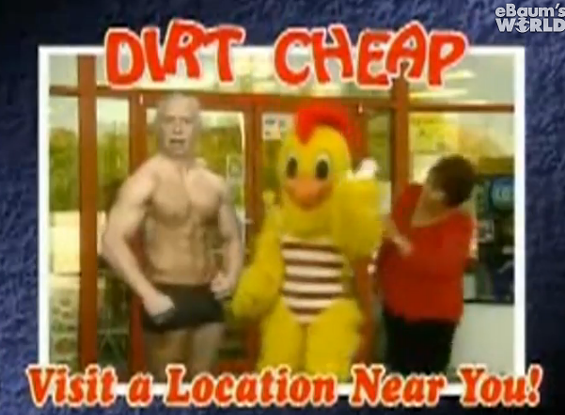 YouTube
The more you drink, the better Fred Teutenberg looks in this commercial.

Teutenberg wasn't afraid to star in his own wacky commercials written to convince St. Louis residents to buy their booze where it was "cheap, cheap" and "fun, fun." Here are two of our favorites:

In this work of cinematographic magic, Teutenberg physically embodies his famous saying, "The more she drinks, the better you look," by transforming into a hunky body-builder. "I don't know about you, but I need all the help I can get," Teutenberg tells the audience in his raspy smoker's voice. In this commercial, Teutenberg suggests customers buy a large wallet to hold their savings from Dirt Cheap because, "remember, size really does matter."

Teutenberg makes a special plea to smokers to buy their cigarettes from Dirt Cheap, saying, "We are the last refuge of the persecuted smoker." Teutenberg, a Webster Groves native, came from a long line of St. Louis restaurateurs and spent sixteen years building Dirt Cheap. He left in what he only ever described to the St. Louis Post-Dispatch as a mysterious "parting of ways" to found his own store, Fred's Cheapo Depot.

"I'm back to offer you all your favorite vices at cheaper prices," Teutenberg says in a Fred's Cheapo Depot commercial. There's no giant chicken this time, but there is a cartoon version of Teutenberg as a hockey player with a black eye.

Teutenberg and the Dirt Cheap chain liked to end commercials with the same helpful advice: "Have fun, and be careful out there."