St. Louis Man Drowns After Trying to Swim Across the Mississippi 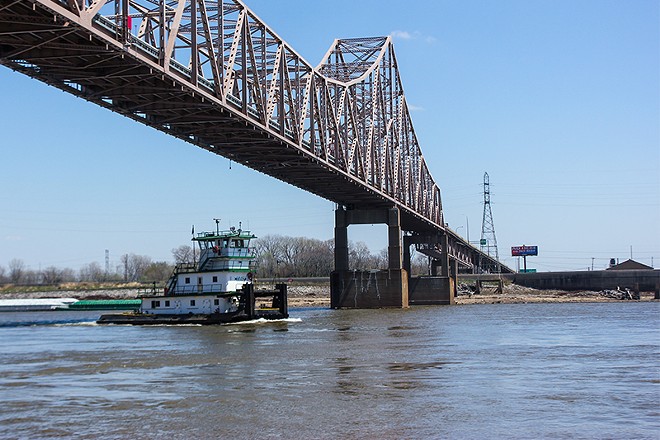 Police on both sides of the Mississippi River are investigating why two men in St. Louis attempted to swim across the waterway last week. The attempted crossing has left one man dead of suspected drowning.

In a statement, police in Monroe County, Illinois, called it "an unfortunate event."

The investigation follows the October 1 discovery of the body of Caleb M. Moriarity, 36, by a fisherman in rural Illinois. According to a report by the Republic Times, Moriarity was spotted in the water near Levee Road in the area west of Maeystown, Illinois, about 30 miles south of St. Louis.

Three days earlier, at around 5 p.m. September 28, officers with the St. Louis Metropolitan Police Department responded to a 911 call for help near Bellerive Park. Citing a police report on the incident, department spokeswoman Evita Caldwell tells RFT the witness alerted the officers that "he observed an unknown person in the river, and the person had hit a barge and went underwater."

When officers arrived, they found only one swimmer. He told police that he had been with a second person "when they attempted to swim across the river and the water current took them in separate directions."

The second swimmer eventually turned back and successfully reached the St. Louis bank. The report notes, "He did not observe the unknown male go underwater."

After the body was found near the Illinois bank, Moriarity was identified through his tattoos, said Monroe County Coroner Bob Hill. While the cause of death "is most likely going to be drowning," he added that the final determination is awaiting the completion of a toxicology report.

In an interview, Hill said Moriarty and the unidentified second man had tried to float across the river "with one using a log and the other using a raft."

Police describe Moriarty as homeless and a previous resident of Indiana. In a Facebook post, the Monroe County Sheriff's Department thanked police and fire officials from St. Louis for lending support during the search, as well as "two citizens who provided their UTV’s to assist in transporting first responders back and forth to the river during the recovery."

The Mississippi River is not a safe place for a swim. In 2018, a 41-year-old man jumped into the water at Cliff Cave Park "to see if he can make it across," KMOV reported at the time. The man was rescued by a boat and returned to shore in St. Louis.