MAX BOUVATTE
Ja'Ki Williams and Tylon Horton in the hallway at St. Mary's. The school recently secured a three-year lease to stay open.

Less than three months after the archdiocese announced the closing of St. Mary’s High School, the school officially announced at a press conference on Thursday morning that it will stay open.

President Mike England and Archdiocese of St. Louis officials initially confirmed the news to the RFT on Tuesday that they had reached a three-year lease agreement. The school will be renamed St. Mary’s South Side Catholic High School with religious sponsorship from the Marianists. 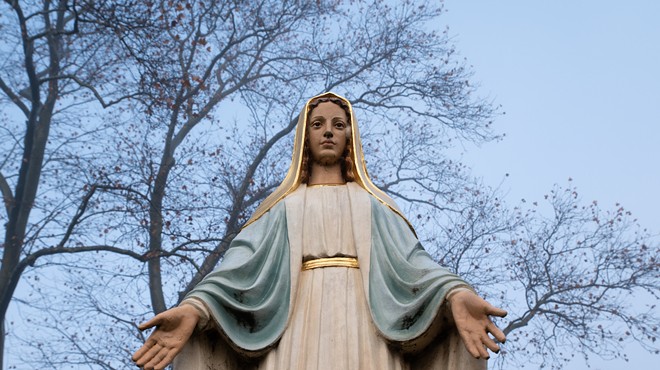 How St. Mary's Notched a Deal to Stay Open — For Now: Extraordinary efforts saved the all-boys Catholic school in Dutchtown after the archdiocese slated it for closure

Nearly 50 people gathered in the St. Mary’s gym for the announcement on Thursday morning, including administrators, press, staff, alumni and political leaders.

“Through adversity comes opportunity and we have a wonderful opportunity to build the school we have always hoped and dreamed,” England said during the 25-minute press conference.

After the announcement, the Archdiocese responded with positivity following weeks of discussions.

“We are pleased that conversations between St. Mary’s, the archdiocese, and the Marianists have resulted in this new canonical sponsorship for St. Mary’s as they move forward as an independent Catholic school,” Todd Sweda, Senior Director in the Office of Catholic Education and Formation and Superintendent for Secondary Education, wrote to the RFT.

In late September, the archdiocese announced it would withdraw support and close St. Mary’s as part of its consolidation and downsizing plan, “All Things New.”

The 27-acre St. Mary’s campus had served as a landmark in the Dutchtown community for decades. Founded in 1931 as South Side Catholic High School, over the years it produced nearly 13,000 alumni. But enrollment has continuously dropped in recent years, most recently the student population fell from 270 in 2021 to 216 in 2022.

From the start, though, St. Mary’s officials vowed it would fight to stay open as an independent Catholic school.

In less than three months, the school was able to make an unprecedented turnaround, raising over $3 million from five separate donors to keep the doors open. But the journey is far from over, as the school must raise about $10 million over the next five years.

In its most recent cover story, RFT documented the school’s response to the closing, with an inside look into how teachers, parents and students dealt with the uncertainty and how the school rallied to stay open.

As St. Mary’s embarks on its new beginning, Principal Valerie Todd told the RFT after the press conference that the school plans to introduce more opportunities for trade programs.

She expressed “excitement” and “relief,” for herself, the students and everyone in the St. Mary’s community, that the school can move forward.

“[We’ve been] just waiting, waiting,” Todd says. “I'm just excited to continue what we've been doing for so many years.”