Inside the Afterlife of South St. Louis Bars 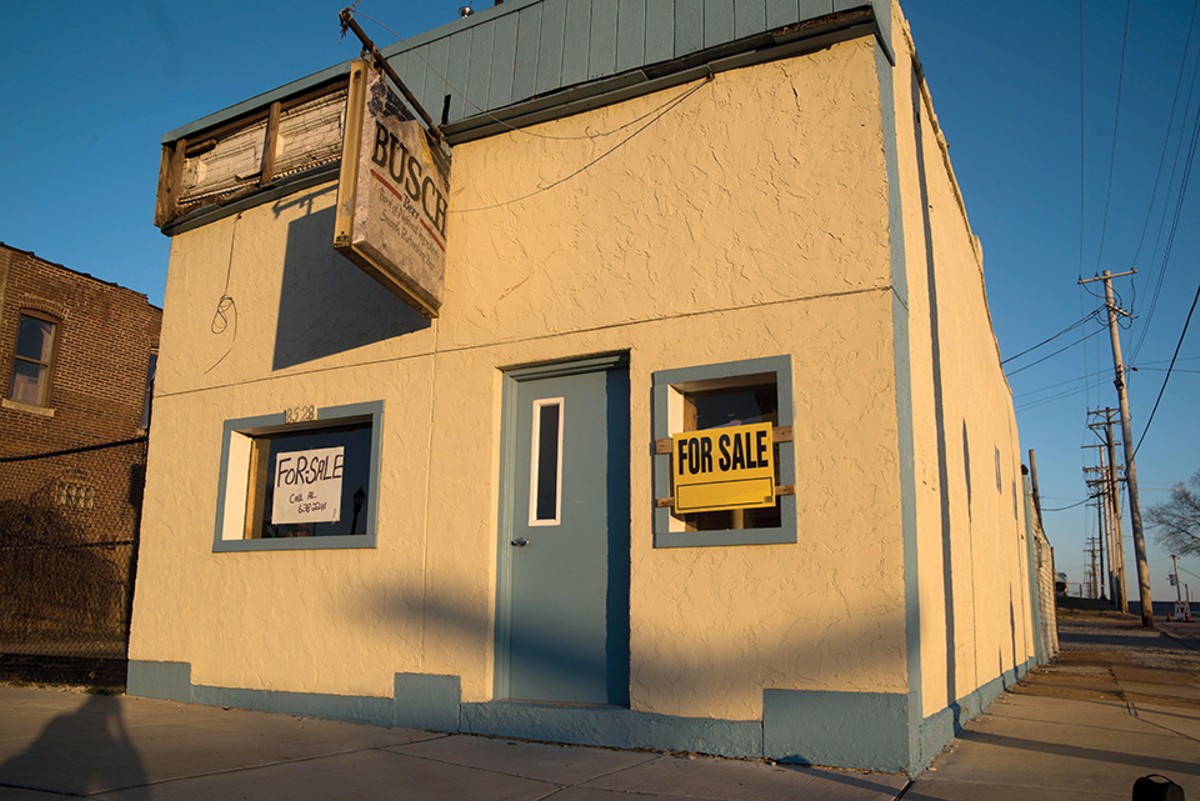 By the time I taught my last class at Webster University in the summer of 2014, my burnout level had achieved an advanced stage. I was that French fry at the bottom of the container, a once-robust potato product now reduced to a sliver of darkened, crispy mystery. Somewhere in the course of seventeen years, things had gone very wrong, and it was time to change things up. That interior renewal came in the form of an email received earlier that year, as a civically well-connected neighbor told me of a bar that would be for sale soon, located on the corner of Magnolia and Arkansas avenues.

The place had long intrigued me, having been a longtime programmer at KDHX, which was then just a stone's throw from the tavern. Before the place shut down in 1994, I slipped in a few times before an on-air shift and could well remember the basics of the place: a darkened tavern with a wooden hood over the backbar, a pool table on the small mezzanine level and an orange glow throughout. A basic workingman's vibe was the memory, with the feeling of a spot that was well geared toward regulars and not young tourists.

Since bussing tables as a teen at O'Connell's Pub in the 1980s, I'd spotted in bar and restaurant work alongside journalism and teaching. Once the latter "career" hit the end days by 2014, the appeal of a locked-away bar seven blocks from my house was too much. A small team was assembled, a pair of buildings were bought by one of the team members, and the spot opened after what felt like a forever wait of eight months. And only then did the real education in operating a bar begin. And it never let up.

With the last call of December 31, 2019, I planned to slide into a role at another bar being brought back from the dead in south city — this time as a manager rather than a co-owner. The idea was to open that place, then move on as operator to yet another dead bar, conveniently located next door. Dismissed from said project(s) about 75 minutes before signing HR paperwork, I began a nearly immediate, sometimes spastic search to find a new spot to hang my hat.

As any garden variety, life-changing experience can go, I've spent most of 2020 in a combination of excitement, education and anxiety; my factory setting comes with a default to over analysis. So, a quarter of the time, I long for my own space, while another quarter is wondering if I should just take on a job-job with another operation. The rest of my brain is an equal split between moving to New Orleans or wishing for a crack in the earth to emerge under my feet, delivering me to the nearest corner bar in the netherworld. Honestly, after touring well over a dozen buildings, researching as many more, cold-calling places, adapting thoughts on the fly and talking to potential investors, pop-up chefs and the generally curious, I'm kinda open to any of those four outcomes.

What follows is part travelogue, part nostalgia trip, part social experiment, part actual search for the perfect venue within the confines of the south side, from Highway 44 to the city limits, from South Broadway to Hampton Avenue.

In this process, I've realized that as a south citian for the majority of life, now a full three decades into being a legal-aged drinker, I've hit a lot of places over the years. A lot.

Driving around offers a weird memory mix. There's an electric company on Arsenal Street, out near the city limits, found in a little corner space. It used to be a bar called Waves. Why I can't find my keys on a given morning but know this bit of trivia, I cannot say. There's an intersection near my house, at Wyoming Street and Pennsylvania Avenue, where four corner bars were said to exist. In the 1990s I visited two of them (Corcoran's and Miss Blues), and by then a third was shuttered, with signage still in the window. How can a city resident/fan not think about what the world was like when a single corner held that many saloons? And, once upon a time, there was a bar called Dave's Den, somewhere in what's now the 20th Ward, which featured an entire bar full of clown art. This doesn't feel like a figment of the imagination, though I can't find any quick proof it existed.

Driving the streets, the bars keep coming. There's the old Frederick's Music Lounge. Bernard's Pub. The Foundry. Mom Pop's. Big Drink #1. Space. Rock Island. Sandrina's. AMP. Your Bar. The Office. Club Paladora. The Other Place. Frank's First Alarm. Little Gam's. The Blue Pearl. Somer's. Mary's Fine Food. The Double Bogey. And dozens more. It's not a small list, with some empty and abandoned, some adapted into new uses, some flattened. To drive, bike or walk by them is to have a little shock of recognition, of a memorable night somewhere along the line. 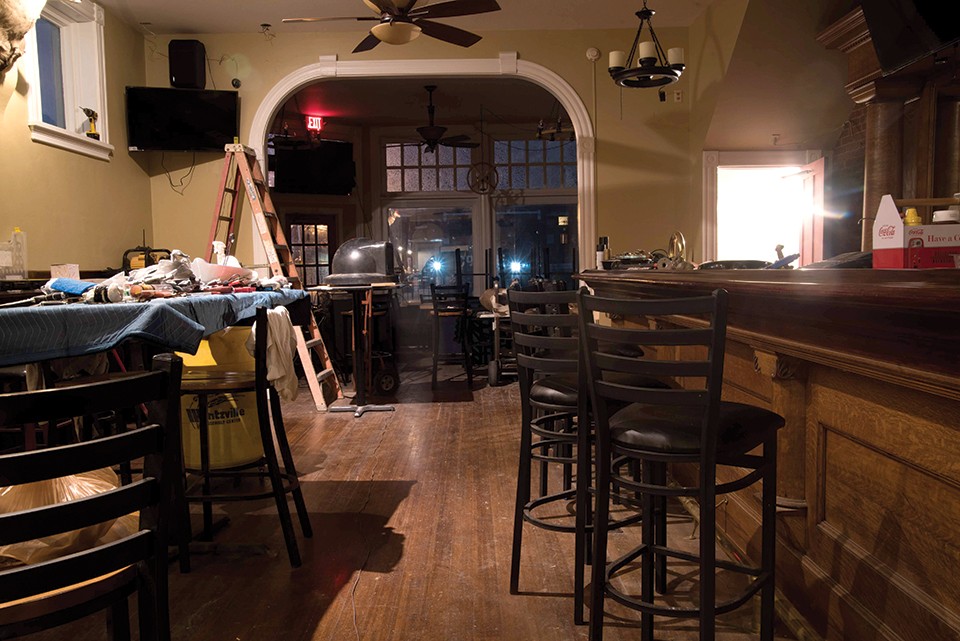 TRENTON ALMGREN-DAVIS
There are new plans for The Outpost, last known as the Indian food pop-up Baba Xavi.

When Mike Martz was the head coach of the St. Louis Rams, one of his more memorable press conferences had him dueling with the media, with Martz saying "yebbit, yebbit, yebbit" in response to repetitive questions, a play on the phrase "yeah, but." For a lot of intents and purposes, the phrase "yeah, but" could be applied to any situation involving development in St. Louis. The phrase is almost a constant when it comes to businesses involving food, drink and nightlife.

Top Golf is considering a facility in midtown? "Yeah, but there'll be light pollution." The Foundry's going to open? "Yeah, but it'll just pull people from other, already operating locations." There are some interesting bars for sale on Gravois? "Yeah, but cars travel too fast down that road, and no one would ever stop for a drink there." Too much parking, a lack of parking, poor signage, a downward trajectory of a neighborhood, the presence of a rough or racist clientele — all of these things and more can cause stress and second guessing. (Let's call it stress-guessing.)

Let's loop back to Gravois Avenue. Three St. Louis taverns were featured in 2016 on Bar Rescue, one of the barrel-scraping reality shows of recent vintage, and one of the taverns would be renamed The Beechwood. It's an impressive space, really, on the edge of Fox Park on Gravois. Going through the space, what is obvious is the cleanliness of it and the sheer size. There is a main barroom, a secondary bar behind a set of doors and a third bar in the basement. The show's refurbishing of the rooms left a larger-than-normal kitchen, seating for dozens, large walk-ins for both food and drink ... essentially, all the elements are in place. The "pro" side of the ledger felt fantastic, but a good-sized lease number had to be balanced against the hopes of a daily draw.

Toward the end, The Beechwood (closed for a couple years, save for a short-lived relaunch under new management in 2019) was like a lot of its south side kin: a day bar for the workingman. There are plenty of those types in and around south city. But this one's bigger than most, brighter than most, newer than most. The systems, the barstools, the parking lot. So much tipping the "pro" side of the ledger that it sounds like someone is going to bite on a good opportunity.

My own internal "yebbit" was calling out. Gravois isn't a walking block. Is the clientele from the nearby NexCore co-working space enough to provide a base of regulars? Can a bar so decorated in, quite literally, beechwood provide a more relaxed feel?

Sometimes you can't help but have "yebbit" in your brain. It's a St. Louis thing, doncha know?